Tapestry: The art of weaving a good yarn 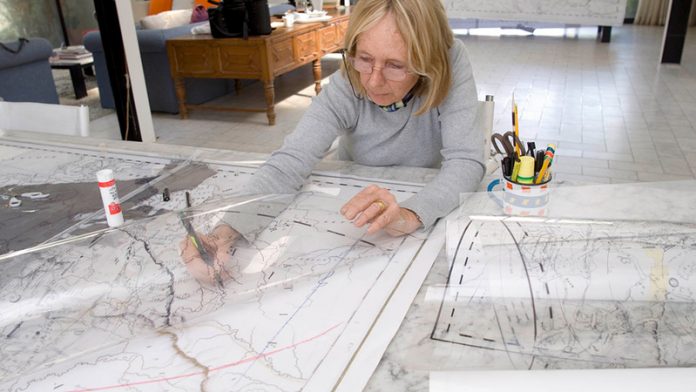 A drawn line rendered in mohair is an exercise in translation – and like any good linguistic translation it has the same power to sing and fly as the original. Ask weaver Marguerite Stephens.

The daughter of a woman who ran a weaving studio in Swaziland, Stephens has been weaving since 1962. It is her work you will see in the exhibition of tapestries translated from pieces by William Kentridge that opens on November 18 at the Wits Art Museum.

“I trained as an occupational therapist,” Stephens says, explaining how her 24-year-long association with Kentridge developed. “Apart from the medical side of the degree, we had to do a whole swath of craft. Weaving was the most versatile and, though I had a lousy time with it then, I found myself flung into it some years later, in about 1962, when I started ­translating Cecil Skotnes’s work into tapestries.” She subsequently worked with Egon Guenther, Cecily Sash, Edo­ardo Villa and Sydney Khumalo, and has “woven for some 40 artists” to date.

Stephens speaks of the reach of her work and discusses a tapestry’s authorship. “It is a translation like the translation of a book.” She refers to the tradition of translating tapestries from art works, which goes back to 14th-century Europe. “A tapestry’s scale is determined by the loom’s width. My largest loom is five metres.” Stephens started with a 2m loom in a shed in Sandhurst. The space she occupies today is near Diepsloot on four hectares of land. “I bought it in the 1980s. There was nothing here. “We don’t use sheep wool as is tradition in Europe,” Stephens says. “Goats are accessible here. But it’s quite sad: the market only wants white mohair. Most black goats have been destroyed because the mix of black and white wool is not desirable commercially.

“I did, however, manage to find someone who liked his little herd of black goats, so I get grey wool.” Stephens’s staff card, spin, comb and dye the wool in Swaziland. “We get dirty stuff, full of shit and burrs, in a huge big bale and it gets sent to my people in Swaziland. We do everything but ‘grow’ it. The goats need the temperature in the Eastern Cape and Lesotho, where they come from, to survive. They are quite ­vulnerable.” She adds: “I’m the only person who wants this wool in its purest form: it’s quite onerous; you can’t wear it. It is too itchy.”

‘The tradition of knitting has died’

She says that the tradition of knitting has died. “People don’t knit anymore out of need. Wool isn’t cheap. When I started, I did everything myself except the spinning. It took a very long time to weave a tapestry, from putting on the warp to making the bobbins … it’s a lonely and quite depressing task, done alone. You have to be at it eight hours a day before you see progress.” As Stephens’s commissions grew, alongside her skills in the ancient French gobelin style of weaving, she employed assistants. The first was Lillian Simelane, from Stephens’s mother’s studio. “She worked with me for about 20 years. She was terrific. She had a real feel for it.

“Then we got a commission for the Royal Hotel in Durban: it was 30 metres by three metres. I employed an 18-year-old Swazi woman called Margaret Zulu. It was 1978. Margaret is still my primary weaver. I now have 11 people working here – at one stage I had 17. The demand for these tapestries has dwindled. Collaboration is important; weaving is hard on the body. These works can take up to six weeks to make. You can translate anything – from collages to photographs with a lot of writing, maps. You blow up detail. You put acetate on it, and decide what is weavable and you draw it with a black marker. That gets photographed and blown up to the size.”

The tapestries’ staggering impact cannot be underplayed. Breaking the original into units the size of squares on graph paper, each stitch is determined by a grand narrative. “Text always gets pixellated. In order for it to be legible, it has to be more perfect than it is in the original.”

Her studio had humble beginnings and then “William exploded the work in a much more commercially vigorous way – at one point we probably lined the whole of Italy with his tapestries. But times are changing and commissions are not as plentiful as they used to be.”