Chippy unlikely to get a shakedown at arms deal commission 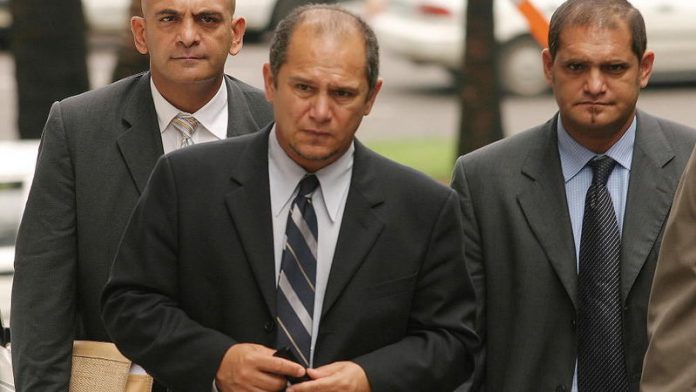 The crux of the case against Chippy Shaik – if such a case exists – is that he was key to influencing the awarding of bids to arms companies. This allegedly resulted in dodgy tender awards at hugely inflated prices – an allegation Shaik has denied.

But you would never know this just by listening to his evidence at the arms deal commission this week.

Shaik, who now lives in Perth, Australia, testified at the arms deal commission on Monday. He resigned from the Department of Defence (DoD) in 2002.

Shaik’s witness statement, by and large, is an unnecessarily laborious read. It is filled with irrelevant details of irrelevant meetings, lengthy explanations about protocol and policy formulation, and a brief history of the army.

But there are nuggets of information in the statement, mainly where Shaik denies influencing the awarding of contracts.

The decision to purchase the Hawk fighter jets without considering the cost implications is one of the most controversial in the entire saga. Not only was the ultimate decision expensive, but many allegations of bribery stem from it. Despite being the DoD’s chief of acquisitions at the time the deal was negotiated, Shaik denies having anything to do with the decision to exclude cost when deciding on the winning bidders.

An April 1998 meeting reveals that at the time, BAE Systems was the only shortlisted bidder.

Documents allegedly leaked from Britain’s Serious Fraud Office reveal that at one time, investigators thought they had uncovered a web of offshore payments from arms dealers to South African officials. The implication was that these payments were bribes – or “commissions” as they are referred to in the arms industry – paid so that BAE Systems, the builders of the Hawk, could emerge as the winning bidders.

Reportedly, in an April 30 1998 meeting where the aircraft selection was discussed, former Finance Minister Joe Modise cautioned the selections team that the cheapest offer was not necessarily the best, indicating that cost should be excluded from scoring the bidders.

Shaik does not note this in his account of the meeting. But he does raise another key point: the air force officials said the only way they would be able to afford the Hawk option would be through a cash injection.

The decision to exclude cost was in direct contravention of the government’s tender regulations, and it was flagged by the auditor general’s office during its early investigation of the arms deal.

Two sets of minutes
In his statement, Shaik recounts the events of a key meeting that took place on August 31 1999, when the Cabinet’s sub-committee dedicated to the arms deal decided to recommend the Hawk aircraft be purchased. Shaik says he minuted the meeting.

But another set of minutes exists, presented to the commission, that says a senior air force official actually drafted the minutes, and these minutes reflect a recommendation that further consideration should be given to which aircraft to purchase.

There is a tacit implication that one of the sets of minutes must have been forged.

Shaik says the secretary of defence, Pierre Steyn, who later resigned over the decision to purchase the Hawk aircraft, took serious issue with Shaik’s minutes.

Shaik then redrafted them after asking the various ministers involved to double-check his minutes. He says he never delegated the responsibility of minuting the meeting to anyone.

Shaik’s statement makes it clear that the ministers, including at one point the president at the time, Nelson Mandela, were regularly briefed on the acquisition process.

Case against Shaik
Then came the acquisition of the corvettes – a bid controversially won by the German Frigate Consortium (GFC). A previous witness, senior Armscor official Byrall Smith, told the commission that the GFC did not meet the minimum bidding requirements, and that the Armscor chief executive, Llew Swan, and Shaik were exclusively responsible for the decision to award the bid to the GFC.

Shaik denies this in his statement.

But he does not address allegations reported by the German press in 2007, that he asked for a R21-million bribe from one of the members of the GFC. The information apparently came from a leak within Germany’s prosecuting authority, which was investigating the arms deal at the time.

Another controversial issue raised by Shaik was the awarding of the combat suits to a company in which his brother, Schabir Shaik, had an interest via a subsidiary. Shaik did not recuse himself from the meetings where this bid was discussed, but says in his statement that he fully disclosed the alleged “conflict”.

Shaik’s statement does not address allegations that another winning bidder, Ferrostaal, financed a mining venture in 2004. Shaik contributed very little to the deal, financially, according to a report prepared by American law firm, Debevois & Plimpton. Ferrostaal has tried to prevent the report from being tabled at the commission.

Shaik’s evidence was set down for four days, but it’s now possible that it could last a mere two days. The Mail & Guardian understands that it is likely that the department of defence will cross-examine Shaik. Lawyers for Human Rights no longer participates in the commission, following the withdrawal from the commission of their clients, Andrew Feinstein, Paul Holden and Hennie van Vuuren.

Anti-arms deal campaigner, Terry Crawford-Browne, was not present at the commission on Monday. This leaves only lawyers representing the government to cross-examine Shaik; it is hardly likely that these lawyers will try to introduce allegations of malfeasance on Shaik’s part. The case against Shaik is unlikely to be made.