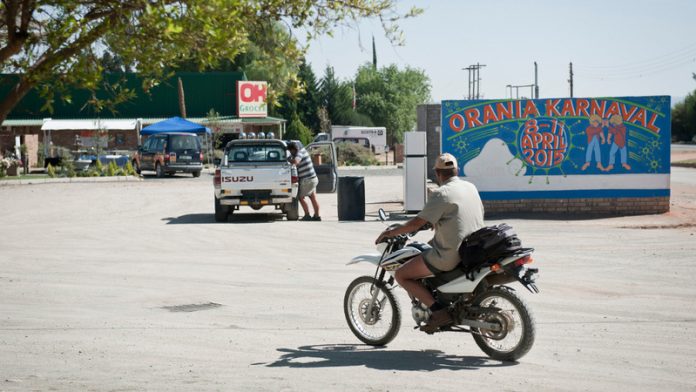 Outside his restaurant in what one could call Orania’s central business district, Quinton Diedrichs briefly thumbs through a copy of Michael Hammond and Hanlie Retief’s coffee-table book Orania.

He has seen the book before, he says, so he gives it a cursory once over and places it on one of the outside dining tables in mild disgust. “If you don’t live here and you saw this book, you would think this was a town of white trash. It’s not an accurate representation of the town.”

Granted, Hammond’s lens was a bit too preoccupied with the rickety and kitsch aspects of the town. But Diedrichs’s comments point to the fact that, beyond the supposed homogenising sheen of “culture”, Orania’s mantra, a complex reconfiguring of class is at play, which is difficult to ignore among the bustle of what is apparently a boom period.

The Northern Cape town in the arid Karoo was established in 1991 by the newly formed Afrikaner Freedom Foundation, which has since been renamed the Orania Movement. Founded as the practical manifestation of the idea of a volkstaat – a separate homeland for the Afrikaner – the town’s population has been slow to grow. But its public relations officer, James Kemp, says its population, currently about 1 100, has expanded by roughly 25% over the past four years.

Keeping things local
Frans de Klerk, the municipal manager, is reluctant to give out economic data on Orania, saying an updated study will soon be under way.

Of the apparent growth, he says: “People are looking for a place where municipal systems are working. The growth is driven by the quality of services we offer here. Businesses can’t take infrastructural risk. The economic model for Orania could be a model for large parts of South Africa on a local level. We have a local bank, a local currency, which motivates people to circulate the money in the community. Lots of salaries in the township are spent at the local grocer or the local bottle store and the money then leaves the community.”

De Klerk says the town provides social services (in the form of single-sex lodging and work opportunities) “because, these days, you get a lot of Afrikaners who are not in a good [financial] position”.

All around town, there are other signs of growth: a resort on the banks of the Orange River called Aan Die Oewe and commercial developments such as Oukarooplaas and Stokkiesdraai are in progress.

Although one might imagine a town full of dinosaurs resisting evolution, this easy typecasting is complicated by a rising number of thirtysomethings, some of whom have left thriving businesses and professional careers in mainstream South Africa to join the “ideal” of Orania.

A picture of former president HF Verwoerd hangs in a shop in Orania. Old Afrikaner memorabilia find a home in the town.

But the class striations are difficult to ignore. A man in a T-shirt and a worn cap sits on the edge of the restaurant’s terrace. He enjoys his Black Label in silence as Diedrichs banters with other customers and the media.

Diedrichs, a Unisa-educated former rugby player, came to Orania after a seven-year stint overseas that included England and France. The lock and eighth man played club rugby in France and established Golf 2 Africa, a golf tours company in 2004.

The lure of capitalism
In 2009, he set up Orania Toere, the first of his string of businesses in Orania. He loves to delineate the ideology behind Orania and uses the word “free market economy” a lot – always in praise of capitalism.

“Look, for me it’s not feasible to start a business and be told who I can and cannot employ,” he says, bemoaning affirmative action. “For me, that puts a damper on creativity and entrepreneurship. Orania gives me that long-term vision of a free-market economy.

“I can keep a small business in Pretoria with a turnover that is under R10-million a year and be exempt from BEE [black economic empowerment]  [Businesses with less than R5-million in annual turnover are exempted from BEE compliance]. A lot of Afrikaner-owned businesses bypass it that way, but you can be sure that the authorities will bring the margin down.”

The Irish monument was moved from Brixton to Orania.

About the cultural dynamics of the town, he says: “In Orania you have your low-income class, your middle class and the affluent, as you would anywhere else. It all boils down to the individual’s ability to participate in the economy. If you take the risk and work hard, you can rise to the top here. But, if you’re lazy, you won’t survive.”

Quizzed about the reference to working hard, Diedrichs says he is not blind to his privilege. “My parents were quite rich,” he says, “but they didn’t give me a cent – they knew me too well. I started Golf 2 Africa on a broken laptop.”

Diedrichs says he pays his workers R200 a day “as an incentive for them to work harder”. All of them are Afrikaners, in accordance with Orania’s ideology.

Orania, like the rest of South Africa, has lower, middle and upper-class residents.

Sarel Roets, a stocky 32-year-old former pastor, moved to Orania in 2012. He is developing a complex called Stokkiesdraai with funding from private investors, which includes 11 shops, two accommodation units, a conference centre and a medical centre. “When you have a good business here, it helps the community,” he says. “On the outside, people are in it for personal gain. Every brick I lay here is one brick for the idea of Orania.

“To make it here you have to understand the idea of using Afrikaner labour for a number of different reasons. Afrikaners have not done that before so it forces you to stop thinking about race,” he says. “It teaches you how to work with your own people, which in turn changes how you think about yourself. You’re paying people more and working with your own people, so you understand the problem of poverty more.”

The passion economy — loving what you do to earn a living