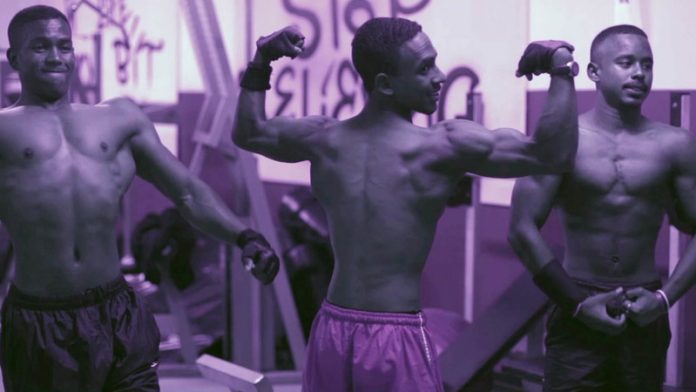 A far cry from its idyllic-sounding name, Lavender Hill has the reputation of being the most dangerous area in the Cape Peninsula. It’s a poverty-stricken environment rife with drug-related criminality and gangsterism – and all too regularly the lives of innocent residents and children are caught in the crossfire.

This is where Rui Solomons grew up. But the young man found a way to turn his life around: bodybuilding. Solomons is intent on enabling others in his community to do the same, and his motivation serves as the subject of a short documentary titled Lavender Hill Better Bodies. The documentary was co-directed by film major Michelle Madden and freelance production co-ordinator and amateur photographer Gabriella Achadinha. Achadinha first heard about Solomons through his brother, Bevan, while on the set of a music video shoot in Lavender Hill.

“The particular scene involved weights and, after some fun snap-taking, Bevan began talking about his brother’s success as a starting bodybuilder. He asked whether we would be interested in photographing him sometime,” says Achadinha, who was immediately taken with Rui Solomons’s infectious positive energy. “He’s definitely a go-getter, but there is also a sense of calm about him.” Solomons was introduced to bodybuilding through his coach, police constable Luqmaan Adams, and right from his first competition it was clear he had what it takes to do well. Coming in at no lower than fourth place, he’s brought home numerous medals and trophies as a relative newcomer to the sport.

Transforming the mind
The principal of his school, Faseeg Mani, describes him as a young man who is “typical of the type of learner … with every potential to become involved in the slippery slope of substance abuse and gangsterism”. But by transforming his body, he has also transformed his mind. “I never had goals or anything I wanted to work towards,” Solomons says. “Now, I’m mentally more focused on setting goals and reaching them.” This shift in his mind-set is significant and one that his mother wishes other children in the community would experience too. Lavender Hill is a dynamic space of conflict and innocence. “Walking through the flats, one is met with a multitude of young children playing games of skip rope and doing homework together,” Achadinha says.

On the other end of this spectrum, the secondary school Solomons attended recently installed a R1.2-million bullet-deflecting fence in order to prevent pupils from getting killed by stray bullets from warring gangs. “This puts into perspective the measures that the community has to take to protect their children, as well as the tumultuous space these youths grow up in,” Achadinha says. This is the environment that Solomons navigates daily and is determined to have a positive effect on. His ambition and dreams for the community are manifested in his business idea, Better Bodies, in which he envisions a gym for the community with free training and counselling. He’s working to involve pupils from nearby schools in bodybuilding competitions and, through these, to raise funds to plough back into the community.

In the documentary Lavender Hill Better Bodies, Solomons discusses his life in the suburb and what bodybuilding means to him as a tool to further himself and inspire other children growing up in the same circumstances. Children who face the threat of gang-related violence every day are more concerned with survival than thinking about their future. Though the threat of violence is ever-present, the mental turnaround Solomons and others like him have experienced speaks of the immense benefits that constructive recreational activities and a healthy sense of competition can have.

“I saw a new light,” Solomons says of his newfound direction, “and I’d like to show that to other children. I want to grab their attention, to inspire them to set even a single goal for themselves – to realise that they can become something in life.”

To watch the documentary, visit www.vimeo.com/109104599
This article is adapted from a feature that appeared on the creative showcase site www.10and5.com.

Slice of life: Boarding through the bullets