Marikana: The case against Mthethwa 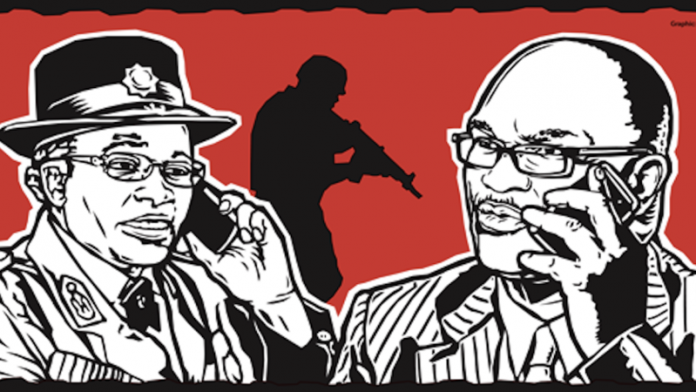 At the commission of inquiry into the Marikana massacre, the email correspondence between Cyril Ramaphosa, then a nonexecutive member of the Lonmin board, and other members of Lonmin management has received considerable attention. This correspondence, revealed in the first week of hearings, dates from August 15 2012, the day before the mass killing of the striking miners by police.

The significance of the emails has continued to be a subject of debate over the past two weeks, during which the commission has heard final arguments from the various legal teams. Whatever their significance may be, the exposure of the emails means we have a relatively clear picture of Ramaphosa’s agenda at the time.

The same cannot be said of the then minister of police, Nathi Mthethwa. Unlike Ramaphosa, Mthethwa cannot credibly claim to have been candid with the commission about his role in the events leading up to the massacre.

In the emails, Ramaphosa says he had been in contact with Mthethwa, and Mthethwa’s cellphone records in the week of the massacre were subpoenaed by the commission. There are also passing references to Mthethwa in recordings, initially concealed by the police, of a half-hour meeting of Lonmin managers with the North West provincial police commissioner, Zukiswa Mbombo, on August 14. This is the only “real-time” evidence that we have of Mthethwa’s role.

The cellphone records reveal that Mthethwa spoke to Mbombo on the evening of August 12, after receiving calls from Ramaphosa and Senzeni Zokwana, then the National Union of Mineworkers (NUM) president and currently the minister of agriculture. This was after the first spate of killings at the Marikana mines. Mthethwa also spoke to Mbombo by cellphone the following evening.

Mbombo met with Lonmin managers on August 14 – after the two conversations with Mthethwa. In the meeting, she indicated that Mthethwa had referred to “Cyril” in one of the calls and that he said Ramaphosa was “pressuring him”.

In her oral evidence before the commission, Mbombo made an about-turn on the latter point, saying that Mthethwa had not used the word “pressure”. This contradictory evidence is all we have of a record of anything Mthethwa actually said in the fateful days leading up to the massacre.

What the record of Mbombo’s meeting with Lonmin does clearly show is that Mbombo, as well as national police commissioner Riah Phiyega, took an explicitly political view of the situation. Rather than being concerned about the violence and loss of life that had taken place, they were worried about perceived threats to the power of the ANC and its allies.

In the meeting, Mbombo encouraged Lonmin to take a hard line with the strikers. This, she said, would counter perceptions, dating back to the strike at Impala Platinum (Implats) earlier that year, that Lonmin was being soft on the strikers to undermine the NUM and replace it with another union. At Implats, as at Marikana, many of the strikers had rejected representation by the NUM, a key ANC ally. This concern, Mbombo said, had been raised by Phiyega in a meeting the previous day.

Mbombo also focused on the role played by Julius Malema in resolving the Implats strike. At that time, Malema was still president of the ANC Youth League, but was already at loggerheads with the ANC leadership. He would be expelled from the ANC in April 2012, roughly midway between his intervention at Implats and the Marikana massacre.

The crucial issue for Mbombo was that Malema might intervene at Marikana and take credit for resolving the situation, an outcome she portrayed as undesirable – partly because he was an advocate of nationalisation. The risk that Malema might gain credibility is identified by Mbombo as a reason for the situation to be addressed urgently.

As with her concerns that Lonmin might be trying to marginalise the NUM, Mbombo’s concerns about Malema were said to have been discussed with Phiyega. Though there were other considerations too (the risk of the strike spreading and the costs of the police operation), the NUM and Malema issues seem to have been uppermost in her mind.

Information on Mthethwa’s communication with Phiyega is scanty. In his evidence, he indicated he had spoken to her on August 12, a conversation not reflected in his cellphone records. The records show he had one fairly brief conversation with Phiyega on the night of August 14, followed by a short call to Mbombo early the next morning.

That night, a special meeting of senior police officers decided that, in the absence of any other resolution, the police would launch an operation to end the strike the next day – on August 16.

Not surprisingly, in his evidence before the commission, Mthethwa maintained that he had played it entirely by the book. In his telephone conversations with Mbombo and Phiyega, he said, he essentially sought to establish what was happening at Marikana and to be assured that the police were in control of the situation. In their evidence, neither of them contradicted him. Yet the evidence we have renders this account of Mthethwa’s role doubtful in several ways.

In her evidence to the commission in March 2013, Phiyega not only said that she reported to the minister “using a multiplicity of platforms” but also that she talked to him “on a continuous basis”. If so, would Phiyega, during the Marikana crisis week, only have spoken to Mthethwa on the Sunday and then for less than three minutes by cellphone on the Tuesday night before the massacre?

The telephone conversations that we know of were mostly with Mbombo (three conversations, lasting a total of 14 minutes). All the cellphone communication took place outside ordinary working hours. Why would communication on the matter have been restricted to these times? Would Phiyega and Mthethwa not have discussed the Marikana situation in greater detail during ordinary working hours – and not by cellphone? It seems reasonable to assume that Mthethwa would have given at least as much, if not more, time to discussing Marikana with Phiyega.

Because his cellphone records were subpoenaed by the commission and because the recording of Mbombo’s meeting with Lonmin confirmed that he had spoken to her, he had no choice but to admit that he phoned her after Ramaphosa and Zokwana had called him.

But Mthethwa denied that any greater importance had been given to the matter as a result of Ramaphosa’s and Zokwana’s interventions. These calls, he told the commission, had not had any particular influence on his approach to the situation. “Anyone,” he said, “could pick up the phone and call me.”

If the reason the massacre took place on August 16 in the way it did could be reduced to one word, it is the word “urgency”. As emphasised by several people at the commission, the key question is why the police contingent at Marikana was pushed to carry out the operation at short notice on that Thursday afternoon.

The best explanation we have is that this driving urgency was to pre-empt any intervention by Malema. We know that these motivations did not come from Mbombo alone but had been discussed with Phiyega. Insofar as either was the “author” of these motivations, it is reasonable to assume it was the national commissioner.

Phiyega identified Mthethwa as the source of political leadership. In her March 2013 testimony, she said: “He’s a political leader. He gives us leadership in that space and support.” She repeated this point later. If her analysis of the situation was rooted in political concerns, would she have developed this analysis independently of her “political leader”?

It would appear that the motivation for urgency at Marikana was the political concerns articulated by Mbombo at her meeting with Lonmin on the Tuesday. It is highly unlikely that Phiyega or Mbombo would have felt justified in initiating the Marikana operation on the basis of their personal political judgments or anxieties.

Mthethwa must have given Phiyega reason for having confidence that he approved of the police’s approach. Mbombo, in turn, must have been reassured by either Mthethwa or Phiyega that this approach had high-level political approval.

There are strong reasons, then, to believe that Mthethwa’s role in shaping the police’s course of action at Marikana went far beyond what he has admitted to.