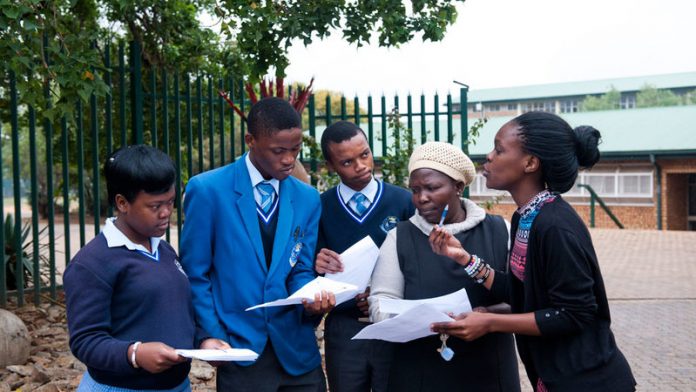 When the Gauteng education department promised recently to spend R15-million to fix sanitation at Tembisa schools by September 19, pupils and residents wasted no time in making sure the department put its money where its mouth is. They audited the toilets that 50 000 Tembisa pupils use every day.

Despite the government’s intervention, they discovered five of the schools still did not have enough toilets to meet minimum national norms for sanitation and thousands of pupils did not have access to toilet paper, soap and sanitary pads.

“We worked with parents, facilitators, ‘equalisers’ [pupils who are members of nongovernmental youth organisation Equal Education (EE)]; we went to principals and asked them different questions about the toilets and we also went inside the toilets to check how they are working,” Lerato Morotolo (20), community leader for EE in Gauteng, told the Mail & Guardian.

The Tembisa resident was standing outside one of the township’s 51 schools that was among the 48 that EE audited. “Schools are part of the community and the community is supposed to love its schools. Each and every person needs to understand what is going on inside schools.”

For the whole of October pupils, parents and EE staff went to schools with a list of the promises that Gauteng education MEC Panyaza Lesufi had made, as well as a questionnaire EE had drawn up, to check the condition of toilets, taps and supplies of toilet paper and sanitary bins. They compared the government’s promises of renovations to what had been done.

‘Unhealthy for our dignity’
Pupils the M&G spoke to said they did the audit because their dignity was at stake, and being proactive in fixing schools was critical.

“The taps, toilets, basins and sanitary bins are in a bad condition. You walk in and there’s water in the floor. If I want to use the toilet seats, they are broken … it’s unhealthy for our dignity,” Nicholas Izaks, a grade 12 pupil said. He asked the M&G not to name his school.

“How can I wash my hands if the taps are not working? That kills my personal health,” he said.

He became an “equaliser” because he did not want his younger brother to “face the same challenges I faced”.

“I want him to learn in a proper environment and good conditions with good sanitation.”

Making this happen means holding the government to account and helping it to keep its promises.

Meeting halfway
“Government should act on their promises, but if we they don’t act we are going to do some of it ourselves. It’s about meeting them halfway. If we act then it shows them how things need to be done.”

EE’s campaign for better sanitation in Tembisa schools started last year when it audited 11 high schools and found that, at more than half of them, about 100 pupils had to share a single working toilet.

Despite EE’s discussions with the department about this, the conditions remained much the same at many schools.

When Lesufi became education MEC in May this year he promised to fix all schools in Gauteng by the end of August. He missed his deadline and, in September, 2 000 EE members marched to his office in Johannesburg to demand better sanitation.

“He gave us this [document]. It says everything about the dates. When the work will actually take place and when it will end.” Izaks asked, standing in his blue school blazer in Tuesday’s rain.

Work is undone
Despite these promises, he said, the audit showed that at some schools “the work is undone”.

The audit results were sent to the department on November 3.

Adam Bradlow, co-head of EE in Gauteng, said the audit showed the department had “provided some form of substantive relief to 47 of the 48 schools we audited, including upgrading toilets, pipes, taps, ceilings, roofs and tiling” and this was “tangible evidence of the [department’s] commitment to provide dignity to pupils”.

But, he said, five of the schools “did not have enough working toilets to fulfil the minimum requirements prescribed in the norms and standards for school infrastructure” and “thousands of pupils continue to suffer without sufficient access to toilet paper, soap and sanitary pads”.

Basic Education Minister Angie Motshekga published the norms last November. They state that there should be one toilet for 43 female high school pupils and one toilet and one urinal for 100 male pupils.

This standard is lower than international and national standards, Bradlow said. “The World Health Organization [WHO] states that schools should have a minimum of one toilet plus one urinal for 50 male pupils and one toilet for 25 female pupils.”

Higher standards
Thirty-four of the schools audited did not meet the WHO’s standards. Bradlow said the Gauteng education department was in “a wealthy province and should aspire to higher standards” such as the WHO’s.

“If there are not enough toilets the sanitation blocks will easily become clogged and fall back into disrepair.”

A social audit is a powerful tool “for mobilising pupils and communities around a basic demand”, he said, and EE members would continue to use its model.

Departmental spokesperson Phumla Sekhonyane said the department has “procedures in place to deal with maintenance, and has completed a draft guideline to assist schools … The provisioning of additional toilets will be on the overall plan to be submitted to the minister by end of November.”