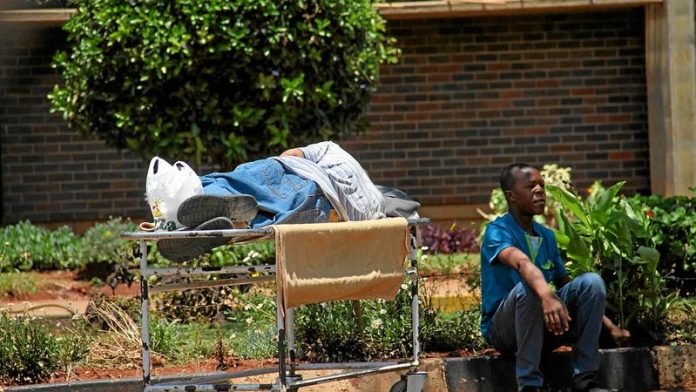 It’s midday outside the casualty section of Parirenyatwa, Zimbabwe’s biggest public hospital situated in the capital Harare. It feels as if the unforgiving heat is conspiring with the country’s politicians who have turned a blind eye on the suffering of patients.

The doctors’ strike began two weeks ago and is now in full swing with senior doctors having joined last week. On Tuesday, doctors at rural district hospitals also joined the strike.

In a country struggling with an ­economic slowdown, the strike has hit the poorest the hardest. Negotiations between the doctors and the government have not been successful.

A frail-looking Ashley Chaparira has given up hope of receiving treatment for injuries he sustained during a brawl at a music concert last week.

The city council’s ambulances never come when called out, so Chaparira’s friend carried him on his back and used ­public transport to get to Parirenyatwa. But they received no attention. All doctors were on strike and the nurses couldn’t offer help.

“We have no choice but to take him back to the clinic. We have been here since 7am and now it’s 1pm but he has not been attended to because of the strike,” said Tafadzwa, an unemployed graduate of Zimbabwe’s much-vaunted education system. He did not want to give his surname.

“This whole thing is now a merry-go-round because we have been referred back to the clinic, the very clinic which referred us here. We are just going back there but we know they will just send us away without attending to his injuries because they have no capacity. These are desperate times.”

About a hundred metres outside Parirenyatwa’s casualty section, 41-year-old Nyasha Matambanadzo lies in the burning sun. His nephew John wheeled him out in the open after spending hours in the hospital’s casualty section without being attended to.

Public and private care
The doctors are asking for a monthly salary of $1 200, up from the current $282, as well as transport, accommodation and risk allowances.

The strike has affected all the major referral hospitals, including Harare Central and Chitungwiza General in Harare and Bulawayo’s United Bulawayo Hospital, Ingutsheni Hospital and Mpilo Central Hospital.

Hopeful patients accompanied by their equally optimistic ­relatives continued to trickle in to Parirenyatwa. For most, this is their only hope. Doctors in ­private practices charge $35 per consultation on weekdays, $60 over the weekend and $70 at night, which is beyond the means of most Zimbabweans.

The public hospitals don’t ask for much. A patient must part with $5 for a new file. But the hospital also does not offer much: all other essentials – syringes, cotton wool and most medication – must be bought by the patient.

“It was cold inside for me so I asked my nephew to wheel me out so I can at least bask in the warmth of the sun,” Matambanadzo says in a subdued and despairing voice.

“I have been here since nine in the morning but there are no doctors. The administration staff tells us to wait but nobody can say for sure if we will receive any attention.

“They are advising us to either go to a clinic or seek the services of private doctors, but I cannot afford the medical fees charged by private doctors.”

Parirenyatwa is the country’s biggest referral institution, with 1 800 beds which cater for poorer Zimbabweans. It receives patients referred to it from rural districthospitals and clinics in Harare’s slums and townships.

A walk through the hospital reveals that most of the beds in the usually busy wards are unoccupied. Patients are either being turned away or discharged by the nurses. There is also little activity in the hospital’s theatres.

The stroke unit is almost empty, save for a few critical patients.

There are no doctors at the Annex unit at Parirenyatwa, which caters for mentally challenged people. Patients, including the hyperactive ones, are asked to leave. Nurses are only giving prescription drugs to patients who have exhausted their supply. There is no one to write out new scripts.

Across town at Harare Hospital, the situation is worse. Signs posted on the glass sliding doors of various departments advise the public that doctors will not be attending to anyone “until further notice”.

Street protests
The doctors have not taken to the streets. Zimbabweans don’t do street protests often. It’s a cumbersome ­process to get the necessary police clearance. And the brutality of the police against marchers is legendary.

Instead, doctors huddle in groups of four or five on the hospital premises, chatting to pass away time. Some even wear their scrubs and doctors coats.

“This is the only way to force this insensitive government to act,” says one doctor when asked if they don’t take pity on patients they can see being turned away.

“It [the strike] has led to the needless loss of life. We have a researcher working on the issue and we have found that at least 20 people die per day because of the strike in Harare,” Mlilo said in a telephone interview with the Mail & Guardian.

“The strike is also a reflection of the failure of governance as service delivery collapses while government leaders continue to engage in factional fights.”

Situation in Bulawayo
In Bulawayo, Zimbabwe’s second largest city, there is a similar outcry with Winos Dube, the chairperson of the Bulawayo United Residents Association, telling M&G that the situation is hurting the poorest the most. “The strike is running into its third week and this shows that the government is not prioritising the matter,” Dube says.

Speaking from his base at Parirenyatwa, Fortune Nyamande, president of the Zimbabwe Hospital Doctors Association which organised the strike, agrees that the strike is a blow to the poor.

He says that although the association did not have figures at hand, many “avoidable” deaths have been recorded and he blamed the government for being insensitive to the plight of patients.

The government reportedly ignored a 14-day ultimatum by the doctors’ association when the strike commenced on October 27, initially refusing to participate in formal talks with the association.

Nyamande says that on Monday the doctors had, however, met the secretary of the ministry of health who promised to look into their grievances.

“What is worrying us though is that the government’s reaction is not in tandem with the crisis at hand,” he said. “For example, here at Parirenyatwa, 11 of the 12 theatres have been closed and the one theatre which is still open is attending only to dire emergencies, not emergencies. Only those patients who risk dying if not urgently operated on are being attended to.”

Health Minister David Parirenyatwa could not be reached for comment and his deputy, Paul Chimedza, declined to comment saying he was out of town.

“The challenge we have for now is the finance. We are hoping the doctors can go to work while we address some of their grievances. It, however, looks like some of the issues will be addressed when we get a new vote in the 2015 budget.”

What happened to the once universally accepted idea of healthcare for all?
Read more
Health

Many people can no longer afford hospital treatment and medication, and the number of those with medical aid has fallen by a third.
Read more
Health

Mothers and babies at risk in Apostolic church ‘birth camps’

Leaders of Zimbabwe's Apostolic sects are warming to the idea of women giving birth at health clinics.
Read more
Africa

Zim hospital has to beg for donor cash

Zim: Health and education bounce back

In city centres people are resorting to digging wells and even the hospitals face a major crisis.
Read more
Advertising