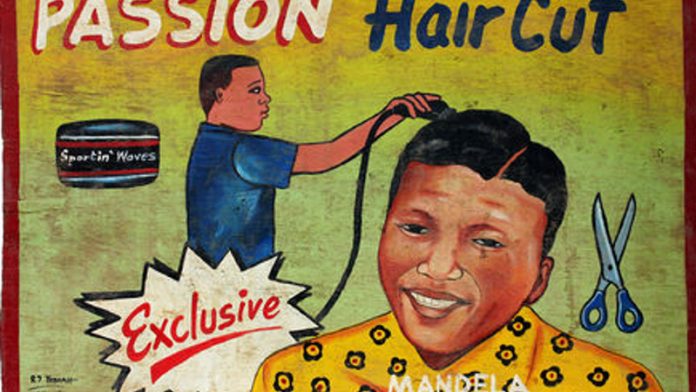 A collection of brightly coloured, painted barbershop signs lined the entrance to Doing Hair: Art and Hair in Africa, an exhibition that aimed to explore hairdressing and the sociocultural representation of hair in Africa.

Other hair-related objects, such as wooden makipo helmets (used during initiation rituals in Mozambique and southern Tanzania) and photographs by Pieter Hugo of black judges in white wigs, filled two levels of the Wits Art Museum (WAM) in Braamfontein, Johannesburg. The gallery space was divided into four parts during its three-month run, which ended this week: hair paraphernalia, hair and how it relates to society’s standards of beauty, barbershop culture and depilation.

Multiple television screens showed hair advertisements on a loop and one printed quote announced: “For hair that is straight and incredibly shiny, up your social status; get tweetable, likeable hair.” Unlike the exhibition’s dated images of African men with finlike hairstyles and barbershop signs circa 1970 and 1980 from countries such as Togo and Benin, this quote is only a year old – and yet it is loaded. It was lifted from a promotion for Luster’s Pink Smooth Touch Relaxer, a hair product aimed at black women who want to achieve straight hair that “might start trending”, according to its online commercial, which uses Twitter-speak.

Against a backdrop of similar advertisements, the politics of black hair was visible. This part of the exhibition clearly spoke to the legacy of colonialism and its attempts to erase blackness with no-lye hair relaxing creams and even shaving. It recalled Anders Kelto’s video of pupils shearing each other’s hair as they tried to get rid of the upper cut, which their teacher viewed as a hairdo for gangsters. The exhibition’s project leader, Lesley Spiro Cohen, says Doing Hair did not attempt to address hair politics and was, instead, a vehicle to attract new visitors to the art museum. “The exhibition is not about black hair; the exhibition is about art and hair in Africa. It’s broad,” she tells me.

In addition to this, Cohen, who heads up WAM’s strategy, planning and development, says the exhibition “was the first step in attracting the Braamfontein people … I did a quick walk around Braamfontein and there were 50 hair salons in the few streets that are immediately adjacent to us. So we thought that we would attract the Braamfontein hairdressers and their clients.” But merely touching on black hair in Africa is bound to raise political, racial and socioeconomic questions.

Lack of content
“While the exhibition makes extensive use of mixed media … that does not save it from the lack of content,” writes Vanguard magazine founder Panashe Chigumadzi. “What I, and the number of others I did a snap survey on, saw was that this is a shallow interpretation of hair on the continent. I did not learn anything new, except for the new ways in which I can be othered in South Africa,” says Chigumadzi, pointing to the mainly white curatorial team of 10.

Reacting to such disapproval, Cohen points me to the exhibition’s accompanying catalogue. “[It] really responds to the criticism and [its] essays relate to each part of the exhibition.” And it does, as artist and researcher Pamela Phatsimo Sunstrum addresses “othering” and curatorial intern Shayna Goncalves delves into beauty constructs.

But at R250, the catalogue might not be accessible to the Braamfontein students and hair-salon clientele the museum hopes to attract. Despite this, Cohen says the exhibition attracted hordes of young people, passers-by and hair stylists. A competition held in the run-up to Doing Hair, which was sponsored by the Black Like Me hair products company, invited professional and student stylists to showcase their art.

“We never really talk about black hair, so this show has been a great initiative,” Mzeezolyt, one of the competition winners, tells me. The Boksburg-based artist operates a mobile salon, going to clients’ homes to do their hair. She says she has “been getting more customers and doing more home calls” since her win.

Despite the applause the gallery gets for having attracted more visitors and more clients for its hair competition winners, this was a missed opportunity to dig deeper into a topic that merits more than merely being used as a carrot dangled on a stick.

‘The Plague’, an allegory of the Nazi occupation of France in World War II, is about a town’s fight against an epidemic. It’s a relevant read in the times of Covid-19
Read more
Advertisting
Continue to the category
Coronavirus