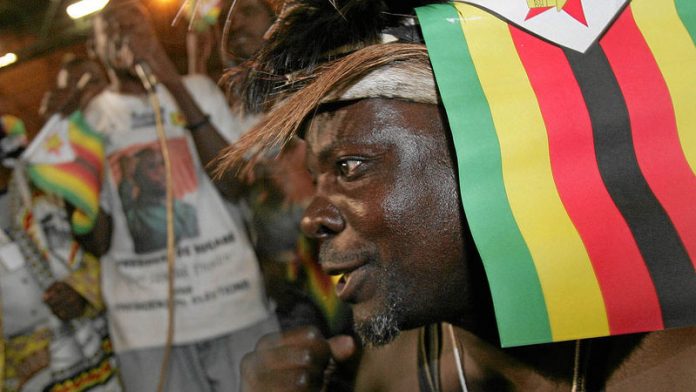 The 27-page document found the running of the three-day voting process, excluding delays in urban areas Harare and Chitungwiza, to have complied with the legislative requirements and to have been free of violence and/or apparent ballot tampering.

But the judges weighed this finding against pre-election activities such as intimidation and the deaths of 107 mainly opposition members and lengthy legal battles to change laws in favour of Zanu-PF, largely around citizenship and the reduction of polling stations in urban areas, where the strongest opposition party Movement for Democratic change had its largest support base.

The report objected to the Zimbabwean government’s failure to respect and implement recommendations by the Supreme Court of Appeal and the high courts.

‘No prospects of success’
The findings of the Khampepe report were made public on Friday following a Constitutional Court judgment on the same day, in which the court rejected an appeal by government against an appeal court judgment that found the documents should be made public. The Constitutional Court dismissed the application on the grounds that it “bears no prospects of success”.

Mbeki had tasked the two judges, now serving on the Constitutional Court bench, with leading the Judicial Observer Mission to cover the March 8 to 10 Zimbabwe presidential elections and drawing up a report on their observations.

Despite claims from some observers that Zimbabwean President Robert Mugabe’s Zanu-PF had used violence and the changing of citizenship rules to sway the vote in his favour, the Khampepe report, as it became known, was never released to the South African public.

Mbeki continued to endorse the Zimbabwe elections and support the view by the South African Observer mission (SAOM), which oversaw the elections, that they had been “legitimate”. This was the view of its leader, Sam Motsuenyane.

On March 13, the SAOM told reporters in Harare that the participation of the opposition in the campaign legitimised the outcome of the elections.

In going out to vote in large numbers, the Zimbabwean people had “demonstrated their commitment to expressing their will in determining who should be their president”.

The report concluded that, based on their observations, it “is the view of the SAOM that the outcome of the 2002 Zimbabwe presidential elections should be considered  legitimate”.

Mbeki continued to dismiss the importance of the Commonwealth Observer Mission report, which highlighted a number of irregularities that are now listed in the Khampepe report.

The Khampepe documents were handed over to the M&G‘s lawyers on Friday afternoon following the Constitutional Court judgment.

M&G‘s lawyer Dario Milo of Webber Wentzel was delighted with the judgment, saying: “We are ecstatic that a five-year battle has finally come to a close. The judgment is a resounding victory for guaranteeing the rights of access to information.

“Now that we have seen the report, it is clear that the presidency had no basis to withhold this report in the first place. It is an indictment on the office of the presidency that it litigated this case.

“The office acted contrary to the values of openness and transparency enshrined in PAIA [the Promotion of Access to Information Act] and the Constitution. Three successive presidents opposed the report’s release when they should have known that the public had a clear right to know, and when they should have known that their opposition was baseless and dilatory,” Milo said.

The document weighs up a number of concerns and attempts to offer a balanced appraisal, choosing not to review allegations that the Zanu-PF received more coverage via state-owned media, radio in particular, than the MDC and the three other candidates.

Instead, the report occupies itself with the last year and few months leading up to the election.

It points out that the 2002 elections were a turning point in Zimbabwean electoral history – seeing the Zanu-PF going from a 93% majority in the 1996 presidential elections to just 51.9% in 2002 “demonstrated Zanu-PF’s dramatic decline”.

Consequently, it would mean that the stakes for these elections were high.

It was principally the pre-polling and other environment that informed our assessment of the conduct of elections. We recognise that the opposition parties fully participated in the electoral process up to the end. We acknowledge that on polling days, no significant irregularities have in Harare and Chitungwisa occurred, the report said.

Milo said: “This landmark case will teach public bodies that you may be able to run for a while, but you can’t hide.”

The judgment vindicates those who have continued to question the freedom and fairness of the March 2002 elections for the past decade.