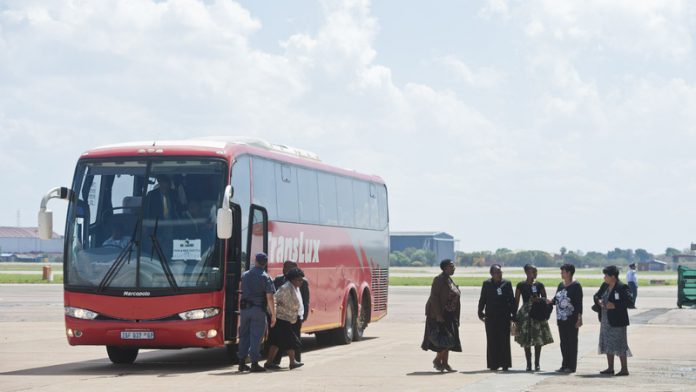 “I just want to bury my daughter,” Tsietsi Molebatsi, father of one of the women killed in the Nigerian church building collapse, told the Mail & Guardian on Sunday.

“I loved and adored her, she was my baby.”

He was speaking at the official reception of the bodies of 74 South Africans who were killed when a building belonging to the Synagogue Church of All Nations – led by preacher TB Joshua – collapsed on September 12. The reception was held at Waterkloof Air Force Base.

Despite South Africans expressing anger over the nine-week wait for the bodies to be returned, Molebatsi said he “feels good” to receive his only daughter’s body.

“As the head of the family I needed to stay calm and be strong. All I said was ‘I will wait for the mortal remains to return’”. “I am grateful to Jeff Radebe [Minister in the Presidency] for fast-tracking the process… I know there are people who say ‘why didn’t he go back then?’ but the fact is he went now.”

A total of 116 people died in the incident. Of those, 84 were South Africans. A cargo aircraft carrying the bodies of only 74 of them touched down at the air force base on Sunday morning. The bodies will be transferred to provincial mortuaries where families could collect them for burial.

Speaking at the official reception on Sunday, Radebe, who had been in Nigeria this week leading the 100-person repatriation team, said the South African government will “leave no stone unturned until we receive all mortal remains”.

It was unclear why the other seven bodies had not been returned yet.

Healing
Deputy president Cyril Ramaphosa said South Africa would “intensify [its] efforts to ensure that the remains of those still in Nigeria are returned home”.

He expressed his condolences and went around shaking the hands of the families at the event.

“What we can be content with is that the remains are now back home and … we can lay them to rest so that we too can find peace and rest and we can find healing,” he said.

He also said the tragedy had “reinforced the warm and paternal relations between the two countries”.

As the names of the victims were read out, the area where more than 200 family members were seated bristled with government-hired psychological counselors waiting to offer support to families.

Emotional
Government officials ran down the aisles between the rows of family members handing out bottles of water. At least two family members collapsed and one was wheeled out on a gurney.

Commenting on the time it took to repatriate the bodies, Mawela Mbedzi, a family member, said: “God is in control of everything.”

“It was tough hearing about my daughter but we, as Christians, understand death.”

His 30 year old daughter, Mpho, had been a lab technician.

He did not believe that it was structural faults in the building that caused it to collapse, as has been alleged, but that it was because the “[our] one enemy… took a chance”.

That enemy was “the devil”.

He thought Sunday’s event was “super”.