A clever telling of a Fool’s story 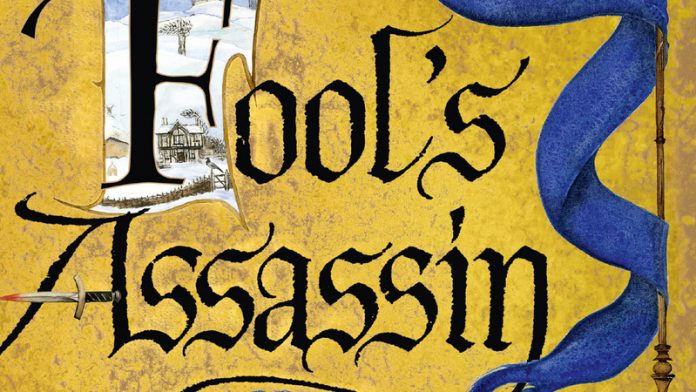 It was in 2003 in Fool’s Fate –the final book of the Farseer Trilogy – that we last met Robin Hobb’s most popular protagonist, spy and assassin, FitzChivalry Farseer. Though all but three of Hobb’s 17 novels under that name (she also writes as Megan Lindholm) have been set in her world of the

Six Duchies, that world has been extensive enough to provide multiple settings: the corrupt, bustling milieu of the Bingtown liveship traders; the high seas and exotic ports of Jamaillia; and, most recently, the magical ruins of Kelsingra, at the farthest reaches of the Rain Wilds River.

Fool’s Assassin, which opens the third Fitz trilogy, postdates the Rain Wild Chronicles, but takes us back to the heartland of the Duchies: the royal court at Buckkeep and the prosperous Withywoods countryside where Fitz, retired into the identity of landholder Tom Badgerlock, is married to childhood sweetheart Molly and managing the Farseer ancestral estate.

These new responsibilities, and much sadness – over the murders he committed; the death of his wolf companion; and the disappearance of his beloved friend, the Fool – have matured Fitz, although the awkward, rebellious, abandoned urchin isn’t too far below his surface, and too many magical healings mean he hardly ages.

The Duchies have matured too. With ancient enemies apparently vanquished, the realm has become sophisticated, complacent and even frivolous. For a ball, Molly forces Tom into the latest fashion: Jamaillian trousers. But shadows gather. A series of messengers fails to reach him; snatched or killed on the brink of speaking.

‘Parenting and parentage are key themes’
Strangers watch the house. His manipulative former spymaster, Chade Fallstar, constantly reminds him of his own brutal past, of the enemies who survived, and of the obligations that keep him in thrall to the state. Molly ages, but, after a mysteriously long pregnancy, gives birth to a tiny, preternaturally mature child, Bee. (Although Tom/Fitz remains maddeningly obtuse about Bee’s true nature, it – though not its cause – is soon clear to the reader.)

Hobb cleverly knots this new narrative into the fabric of her world’s history, as we look over Fitz’s shoulder and learn more about his response to previous events (including the scarring hurt of his bastardy) than we ever knew before. Parenting and parentage are key themes. Fitz’s unresolved anger at his father’s denial, and his love for the gender-fluid Fool as soulmate, brother and parent-like nurturer now finds echoes in his prickly, guilt-laden relationship with his long unacknowledged older daughter, and the trials of being a widowed father to Bee.

Her parentage, in turn, is haunted by genetic mystery. Hobb has conceded her admiration for Tolkien, and her rural setting initially feels rather like the Shire: market fairs; bucolic inns; rosy-cheeked retainers; jolly itinerant fiddlers. That doesn’t last.

Rather, this book is Hobb in John le Carré’s territory, not only in the truism that old spies can never quite escape their pasts, but also in the paralysing miasma of incomplete and too-complete memories and unarticulated regrets that Fitz cannot dispel.

The tiny domestic details
Shutting himself away in his study, he works on an autobiography – not to tell, but to discover, the truth. Travelling to market, he finds a sinister space where showmen torture animals and mobs beat up beggars. Pacing the instalments of her various series has not always been Hobb’s strength.

Fool’s Assassin has almost the feel of a prequel for its first three quarters: a leisurely (though increasingly dark) detailing of domestic circumstances. The domesticity refreshes, running against the grain of much current epic fantasy. But as the book concludes, revelations and helter-skelter violence and death take the tension to precipice edge.

All those tiny domestic details – ornaments on shelves, house plans, Fitz’s research jottings on the Fool’s “Golden” species – begin to feel significant. The wait for volume two will be long and frustrating.