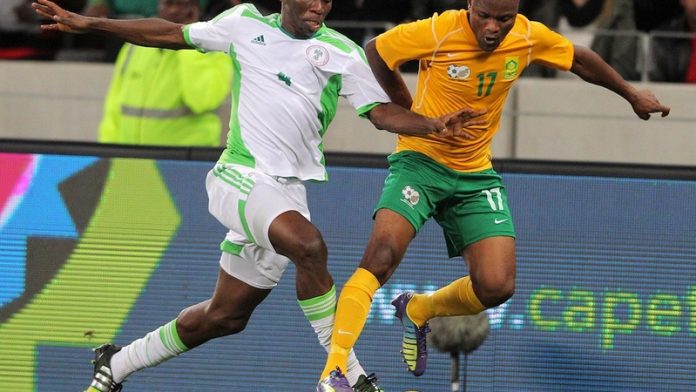 An unbeaten run through the preliminaries, with three wins and three draws, ensured top place in Group A and the shock elimination of the defending champions. Nigeria will now not be able to defend their crown at the finals in Equatorial Guinea.

Instead, a rejuvenated Bafana Bafana, revelling in the no-frills approach of the veteran coach, find themselves in with a real chance, given the poor form in the qualifiers of several of the top contenders, such as Ghana and the Ivory Coast.

The performance in Nigeria’s new showpiece stadium in Uyo on Wednesday will have added to their growing self-belief, although South Africa were denied a historic triumph against a previously much-feared foe by a late home equaliser.

A shoring up of the defence with more experience added to the back four and midfield contributed, but it was the individual power and pace of Tokelo Rantie that swung the game in South Africa’s favour. The goals lifted his international tally to eight, proving that, when on song, the bulldozing forward from Bournemouth can be devastating. He now needs to work on consistency to ensure his performances of the past 10 days have not been a mere flash in the pan.

Essential
Last weekend’s victory over Sudan emphasised how much Thulani Serero can change things around for the team and how essential it is to have him in the midfield for his creativity and work behind the attackers.

He is wasted as a right wing but when he cut inside against Sudan the team suddenly came to life and there were patches of the game in Durban when Bafana showed Nations Cup-winning potential. It was a pity he was injured on Wednesday night.

Serero had not been picked for Mashaba’s first two outings but increasingly the coach has abandoned the headline-seeking nonsense about building a team for future World Cups and tweaked his starting line-up into what it should be – the best XI that South Africa can send out on the park.

Tefu Mashamaite’s elevation to the back four, Anele Ngcongca’s return to right-back and more judicious choices off the bench prove all the talk about “Vision 2020” has no place in the arena of international football.

It is a pity an ankle injury robbed Lehlohonolo Majoro of a chance to show that he is maybe a better option to Bongani Ndulula up front.

Mashaba says he now wants at least three warm-up games before the finals kick off on January 17. Bafana will know the identity of the group opponents in Equatorial Guinea when the draw for the groups takes place on December 3.