Getting under the skin of the new SA with Masande Ntshanga 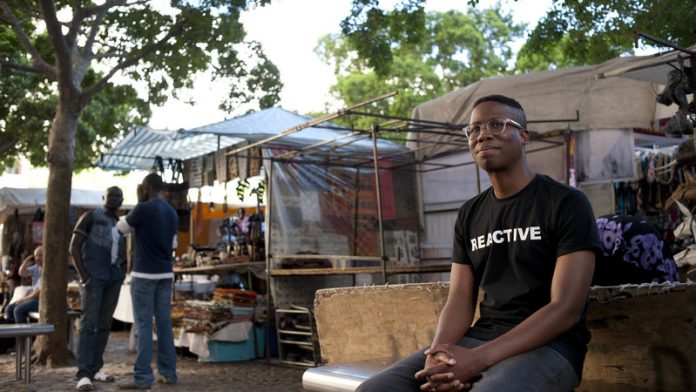 Masande Ntshanga’s debut novel ‘The Reactive’ follows an HIV-positive young man who is dealing with the long-lasting trauma of his brother’s death by selling his antiretroviral drugs, chewing a lot of khat and drifting around suburban Cape Town with his friends. Describing the novel baldly, though, ignores its immense thematic depth. Nick Mulgrew sat down with Ntshanga to discuss one of this year’s most startling novels.

You came to prominence in 2013 when you won the inaugural PEN International New Voices award with your short story, Space. You had published only a few stories before then. It must have felt like a quick ascent.
Honestly, it couldn’t have come at a better time. I was going through a hard time, working on a project – a novel set in the rural Eastern Cape in the near future – that wasn’t taking off. When I started writing Space, I initially didn’t feel like there was much in it. But the pressure of the competition made me realise that I just had to follow my inspiration.

And then that catalysed you into starting work on The Reactive?
Absolutely. After I wrote Space, I put aside that first novel and started making a lot of headway with this one [The Reactive]. There were a few things, I suppose, that I ended up learning while I was writing Space.

Like?
I realised that motion is very important when you’re writing fiction. And urgency – something had to be at stake.

The first novel had a very wandering narrative. I was very involved in creating this world for my readers, and not involved enough in energising it. In writing Space I learned to remove myself from my writing and to let one thing in the plot lead into the next.
Space and The Reactive are quite similar, not just because they both deal with HIV, but also because they also deal with the listlessness of youth, about people living in the vicinity of great trauma, and about people who are waiting for something, but who aren’t quite sure of what that thing is.

In The Reactive, I wanted to write something about someone who was trying to evade everything in their life, someone who lived in a suspended state. I wanted to deal with something in this novel that was not only real, but something I could be intimidated by. The inspiration came when I was at home in King William’s Town. I tried to take a step back from myself and tried to become perceptive to what other people were going through in their lives; about how people operate, about what communities are moving from and working toward.

I realised that we’re all just trying to survive, to strive against mortality, against death, against grief. I wanted to find a new way to think about these things – to treat the idea of death in the novel – in such a way that these things seem a lot less daunting when you come out on the other side.

As well as being a narrative device – a sword hanging above your protagonist’s head – you treat the theme of HIV in a very clever way: you situate the novel in the early 2000s, a tumultuous period in the history of how South Africa has approached the treatment of the virus.
I was reading this thing the other day about how Jonathan Franzen assimilates societal issues into these very personal family stories. Now, I hadn’t read that while I was writing, but I suppose I tried to do a similar thing.

I set the novel just before the announcement was made that ARVs would be provided to the public in 2003 – a turning point in South African history. I thought it would be interesting to explore a character who sold his ARVs before that time; someone who decided to sell something of his that could heal people, instead of using them to take care of himself.

It’s not quite a selfless thing to do, because he does gain from selling them – but you do present him sympathetically.
He tries to be selfless, and to take up the least amount of space in society that he can. He becomes suspicious of his own desires – and he’d rather have no desires, because of the guilt he feels as a result of his brother dying.

Lindanathi’s brother dies during an initiation ceremony, which sparks a great deal of soul-searching on his part. That said, you seem to take an almost ambivalent view on initiation in the book.
Part of what I wanted to do in the novel is to complicate the idea of masculinity. Part of that is about how Lindanathi’s brother, Luthando, does not feel accepted in his community while he is alive, and how that eventually leads to his death.

There are a lot of conflicting opinions at the moment about initiation. But I went through it myself, and one of the most amazing things about it is that, when you come back from it, there’s a celebration for you – no matter who you are. Once it’s done, you’re accepted wholeheartedly into the community. After being exiled from his community – and from himself for so long – I thought that initiation would have been a good thing for Lindanathi to eventually go through.

I like how you say it would be a good thing for him to go through. It sounds like you care for him.
Is this the autobiographical question?

Part of that seems to be an occupation with wanting to bridge different settings and cultures in your work; to create characters who can sympathise and navigate different cultural planes. Those kinds of sympathies are perhaps absent in much of the canon of South African writing. If you look at a 1980s Coetzee – say, Age of Iron – or even K Sello Duiker’s Thirteen Cents – these books are defined by people not being able to negotiate these different spaces.
Sure. For example, right now I’m working on a reimagining of the myth of Joan of Arc, but set within the townships of Cape Town, focusing on an older character who is a traditional healer.

Writing these kinds of stories helps to take away from the thinking that South Africa is this daunting, unknowable society; that kind of thinking almost leaves our country as somewhat incidental. I’m not comfortable with that. I want to take a different position: to give South Africa its own kind of subjectivity.