You’re from Kenya. Got Ebola? 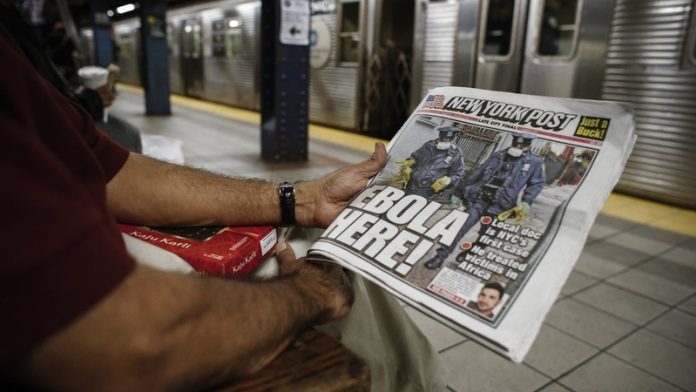 Ebola. The flashy new car that prejudice rides around in. The best way to frame the words “you are different; I do not like you” has become “you could have Ebola”. Nothing better than a dose of mass hysteria to really tell you who your friends are.

The world has gone Ebola mad, with many in the West convinced that anyone with a tan from out of their local area has the disease.

A restaurant in Minnesota in the United States that specialises in African cuisine took Liberian food off its menu because people might fear it was Ebola-tainted. In another case, a teacher was forced to resign after taking a trip to Kenya – where there have been no documented cases of Ebola. Two Rwandan children were denied access to their school in the US, despite the fact there have been no Ebola cases in that country.

A Russian official even went so far as to say that Apple chief executive Tim Cook had Ebola after he came out as gay.

Countries are locking their borders and visas for people from “Ebola countries” are being denied. Africans are being checked in ways that used to be reserved for terrorists, and it is no longer so hot to have a Nollywoodesque accent.

No one is safe from the Ebola prejudice. Trips to South Africa have been cancelled, despite the fact that the affected countries are nowhere near the Kruger Park. Tourists seem to believe that taking in the sights could mean taking in some Ebola as well.

There is increasingly the sense in Western countries that everyone from “over there” has Ebola. Western hysteria is so bad that a frustrated British chemist set up @EbolaPhone, which tweets information about Ebola, and created a map of countries affected by Ebola.

But rejecting outsiders on the basis of Ebola is not just a Western thing. It’s all over South Africa as well.

Happening to be someone who does not look South African, I am waiting for the full-blown accusation that I have Ebola. I recently contracted summer flu and thus had the delightful experience of coughing and sniffling on South African public transport – while looking very much East African. This drew more than the odd whisper and sideways look.

Ignorance is the root of prejudice, and so it is with Ebola. One of the big problems is the dearth of proper information.

The information on TV is only that Ebola is “spreading through communities”. Public service announcements can be helpful, but the underlying message coming through is that Ebola is spreading rapidly across Africa.

We are not being told that the areas of West Africa where Ebola is most rife are managing, largely, to contain it within a limited area.

Africa is a continent of 30 221 532km² and the regions that are affected by Ebola add up to 428 967km². Yet, despite this, people seem convinced they are about to meet someone with Ebola in their local coffee shop. Seeds of xenophobia have long been sown – the first crop was arguably the xenophobic attacks of 2007 – and are growing well in South Africa. This xenophobia seems to have become embedded, even in formal structures.

The existence of Ebola has not helped the lives of foreigners living in South Africa. Truth be told, it was hard enough here without people thinking that, just because I look exotic, I’ve got Ebola.

Kagure Mugo is the co-founder and full-time curator of HOLAAfrica!