Of Italy’s first female astronaut … and a coffee machine 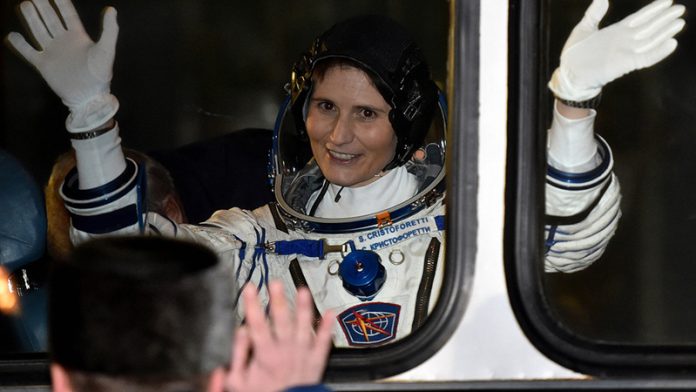 Samantha Cristoforetti, along with Russian cosmonaut Anton Shkaplerov and American astronaut Terry Virts, arrived at the orbiting space lab on the Soyuz TMA-15M spacecraft at 2.49am GMT on Monday, Nasa said.

“A new vehicle has arrived. The Soyuz is confirmed as attached properly,” Nasa television added.

Cristoforetti, Virts and Shkaplerov docked just under six hours after taking off from Russia’s Baikonur Cosmodrome in Kazakhstan. They are to stay at the space station until May 2015.

Their voyage will mean major food upgrades for the astronauts aboard, with nearly a kilogram of caviar in their baggage and an espresso machine.

“There will be 15 boxes of 30 grams each of caviar, but also apples, oranges, tomatoes and 140 doses of freeze dried milk and black tea without sugar,” a space station official was quoted as saying.

Astronauts on the station will also finally be able to enjoy a decent brew thanks to the 20kg machine, designed by famed Italian coffee makers Lavazza and engineering firm Argotec, which specialises in making space food.

Cristoforetti (37), who is also a captain in the Italian air force, “will be not only the first female astronaut from Italy to go into space, but also the very first astronaut in the history of the conquest of space to savour an authentic Italian espresso in orbit”, the two companies said in a statement.

In total, 16 countries work on the ISS, including Russia and the United States, which finances most of its operation. A team of astronauts is always aboard with stays of up to six months.

Launched into orbit in 1998, this outpost and orbiting laboratory, which cost $500-billion to build, saw its lifespan extended by another four years by Nasa. It’s now expected to remain in service until 2024.

The space agency depends entirely on Russia to send its astronauts to the ISS, which costs the US $70 million per person in Soyuz rockets. – AFP