Hofmeyr: Blacks were ‘not offended’ by apartheid tweet, court hears 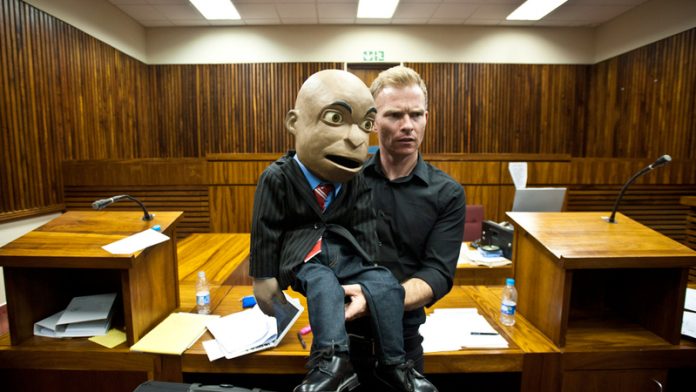 Afrikaans singer Steve Hofmeyr’s tweet – that black people were the architects of apartheid – did not offend blacks, the Randburg Magistrate’s Court heard on Thursday.

“In my published column, I am saying that the so-called apartheid tweet by Steve did not offend black people … It offended white liberals,” Daniel Roodt, representing Hofmeyr, told the court.

He read an excerpt from a column he wrote, and published in Afrikaans, translating it to English for the court.

The court also heard that comedian Conrad Koch, and his puppet Chester Missing, defamed Hofmeyr on social media. “The respondent [Missing and Koch] is attacking and defaming Steve as a person … and Steve is a member of the minority which is suffering extreme violence in this country,” said Roodt.

Roodt, who is not a lawyer, brought an application for an interdict on behalf of Hofmeyr.

On November 10, Hofmeyr secured a court order against Koch, known through his puppet Chester Missing, to prevent him from harassing the singer on Twitter.

The order prevents Koch and his puppet from threatening, harassing, or making defamatory statements against Hofmeyr.

Koch, represented by advocate Steven Budlender, is challenging the interim court order against him.

Roodt said the tweet was open to interpretation and it was difficult to explain the tweet further.

” … but Mr Hofmeyr explained it in less than 140 characters,” said Sewnarain. Roodt said Hofmeyr said “… go figure” at the end of the tweet.

He said Hofmeyr also contested that apartheid was a crime against humanity before 1994. “Hofmeyr contends that everyone who participated in the pre-1994 South Africa, through homelands and so on, is jointly responsible for apartheid, regardless of colour.”

Roodt argued that a permanent order should be made against Missing. “If not granted, there will be an outrage against Hofmeyr everywhere he goes because of the respondent’s conduct on social media and everywhere else,” Roodt said.

Budlender was expected to present his arguments against making the interim order permanent.

Missing not MIA in court
Koch arrived at court with Chester Missing in tow, lightening the mood.

“Why are we here?” Missing asked Koch, as photographers and television cameras focused on him. “We are here because you say things on Twitter,” Koch said to Missing.

Dressed in a striped suit and red and white tie, Missing looked at journalists, and then turned to Koch.

“We need to consult … where is our lawyer Dario [Milo]? Our lawyer’s name sounds like a drink! Who gets represented by a hot chocolate?” said the puppet, rousing giggles among journalists and onlookers.

Missing was brought into the courtroom followed by cameras.

“What a lot of wood …” he said as he looked around at the courtroom decor.

Judge bans tweeting
Earlier on in the day, Sewnarain prohibited tweeting and live broadcasts from inside court.

He made this ruling in response to a media application to broadcast proceedings between Koch and Hofmeyr, according to a Sapa reporter filing from outside the court.

Koch had also penned a column published by The Times titled “Dear white supremacists … ” and asked why sponsors associated with Hofmeyr, such as Land Rover and Pick n Pay, were still sponsoring him.

Hofmeyr secured the interim order during a Twitter war on the subject. The order prevents Koch from threatening, harassing, or making defamatory statements against him.

He was also not allowed to tag him on social media websites like Twitter or mention him in television and radio interviews.

Hofmeyr said that until Koch explained the “hate speech” in court on Thursday, the ventriloquist was not allowed to contact him, his sponsors or his business partners directly or indirectly, said Beeld newspaper.

Hofmeyr recently had a sponsored bakkie withdrawn by Williams Hunt in Port Elizabeth after the tweet. – Sapa, Staff reporter