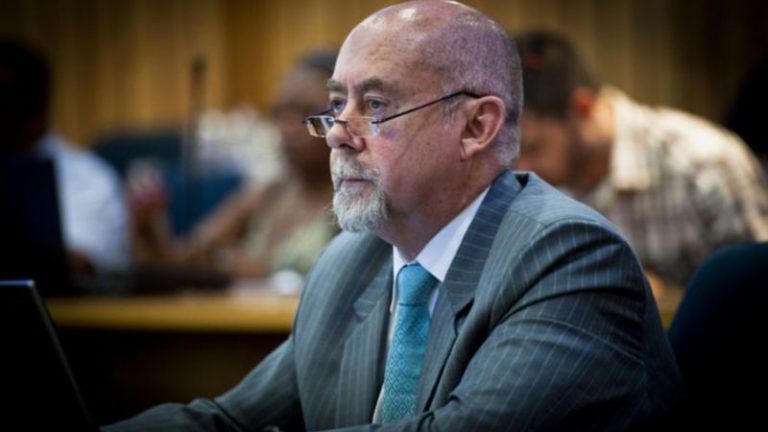 The standoff between Wouter Basson’s lawyer, Jaap Cilliers, and Mark Heywood from the activist organisation Section27, continued on the second day of his Health Professions Council of South Africa (HPCSA) sentencing hearing in Pretoria.

The HPCSA found Basson, a cardiologist, guilty on several counts of unprofessional conduct in December last year. The activities that led to him being found guilty include the mass production of mandrax, ecstasy and the weaponising of teargas. These relate to the period during which Basson headed the apartheid government’s chemical and biological warfare programme, Project Coast, in the 1980s and early 1990s.

Dubbed Dr Death by the media, Basson was absent from Thursday’s proceedings as one of his patients from his private practice in Durbanville, north of Cape Town, had a medical emergency last night.

In his testimony on Wednesday, Heywood presented two petitions signed by medical practitioners and civil society organisations calling for Basson to be struck off the HPCSA roll.

Cilliers was dismissive of Heywood and called into question Heywood’s qualifications to present the petitions. He highlighted a number of errors in one of the petitions.

“It’s amazing that a person like you, working for six to seven months on this comes and testifies under oath that you have 230 doctors who signed the petition. And then within a couple of minutes we saw that you have some duplications and triplications,” he said.

He further accused Heywood of misleading the committee on the number of doctors who had signed the petition.

Basson cannot go unpunished
The second witness called by the proforma complainant, that represents the doctors who originally laid a complaint against Basson, was Marjorie Jobson from the Khulumani Support Group. She presented two petitions signed by individual members of her organisation and other social justice organisations, that also called for Basson’s removal from the register of medical practitioners.

“It is about setting the standard for the medical profession in South Africa and creating a precedent that will inform all future doctors to think before they agree to participate in activities such as Dr Basson participated in,” she argued.

Jobson, who has worked extensively with “victims of apartheid atrocities and their families”, said that Basson’s actions cannot go unpunished.

“I do not believe that he has to date taken responsibility for the choices he made. He made the choice to believe that he was covered ethically because he was acting under the instruction his superiors,” she said.