Writers can give hope to a society living in fear 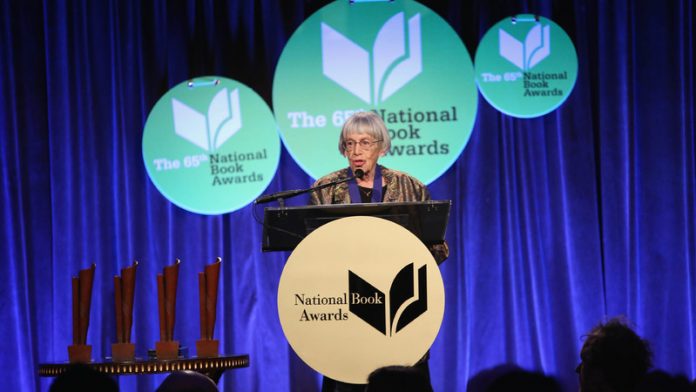 The celebrated novelist Ursula le Guin has chosen to share her award for distinguished contribution to American letters with her fellow science fiction and fantasy authors, describing them as “the writers who were excluded from literature for so long … who for the last 50 years watched the beautiful rewards go to the so-called realists”.

Le Guin, introduced by Neil Gaiman as an author who “made me a better writer and, much more importantly, made me a better person who wrote”, used her speech to slam publishers, including her own, and Amazon.

“The profit motive often is in conflict with the aims of art. We live in capitalism,” she said.

“Its power seems inescapable. So did the divine right of kings. Any human power can be resisted and changed by human beings. Resistance and change often begin in art, and very often in our art – the art of words.”

She urged audiences to bear in mind that books are “not just commodities”.

The author is known for her classic children’s fantasies set in the world of Earthsea as well as science fiction novels The Left Hand of Darkness and The Lathe of Heaven.

She predicted that “hard times are coming when we will be wanting the voices of writers who can see alternatives to how we live now and can see through our fear-stricken society and its obsessive technologies to other ways of being, and even imagine some real grounds for hope”.

Le Guin (85), who was being honoured by the National Book Foundation, was applauded when she said we need “writers who know the difference between the production of a market commodity and the practice of an art”, and writing merely to “suit sales strategies in order to maximise corporate profit and advertising revenue is not quite the same thing as responsible book publishing or authorship”.

She said editorial departments cede control to sales departments. “I see my own publishers in a silly panic of ignorance and greed, charging public libraries for an e-book six or seven times more than they charge customers.”

A signatory to the Authors United letter calling on Amazon to end its recently resolved feud with the publisher Hachette, Le Guin made oblique reference to that battle.

She told her audience that “we just saw a profiteer trying to punish a publisher for disobedience and writers threatened by corporate fatwa, and I see a lot of us, the producers who write the books, and make the books, accepting this”.

As the American literary elite celebrated her career, the National Book Foundation said she “has defied conventions of narrative, language, character and genre, as well as transcended the boundaries between fantasy and realism, to forge new paths for literary fiction”.

Le Guin told the audience that, as she stands, “at the end of it, I really don’t want to watch American literature get sold down the river”.

“We who live by writing and publishing want – and should demand – our fair share of the proceeds. The name of our beautiful reward is not profit. Its name is freedom.” – © Guardian News & Media Ltd, 2014