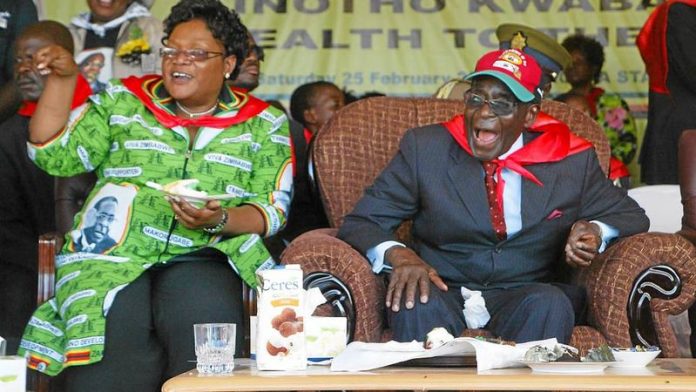 Zanu-PF has carried out the largest and most shocking purge in its history with senior ministers suspected of supporting vice-president Joice Mujuru losing their top party positions.

Mujuru’s failure to make it into the ruling Zanu-PF’s central committee, along with her key allies who have held influential posts in party and government, leaves her political career hanging by a thread ahead of the party’s congress which takes place from December 2 to 9 2014.

Also, crucially, it means Mujuru and her allies will not sit in the central committee meeting, which will discuss Zanu-PF’s proposed constitutional amendments aimed at giving Mugabe power to appoint his deputies and national chairperson. The central committee will sit during congress.

The amendments were pushed through by Mujuru’s rival faction led by Justice Minister Emmerson Mnangagwa, which has the support of first lady Grace Mugabe.

Previously, vice-presidents and the national chairperson were elected upon nomination by at least six provinces. Given the centrality of the politburo and central committee in decision-making, Mujuru’s failure to access or control the bodies may well mean that her presidential ambitions are over.

Assassination allegations
Mujuru failed to make it to both bodies after her CV was rejected by her home province Mashonaland’s central provincial executive council which met at the weekend in Bindura. The council rejected Mujuru on the grounds that she has been implicated in leading a faction suspected to be plotting Mugabe’s assassination.

Acting Mashonaland Central Party provincial chairperson Wonder Mashange, was on Wednesday quoted in the state media as saying that “the province did not want to be associated with anyone plotting to kill the party’s first secretary [Mugabe]”.

Ironically, Mutasa is presidential affairs minister overseeing the intelligence portfolio and is in charge of Mugabe’s security affairs.

Two other ministers – Webster Shamu, a minister of telecommunications and Sylvester Nguni, a minister of State in Mujuru’s office – have also fallen by the wayside.

The cocktail of charges against Mujuru and her allies range from plotting Mugabe’s demise to fanning factionalism to the curious allegation of “being aloof” from party activities. The charges are yet to be proven or brought to court but the allegations were enough to seal their fate at party level.

Hope lies with Mugabe
Mujuru’s only hope now lies with President Robert Mugabe, who is empowered by the Zanu-PF constitution to nominate ten persons of his choice to the central committee.

The central committee whose membership has recently been increased through recent amendments to 300 from 245 is the principal organ of and acts on behalf of congress when it is not in session.

It has powers to make rules to govern the conduct of the party and its members. It is also charged with the implementation of all decisions of the congress.

Also significantly, the central committee can amend the Zanu-PF constitution, subject to ratification by Congress, as it is expected to do next week, possibly sealing Mujuru’s fate in the process.

Zimbabwean political scientist and University of the Western Cape professor Brian Raftopolous said the fall of Mujuru and her allies is the most ruthless purge in Zanu-PF since independence in 1980.

By contrast, Mnangagwa allies are basking in the sun after the majority of them retained their posts while others also made it after having been out in the cold. Information Minister Jonathan Moyo sailed through as did Finance Minister Patrick Chinamasa, Oppah Muchinguri, Monica Mutsvangwa, Transport Minister Obert Mpofu and Speaker of Parliament Jacob Mudenda, among others.

Raftopolous said the fall of Mujuru did not necessarily translate to a Mnangagwa ascendancy nor does this necessary mean that Mujuru and her allies’ careers are over.

“I have never seen anything like it [the purge] before but given the vagaries of Zanu-PF politics, this cannot be said to be the end of Mujuru. It looks likely that she will not land the presidency or any of the high positions but that does not necessarily mean that Emmerson Mnangagwa has won because Robert Mugabe is full of surprises,” Raftopolous told the Mail & Guardian on Wednesday.

“Mugabe operates by demoting people, punishing them but keeping them within reach so that he can bring them back some other time. So this does not mean the end of Mujuru and she could bounce back at some other time.”