Nelson Mandela ‘lives on my skin’ 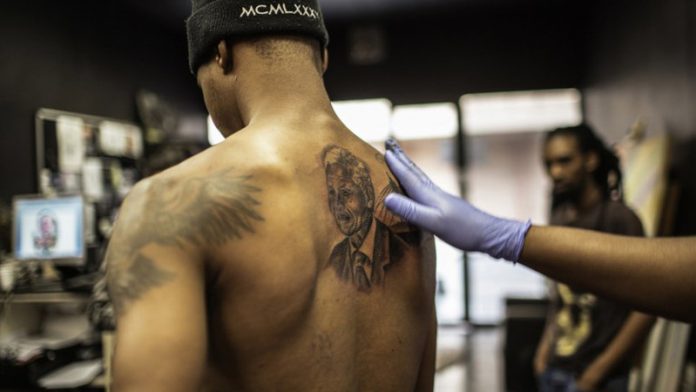 Mpumelelo Masinga takes a deep drag from his cigarette, his hand trembling with apprehension.

Masinga is preparing to spend three hours at Black and White Tattoo Studio in Johannesburg getting Nelson Mandela’s face tattooed on the centre of his back.

“I’m very, very nervous,” he explains with a sheepish smile. “It’s a big piece and I’m starting on a new canvas, my back.”

A year ago when Mandela died, Masinga decided he would pay tribute by getting a tattoo of the anti-apartheid hero.

“It’s art and a memory that stays with me forever,” said the sinewy 27-year-old, who wore Nike trainers and a black beanie embroidered with the word “DOPE” in capital letters. “One day I’ll explain it to my kids.”

He isn’t the only one getting inked for Mandela.

As South Africa prepares to commemorate the first anniversary of the statesman’s death on December 5, tattoo studios in the country are reporting an ever-growing demand for Mandela-inspired tattoos.

From Johannesburg to Cape Town, portraits of Mandela and famous quotes from the great man – most of them lifted from his best-selling autobiography, Long Walk to Freedom – are in demand.

“It’s not something that just happened overnight, it slowly but surely got popular.”

Nadia Smith, an assistant at Jaded Ink, another studio in Johannesburg, said the big fashion is for clients to request an “abstract, graffiti-style” tattoo of Mandela.

“The graffiti one is a little bit more rustic,” said Smith, who estimates her studio has done more than five tattoos of Mandela since his death.

Those with a Mandela marking use it as a reminder to follow his example of forgiveness.

‘Forgive and move forward’
Leeshan Ramasamy said his tattoo, a portrait of Mandela in a suit with his trademark benevolent smile, could not be better.

“It’s a real ice breaker,” said Ramasamy, a gregarious, 42-year-old businessman from Johannesburg, who fought against the apartheid regime as a student.

Leesha Ramasamy (42) gets his tattoo of Nelson Mandela on his arm.

“The most important lesson he has given me is you have to forgive to move forward.”  Ramasamy believes that by tattooing the human rights icon on his body he is immortalising Mandela.

“You grow old and he is still there,” he said, taking a long look at his tattoo. “I can carry him around and give him life, basically he’s still living on my skin.”

In a testament to the former president’s power to transcend race, blacks and whites alike are lining up to go under the needle.

Back at the tattoo studio, Masinga was joined by his friend Marcel Bosthumus, a 21-year-old Afrikaner from Randfontein, a mining town about 40 minutes west of Johannesburg by car.

Bosthumus chose a portrait in the style of an oil painting on his leg, with Mandela wearing one of his colourful shirts.

Marcel Bosthumus (21) gets his tattoo of Nelson Mandela on his leg.

“I’ve always been a fan of him,” said Bosthumus. “He went through a hard time, and after going through that hard time he kept going.”

Three gruelling hours later, each man has Mandela tattooed into his skin.

Masinga looks over his shoulder at his back in a full-length mirror, rubbing his goatee as he appraises the work.

Then he gives his tattoo artist a high-five. “It’s exactly the way I wanted it,” he says. “It was worth it.” – AFP