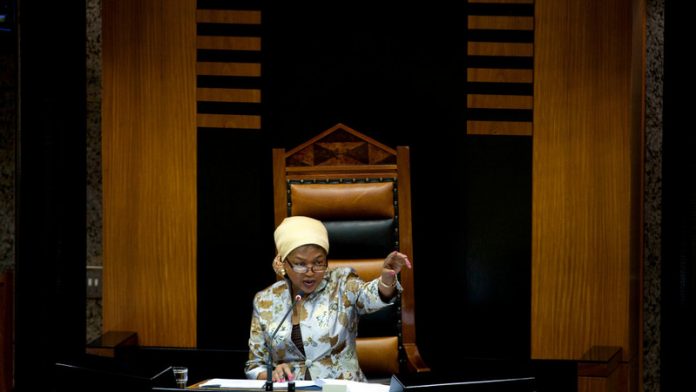 When Baleka Mbete (65), the speaker of the National Assembly, unsuccessfully attempted to silence Economic Freedom Fighters (EFF) MP Floyd Shivambu last month, she resorted to playing the culture card. But to Mbete’s chagrin it did not work.

The verbal skirmish started when Shivambu, 34 years Mbete’s junior, referred to the speaker by her first name after revealing the EFF’s plans to disrupt the State of the Nation address if President Jacob Zuma did not come to answer questions from the House before Parliament went into recess.

“Angiyona intanga yakho [I am not your peer], Floyd,” Mbete said, with her finger pointed schoolmarmishly at him. “You are an African child, brought up by people I respect. And I’m quite sure you’re not reflecting the way they brought you up.”

The EFF MP was not intimidated.

Not the first time
It was not the first time Shivambu had fallen foul of the speaker. He was ejected alongside EFF MPs on August 21, after they chanted “pay back the money” at the president, who was attempting to answer questions. On September 17, while Deputy President Cyril Ramaphosa was answering questions, Shivambu called him a murderer before giving him the middle finger when asked to leave by the speaker for refusing to withdraw his remarks.

In a blog post following the incident, Shivambu called the reactions “mainly sentimental” and “based on the fact that he [Ramaphosa] is older and, to state it clearly, I have no respect for politicians who use age to analyse any development”.

There appears to be a collective need to acknowledge and understand the nature of that change.

Columnist and social commentator Nomalanga Mkhize says: “I’m not really surprised at the speaker, given the combative nature of Floyd’s engagement with her. But when political discourse happens between black people in South Africa, it is in a completely different language to what the DA [Democratic Alliance] would use in Parliament. The DA is a white party, and the language it has used thus far had no sting.

“What the Baleka and Floyd confrontation does is shift the etiquette into the arena of black social linguistics. It’s like Julius [Malema] referring to Lindiwe Zulu as a ‘straatmeid [street maid]’. Lindiwe was walking up and down saying: ‘Sizonishaya [We will hit you]’, but at the same time there were people in the corridors shouting ‘Nizinkunkuma [You are garbage]’.

‘White gaze’
“When the white gaze is gone, in our unguarded selves – when there’s a heated exchange between two black South Africans – we draw on that language we use in that unofficial space. The thing with Malema is that he talks in the same tone, whether there are white people in the room or not. He brings the same ukudelela [irreverence] through.”

Zuma has not appeared in Parliament since being heckled by EFF MPs on that day in August. The ANC executive has been framing the climate of Parliament as one of “disrespect” for the president. On November 5 Ramaphosa blamed the opposition parties for making it impossible for Zuma to come to Parliament. His supporters outside official party structures have also echoed this position.

On November 30 in Durban, Caesar Nongqunga, the Twelve Apostles Church in Christ president, called EFF MPs rude, saying: “If you allowed disrespect in Parliament, you will destroy the country – respect yourself and elders.”

EFF MP Floyd Shivambu says relationships in Parliament are professional and not ones of parent and child. (David Harrison, M&G)

Trevor Ngwane, a former ANC councillor and now an academic, says the current reliance on the culture card stems from the thread of patriarchy running through to the movement’s foundations.

“The ANC has a background of chiefs. Nelson Mandela was a chief himself, so it was a leadership-centred organisation,” he says.

“Oliver Tambo made it like that in exile because of the difficulties of keeping things together. Tambo and Mandela were Xhosa patriarchs, even though they adopted modernity. Zuma himself is a Zulu patriarch. There is also the traumatising experience of life in exile, let alone the pressures of military life. There were differences between the people who went to exile and us on the inside.”

‘Us and them’
Ngwane says when exiled ANC leaders returned there was often an “us and them” chasm. “Theirs was a culture marked by military discipline whereas we were more open and more democratic. Theirs was to impose along the lines of: ‘You can’t go against your leader.'”

People who have been involved in the ANC’s Youth League structures say that the parliamentary interactions between Mbete and Shivambu should not be viewed as part of a wider culture within the ANC, but within the context of circumstances that led to the formation of the EFF.

“It’s clear, at least to me, that she does not like the EFF,” said a youth league member. “If you watch some of those parliamentary sessions, she takes a harder line on the EFF members and yet is concessionary to other MPs.

“On the other hand, they [EFF MPs] overcompensate for that.”

Political commentator Max du Preez disagrees, saying the ANC is increasingly using culture as a crutch as it falls out of step with broad cultural developments in South Africa. “It has always been there – for example, in the way that Zuma used a Zulu term for ‘young lady’ when addressing Lindiwe Mazibuko in Parliament.

“Ethnicity and colour are irrelevant in Parliament but the ANC uses them on other parties too. Every time someone in the DA says something, like Mmusi Maimane, the ANC uses his ethnicity as a weapon [calling him the madam’s garden boy] and it’s wearing quite thin.”

Self-consciousness
Political lecturer Anthony Butler says the recent events in Parliament point to a self-consciousness among EFF members – especially those from the youth league – of the role the youth played in unseating the ANC’s status quo.

“Tambo, Mandela and [Walter] Sisulu staged a coup in 1949 [as the Congress Youth League]. They pushed out [ANC leader Alfred] Xulu and put in JS Moroka and Sisulu in the secretary general’s office. The ANC was a historically conservative organisation from its founding until the 1940s when the youth started asserting themselves. Another important turning point that had nothing to do with the ANC was, of course, the 1976 uprisings,” Butler says.

Parliament with the EFF also seems to be a reflection of where South Africa is going: less guarded, more robust, with different rules and with an evolving culture – a culture in which the culture card won’t trump opposing views so easily.