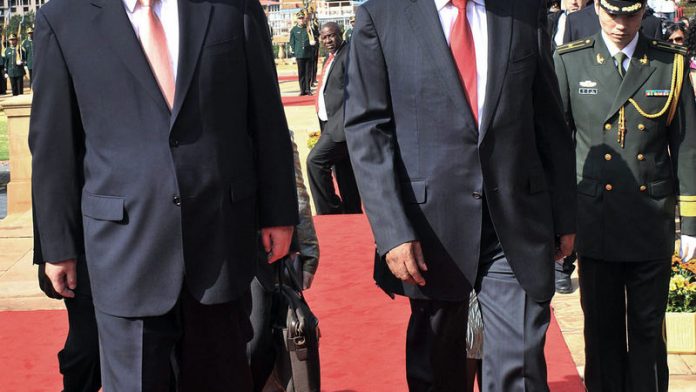 South African President Jacob Zuma said on Friday that China’s growing influence in Africa would allow the continent to free itself from “colonial shackles” as he wound up a visit to Beijing.

Zuma’s government has denied the Tibetan spiritual leader the Dalai Lama several visas in recent years and maintains a strongly pro-China foreign policy, while Beijing has expanded its footprint to become the biggest trading partner of South Africa and the African continent.

“The emergence of China as a power among others gives or offers an opportunity to African countries to be able to free themselves from the shackles that are really colonially designed,” Zuma told an audience of students at Tsinghua University in Beijing.

Zuma, whose party led the struggle against apartheid, added that in African countries’ relations with “Europe in particular, you are regarded as either a former subject or a second and third class kind of a person”. But “the relationship between China and African countries, particularly South Africa, is different”, he said.

“We relate as brothers and sisters to do business together, not because one is a poor cousin.”

‘Good friends’
The ANC leader was in Beijing on an official visit – on the anniversary of Nelson Mandela’s death – during which he has been hailed by China’s President Xi Jinping as a “good friend”.

Chinese demand for raw materials has seen trade with Africa boom, and many in the continent see Beijing as a helpful counterbalance to the West, but the relationship has also stoked fears of neo-colonialism.

Beijing has also come under fire for dealing with regimes with little regard for their human rights records. But – to rapturous applause from his Beijing audience – Zuma said: “If we work together, we in a sense represent a different world than the world that has been dominated by the North.”

Zuma was awarded an honorary professorship at the university, one of China’s most prominent, and added that Chinese sailors may have visited South Africa before European explorers.

“We have people in Cape Town who claim descent from from Chinese 15th century sailors,” he said.

Chinese Admiral Zheng He embarked on a two-year expedition in the 1400s that took his fleet of 300 ships as far as East Africa. Historians do not generally believe that he visited Africa’s southern tip, but Zuma said that “we have to know more” about Zheng, whom he called a “great Chinese navigator”. – AFP