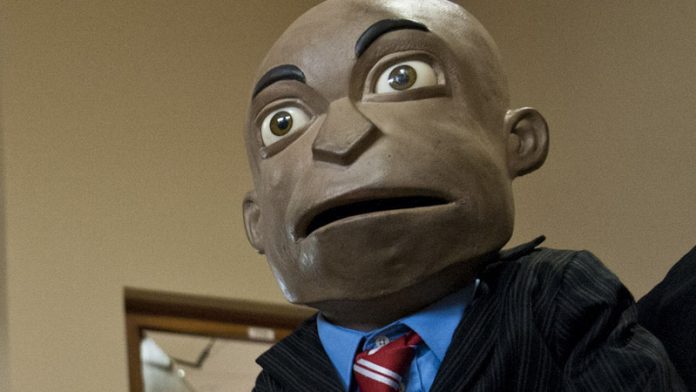 A twar – or Twitter war – has erupted between Chester Missing and Democratic Alliance (DA) leader Helen Zille after she wrote a newsletter titled: Racism is not free speech. It is an offence.

In the newsletter, Zille condemns racism and reflects on the incident where Afrikaans singer Steve Hofmeyr tweeted: “Sorry to offend but in my books Blacks were the architects of Apartheid. Go figure.”

Hofmeyr’s tweet did not sit well with Missing and sparked its own fair share of outrage on the social media network. The puppet called on Hofmeyr’s sponsors to reconsider their association with the singer. A vehicle dealership withdrew its sponsorship, and Hofmeyr lost the use of one of their bakkies.

The musician obtained an interim protection order against the puppet, but last month, the high court in Johannesburg set the order aside. Hofmeyr wanted to stop Missing from harassing him on social media, television or radio.

“Chester knows there is nothing like a running battle with racists to send your career into orbit. Maybe he did a deal with Steve [Hofmeyr] and Dan [Roodt] to share the royalties in perpetuity. Steve and Dan would know that’s what you do when your career needs a booster rocket,” Zille mentioned in the newsletter.

Missing responded to Zille in a series of tweets.The puppet is not pleased with the fact that Zille initially said nothing when he was personally attacked for his stance on racism. According to Missing, Zille should have raised her concerns in the beginning, rather than accuse him of seeking publicity.

Dear @helenzille, I had personal threats to myself & family, had threat of arrest and gone to court, while U said nothing re Steve. Pathetic

Finally . @helenzille when question motives, lets not forget that U have all the reason to sideline me & my questions re your liberal racism.

Missing reminded Zille and Mmusi Maimane that he once asked
them to respond to Hofmeyr’s racist tweets and they decided to keep quiet instead of responding.

In fact I tweeted u at the time, where I would have been more than willing to step back and let u take over. U didn’t pic.twitter.com/57qqfiwJyh

I asked u to act a month ago. U ignored until safe. ” @helenzille: Racism is not free speech. http://t.co/NIzWGHmqBS #SAtoday #SayNoToRacism

It’s also odd @helenzille that you never asked about sponsors of racists in your piece, which is where u have power. Funny that.

Zille then responded, accusing Missing of making the newsletter all about him. In her series of tweets to the puppet, Zille says Missing is, eh, missing the point of the newsletter.

Can someone please explain how @chestermissing managed to make this newsletter about himself? Who has lost it here? http://t.co/6gZhnUQ6JB

@chestermissing You’re in the wrong orifice again. I have always said apartheid was a crime, and was fighting it before you were born.

Missing responded highlighting his thoughts on Zille’s stance in the newsletter [Insert link of newsletter].

@helenzille I respect u for that, however quoting inaccurate stats mean u ARE saying it wasn’t so bad, which confirms structural racism, etc

Missing says despite what has happened between him and the DA leader, he is glad that Zille said something about racism – but reaffirmed that Zille’s words made it seem like she fuelled Hofmeyr’s cause. “This is exactly what Steve needs her to say. It also is severely frustrating because he is gunning to bring me down now, so she’s helping him, although I am really glad she at least said something about racism.”