DA: ANC has reduced Parliament to an absolute joke 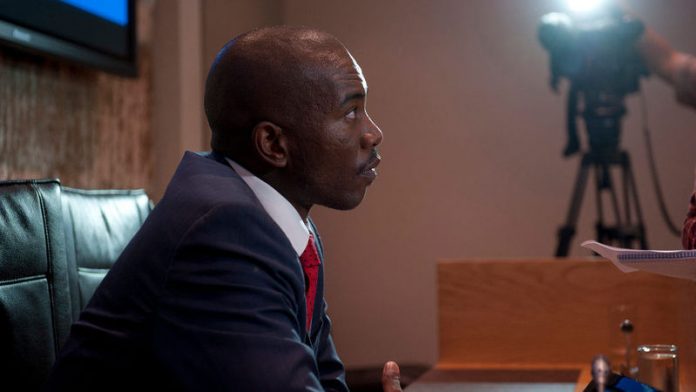 Luthuli House has captured Parliament and is using it to protect and defend President Jacob Zuma. This is according to the Democratic Alliance (DA) parliamentary leader Mmusi Maimane and deputy chief whip Mike Waters, who said that the ANC wanted Parliament to “become an extension of Luthuli House”.

Speaking at a media briefing in Johannesburg on Monday, Maimane and Waters pointed to the use of riot police as another example of how the ANC has abused its powers of the majority. They said the use of the police was an attempt to “intimidate” and “silence” opposition MPs.

“We are worried that riot police are used as direct intimidation of MPs. We cannot express ourselves without the riot police coming through the door to silence us.”

“The intimidation tactics will not work,” said Waters.

Maimane said the incident was a disgrace and the opposition parties were still trying to ascertain who gave the order for the riot police to enter the chamber.

The two MPs said there was a crisis in the ANC of ignoring institutionalism and constitutionalism in Parliament, and that the ANC’s behaviour was more groupthink.

“ANC MPs do not think independently. The ANC has reduced Parliament to an absolute joke.”

‘Undemocratisation’
Maimane said what many may have labelled a “decorum crisis in Parliament” was actually the opposition party members fighting against the ANC’s behaviour.

He said the DA was preparing itself for the next part of the battle, the battle against the “undemocratisation” of Parliament.

“The ANC uses its majority to capture Parliament for the blatant use, protection and defence of [President] Zuma,” he said.

He added: “Baleka Mbete [speaker of the National Assembly] cannot continue as speaker; she is the national chairperson of [the] ANC. She is in the top six. She has been deployed to extend power to Parliament. We will make sure she is removed,” said Maimane.

Maimane used Nkandla and the Economic Freedom Fighters (EFF) MPs’ suspension to show the decline of tolerance for the opposition parties by the ANC parliamentary members.

“When you set up a powers and privileges committee, don’t abuse it. Don’t come to a conclusion before listening [to all sides],” he said.

“Key evidence was ignored, the leader of EFF submissions were not even considered,” he said, trying to explain the degeneration of Parliament.

On Nkandla, Maimane said the ANC’s disregard for the public protector’s recommendation and their insistence of taking the report to Parliament was a “whitewash”.

“We cannot be able to sit in an ad hoc committee that sat to absolve the president from answering questions. The report became co-opted to the prose by the ANC that the president didn’t know anything,” he said.

‘People don’t elect Imbizos’
The biggest point of contention was Zuma’s refusal to appear in front of Parliament. Maimane said the ANC and Mbete have acted “undemocratically” by not allowing Zuma to appear in Parliament in order to answer questions relating to Nkandla, the energy crisis, the downgrading of South African parastatals and the mystery around the Russian nuclear deal.

“When the opposition parties call the president to Parliament, they [the ANC] say the environment in Parliament is not conducive,” said Maimane.

He added, “The idea that the president must have a conducive climate is ridiculous. We get given excuses from pillar to post. The president refuses to respect the role of Parliament,” said Maimane.

He told the press that the ANC has decided that Zuma should rather account to an Imbizo, and not Parliament, to all questions that have been raised.

“In what world?” asked Maimane. “The president must account to Parliament. The people of this country don’t elect Imbizos, they elect MPs.”

He said the ANC was developing a culture of providing vague and evasive answers, making it impossible to hold any ministers to account.

“The ANC has reduced Parliament to an absolute joke.”