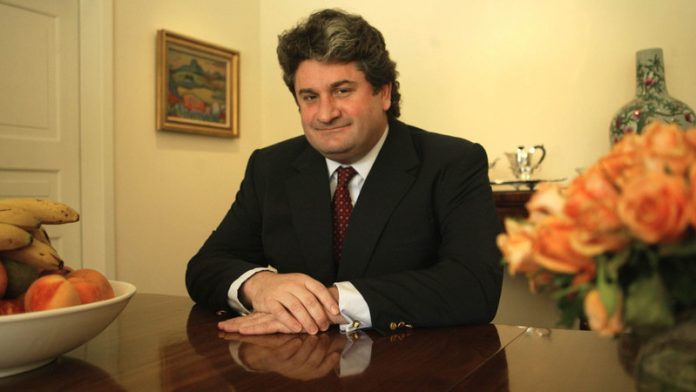 Eight years and hundreds of thousands of rands in legal costs later, the ANC plans to lay to rest its version of the ghost of mining magnate Brett Kebble.

But thanks to the way the party goes about its business, it will do so at a steep discount. In the years immediately before his death, Kebble donated at least R10.8-million – and perhaps as much as R22.2-million – to the ANC and its youth league – most of it the proceeds of fraud and theft.

That does not include the cost of cars and houses bought for the use of ANC members.

The ANC hopes to settle the claims against it for a total of R1.7-million, or about 16% of the amount it has acknowledged receiving from Kebble.

The party’s plan to settle with the liquidators of the Kebble estate, after fighting for years to prevent any recovery of money at all, was revealed by ANC treasurer general Zweli Mkhize while presenting his financial report at an ANC national executive committee (NEC) meeting last month.

“There are still two outstanding Kebble court cases that are due to go on trial next year. The lawyers have advised that these matters [should] be settled,” he said.

Giving in
An NEC member told the Mail & Guardian that the party is now giving in because, “as the case develops, you start knowing more truths and you realise you’re not going to win that case. So it’s better to settle.”

One of those truths, perhaps, is that a settlement will spare the party, and some prominent officials, the enormous embarrassment that is sure to unfold in open court.

Documents already available to the public through various courts show that the ANC had a considerable appetite for Kebble’s money and was apparently unconcerned that the funds flowed to the party in ways that should have raised concerns about money laundering.

A defence in open court could also bring to public notice the involvement of individuals who acted as conduits of Kebble money to the ANC, such as the now prominent Iqbal Survé, proprietor of Independent Newspapers (see “The men who moved the money”.)

In addition, thanks to a quirk of liquidation law, any defence mounted by the ANC would be highly unlikely to succeed unless the party argued that Kebble received benefit in return for his donations, such as access to political decision-makers that would ultimately profit his companies.

A settlement, on the other hand, would lay the matter to rest for a relatively paltry amount. It would also potentially create a precedent that could see the ANC and other political parties being held liable for repaying direct donations made by individuals subsequently found to have been insolvent at the time.

Indirect donations
However, court papers show that the ANC prefers indirect donations, which is also the reason for the gap between the planned R1.7-million settlement offer and the at least R10.8-million in benefits the party received from Kebble.

“We have got the budget,” Fikile Mbalula, then president of the youth league and now minister of sport and recreation, explained to an insolvency inquiry into Kebble’s affairs in 2006, in a transcript that has since become part of the court record.

“In terms of that budget, we give it to the fundraising person whom we are fundraising from and we actually explain which are people that need to be paid and how much.”

The ANC, like all major political parties in South Africa, is notoriously secretive about how it funds its activities and is under no legal obligation to disclose anything about its sources of income. But thanks to the efforts of liquidators to reclaim whatever they can of the money Kebble stole from shareholders in his companies – and the ANC’s determination to date not to repay the direct donations it received – the accumulated record provides an outline of the methods employed.

Those methods spell trouble for any efforts to regulate the funding of political parties, if such regulation is ordered. In its first hearing of 2015, the Constitutional Court is due to hear an application by the My Vote Counts campaign for a declaration that Parliament has failed in its duty by not legislating on party-political funding.

Sympathetic donors
Mbalula and other party officials described how provincial ANC offices and the youth league would plan for major events (such as a national conference) or encounter a serious cash crunch (such as when the Western Cape ANC offices faced having essential services cut off for nonpayment), and would approach someone known to be sympathetic to their cause – such as Kebble.

That person would then be given a schedule of payments that had to be made, ranging from small cash amounts to T-shirt suppliers right through to multimillion-rand block bookings of hotel rooms. The donor would make those payments directly, with the money never passing through ANC accounts and, theoretically, being invisible to anything except determined forensic analysis.

In Kebble’s case, to complicate matters further, even direct payments to the party were sometimes deliberately hidden. In 2006, Kebble protégé Lunga Ncwana told an inquiry how Kebble would pay money to him to be passed on to the ANC. “He said that he did not want to be seen as getting political favours, paying the money directly as JCI,” Ncwana said, referring to one of Kebble’s companies.

By his own admission Ncwana, then considered highly influential in the youth league, especially in the Western Cape, was given the use of six cars by Kebble, including a Maserati and a Porsche Cayenne.

Kebble employed a number of fronts to receive and launder money, and then pay it to recipients including the ANC. Thanks to those fronts and poor record-keeping by the ruling party and intermediaries, it is unclear exactly how much the ANC received in cash and benefits. Forensic auditors believe the number may be as high as R22.2-million, but the numbers officially acknowledged by the party are less than half that.

Borrowed money
Using the Companies Act and the Insolvency Act, it is possible for liquidators to claw back money paid out by Kebble in the two years before his death if such payments were not made for value, a provision originally intended to prevent an insolvent person or company from showering borrowed money on friends and relatives before declaring bankruptcy.

That left the ANC in a difficult position, with the party at times claiming that Kebble received no benefit at all for his contributions – making the money recoverable – and at other times that he profited.

“Did the ANC Western Cape give anything back to Brett [Kebble] because he had given them this money?” the lawyer for the liquidators, Alec Brooks, asked Mcebisi Skwatsha, then secretary for the ANC in that province and now deputy minister of rural development and land reform, in a 2006 session.

“No, certainly not,” Skwatsha said. If donations came with conditions attached, he added, “we would not be able to meet them”.

In later court papers, however, the ANC argued that Kebble had “obtained the benefit of access to political decision-makers and lawmakers that would be beneficial to him, both directly and indirectly, by virtue of its benefits to the companies in which he had an interest”.

The men who moved the money

Brett Kebble used a whole array of corporate entities to move around tens of millions of rands, including the proceeds of the sale of shares essentially stolen from other shareholders in the mining companies he controlled. Some of these structures started life as legitimate trusts, others were born in fraud.

But Kebble also had the willing services of high-flying individuals to act as his conduits and – by their account unknown to them – to launder his money.

Lunga Ncwana, once a close associate of Kebble and now the owner of the Cape Town All Stars football club, channelled millions of rands for Kebble. Sello Rasethaba, whom Kebble was on his way to meet the night he was shot in an “assisted suicide” and now an empowerment heavyweight, received R2-million from Kebble, apparently on behalf of the ANC.

One of the more curious conduits was Iqbal Survé, best known for his control of the Independent Newspapers stable, and his Sekunjalo, best known for controversial government contracts.

In 2006, when asked by an insolvency inquiry about R870 000 Kebble had given him, Survé said: “To the best of my recollection, and I have to admit that I am not entirely certain about this, but these funds that came to be forwarded to the ANC for me … I think it was one of the ANC anniversary celebrations that occurred, I can’t remember which one, and I subsequently decided not to forward the money and in fact to return it … I opted not to be party to the funding of the ANC in this way.”

When the Western Cape ANC was in desperate need of cash, Survé said, he agreed to front it money that came via Kebble, because of “a timing issue”. Despite the implication that money from Kebble would, for some reason, not clear banking delays in time (whereas money from Survé, for some reason, would), Survé ended up ­receiving R500 000 from Kebble two weeks before Survé himself passed on R100 000, and the full disbursement would take months.

As some suppliers demanded company cheques from Sekunjalo rather than his personal cheques, Survé said, money ended up passing from Kebble’s companies to Kebble’s control, from there to Survé, who set it off against a Sekunjalo account, so that some suppliers to the ANC were paid by Sekunjalo, with the trail only unravelling through forensic auditing years later. – Phillip de Wet