Target the traders in ivory war 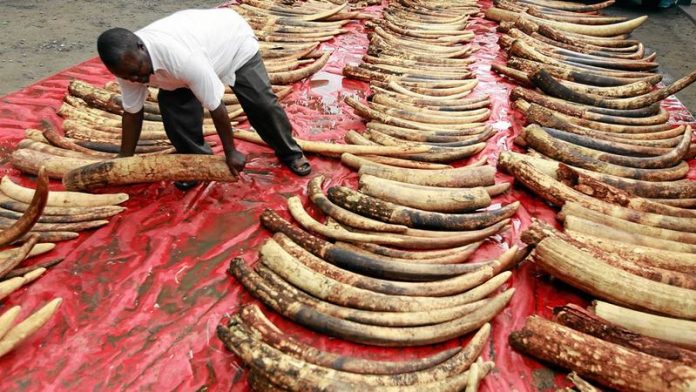 The threat to Africa’s remaining elephants from the illegal ivory trade is diverse and increasingly dangerous. In some parts of Central Africa, the elephant’s long-term future is in serious doubt. The rate of killing is increasing and the threat comes from several quarters, making it harder to understand and combat.

These points were highlighted in the report by the Environmental Investigation Agency, which noted that official visits to Tanzania in March 2013 by Chinese President Xi Jinping and by a Chinese naval task force in December last year created a boom in illegal ivory sales and prices doubled to $700 a kilogram. The Tanzanian and Chinese governments have dismissed the report.

The evidence in the report provided an insight into the diverse nature of the illegal ivory trade and diluted what has become, in recent years, the dominant story about ivory – that poaching is increasingly being carried out by armed insurgent or rebel groups and is primarily funding rebellions and enriching brutal militia groups such as the Sudanese Janjaweed. This angle has captured the attention not just of conservationists but also of intelligence organisations and governments concerned with security in East, Central and parts of West Africa. The evidence of the slaughter of elephants in national parks in Cameroon, Chad and the Democratic Republic of the Congo (DRC) by rebels or militias highlighted the security costs of the environmentally damaging trade.

100 000 elephants killed in Africa since 2011
There is no denying the seriousness of the threat poaching poses to elephant populations. A report by researchers led by Colorado State University’s George Wittemeyer calculated poachers have killed about 100?000 elephants in Africa since 2011. The rate of killing exceeds 7% of the estimated African elephant population – even higher in Central Africa – overtaking the average annual population increase of 5%. This could lead to the extinction of elephants in Central, West and parts of East Africa, where they are scattered in small populations from Mali and Chad, through Cameroon, Central Africa Republic and northern DRC into South Sudan, northern Kenya and Somalia. Poor policing of reserves, porous borders and regional conflicts mean insurgent groups proliferate, using resources such as ivory to prolong their conflicts and enrich their leaders.

Insurgency as a driver of the killing of elephants grabbed the headlines because it was a new and sensational angle. It fitted a convenient frame about the war on terror, simplifying a complex story. The involvement of violent groups such as al-Shabab in Somalia and the Lord’s Resistance Army (LRA) in Uganda gives the fight against poaching a new urgency. In South Sudan, poaching is increasingly a way to provide funds for arms and meat for fighters in the country’s year-old civil war. Lieutenant General Alfred Akuch Omoli, of the South Sudan ministry of wildlife conservation and tourism, says: “Since the start of this conflict we have noticed poaching has become terrible. Rebels are poaching and the government forces are poaching because they are all fighting in rural areas; the only available food they can get is wild meat.”

Decimated during decades of war since the 1980s, South Sudan’s remaining 5?000 elephants are threatened with extermination as poachers, whether hungry individuals, South Sudanese groups or the LRA, kill with impunity.

African intelligence chiefs who met in Harare in July under the auspices of the Committee of Intelligence and Security Services of Africa warned that ivory poaching was a serious security threat as there was “evidence of fledgling linkages between poaching and wildlife trafficking on one hand and transnational organised criminal activities, including terrorism and weapons proliferation on the other”. Reports of the meeting highlighted how the trade helped al-Shabab, the LRA, South Sudanese rebels and insurgent groups in Chad to fight President Idriss Déby.

What was not said by the intelligence heads was that the Sudanese government-backed Janjaweed militias, the DRC army and the Ugandan army are also implicated in poaching. And they ignored the role of corrupt politicians and government or security officials in ivory smuggling. This shows that insurgency is not the only factor driving the killing of Africa’s elephants.

Concentrating on the insurgency-ivory link alone distorts our understanding of the trade and ignores that in those parts of Africa where insurgency is not a threat but poaching continues the motivation is greed.

Political elites involved
There is a growing body of evidence that political elites and government officials in Zimbabwe, Mozambique and Tanzania are heavily involved in poaching and the smuggling of ivory and rhino horn for gain and to fund political patronage.

The view that the illegal trade is highly diversified is supported by the Environmental Crime Crisis report by the United Nations Environment Programme and Interpol, which says that environmental crime globally brings in $123-billion. It estimates that between 20?000 and 25?000 elephants are killed annually in Africa from a population of 420?000 to 650?000. There is a particularly high rate of killing of forest elephants in Central Africa, whose population declined by 64% between 2002 and 2011. Its findings are supported by another in-depth report produced by Born Free USA and the Centre for Defense Analysis.

The Born Free evidence highlights criminal and political connections to poaching in Zimbabwe, Tanzania, and Mozambique, where the huge Chinese and East Asian demand for ivory is accelerating the already high rate of poaching. In Zimbabwe, Zanu-PF security forces and political elites have gained control of large areas of land through land seizures and purchases, shifting conservation areas into the hands of people concerned more with wealth than preservation of keystone species such as elephants.

The report’s evidence shows that poachers have been trading ivory with the backing of corrupt politicians and officials. They even sell elephant meat to the army, as the government’s dwindling finances cannot support its military.

Insurgency and conflict are part of the problem but so are political corruption, organised smuggling and criminal networks. Curbing it demands prosecuting not only poachers, but also the “big men” controlling the trade in the African ports or cities from which the ivory goes to East Asia.

Efforts to end the illegal trade have to aim not just at stopping the killing but also at striking at those who manage the demand – the buyers, the middlemen and the politicians and officials who grow rich from their percentage of the proceeds.

This conclusion is emphasised when one looks at the country in Africa with the best conservation record, Botswana. Corruption within government or the civil service has been fought with success. Politicians are accountable and the courts are independent and effective. The president, Ian Khama, remains committed to conserving wildlife and has achieved good results, witnessed by a booming elephant population estimate at over 200?000 – about a third of Africa’s total population.

Botswana demonstrates that peace is beneficial to wildlife but also that good governance means successful conservation.

Tourism in Africa loses R343-million per year through elephant poaching