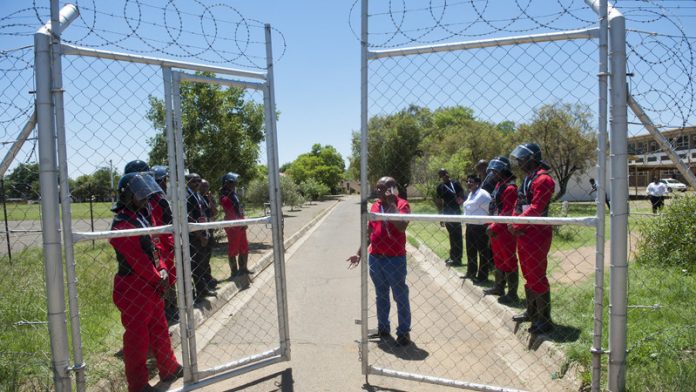 The Economic Freedom Fighters (EFF) leadership is not leaving anything to chance when it comes to security at its inaugural conference in Mangaung this weekend. It has enlisted a Durban-based private security company – Tactical Security – to keep a close eye on unruly delegates during the three-day national assembly.

The strong build guards, most of whom wore tactical gear helmet face masks, boots, bulletproof vests and red overalls, stood firm at the gate not allowing anyone to enter the premises where registration was taking place, without being searched. A number of police vehicles were also present around the premises.

Chaotic conferences
In the past few weeks, a number of violent incidents by EFF members were recorded, as members jostled for positions. In November, it was reported that an EFF conference in Kimberley at the Savoy Hotel became chaotic when some members attended the conference armed with machetes, pangas and bricks. The hotel was vandalised and members threw bricks at each other contesting for positions.

Another meeting that took place in Meyerton in Midvaal early this month resulted in chaos when some members were not allowed to participate in the Gauteng provincial conference. The members accused EFF leader Julius Malema of ordering guards to shoot them with rubber bullets at a conference intended to elect provincial leaders.

Malema added that when he was part of the ANC youth league, he and his counterparts were told to destabilise Congress of the People (Cope) and ensure that the new party failed from its inception. He said the same tactics the ANC used against Cope would not work in the EFF because he knew the strategies.

The EFF leadership has put strict measures in place to ensure that the national assembly was violence free:

Nominations for top spots
The conference will start tomorrow and the top six will be nominated and voted for. There seems to be two factions contesting against each other within the EFF – those from the ANC Youth League and those of the September National Imbizo (SNI).

While Julius Malema is uncontested for the position of party leader, Floyd Shivambu has been nominated for deputy president by former ANC youth league members.

Shivambu will be contested by Khanyisile Litchfield-Tshabalala as deputy who is seen to be part of the SNI group. MP Godrich Gardee and Mpho Ramakatsa, the national co-ordinator of the EFF, are contesting for the position of secretary general.

The top six would then be announced on Monday and then the nomination and voting of additional national executive committee (NEC) members will take place on the same day.