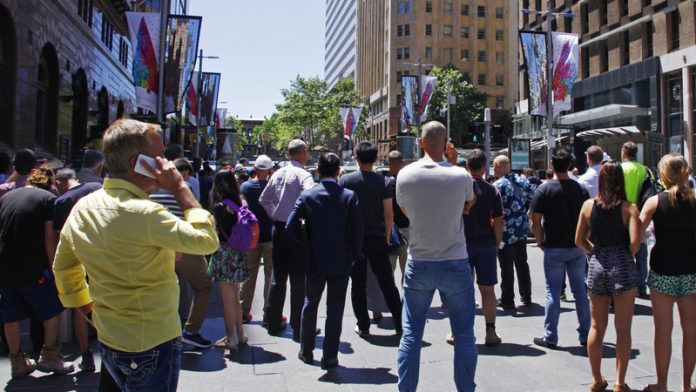 A square in the heart of Sydney, Australia, was evacuated as hundreds of armed police surrounded the Lindt chocolate cafe, where a flag – black with white Arabic writing – was held to a window by customers.

Some six hours into the siege, three men emerged from the popular cafe and ran for their lives, two from the front door and one from an emergency exit. Around an hour later two women also fled.

It was not clear if they escaped or were released.

A hostage runs towards a police officer outside Lindt cafe, where other hostages are being held. (Reuters)

Police, including paramilitary officers, cordoned off several blocks around the cafe as negotiators tried to defuse one of the biggest security scares in Australia for decades. Snipers and a SWAT team took up positions around the cafe and police helicopters flew overhead.

New South Wales state deputy police commissioner Catherine Burn said negotiators “have had contact and continue to have contact” with the armed person holding the hostages, but they did not know the motivation for the siege.

“We do not have information to suggest that anyone is harmed at this stage,” she said, adding that the number of hostages “is not as high as 30” as some reports had suggested.

Australia has been on high alert after the government raised concerns that citizens who have fought alongside jihadists in Iraq and Syria could return home radicalised and capable of carrying out attacks.

State police commissioner Andrew Scipione said “we have not yet confirmed this is a terrorism-related event,” despite Prime Minister Tony Abbott convening a national security meeting to deal with the “disturbing” development.

“We don’t yet know the motivation of the perpetrator, we don’t know whether this is politically motivated, although obviously there are some indications that it could be,” Abbott said, while urging people to get on with their daily lives.

The cafe incident came just minutes before police announced a man had been arrested in Sydney on alleged terrorism offences.

They said the 25-year-old was seized as part of “continuing investigations into the planning of a terrorist attack on Australian soil and the facilitation of travel of Australian citizens to Syria to engage in armed combat”.

Scipione said he did not believe the matters were related.

The White House said US President Barack Obama had been briefed about the crisis.

Patrick Byrne, a producer at Channel Seven whose newsroom is opposite the cafe, said staff at the television station watched the situation unfold.

“We raced to the window and saw the shocking and chilling sight of people putting their hands up against the panes of glass at the cafe,” he told the Australian Broadcasting Corporation.

“This was just extraordinary.”

Demands from hostage taker
A man holding the hostages has demanded that a flag of the Islamic State group be delivered to him and warned that four bombs have been planted around the city, a report said.

Channel Ten said it had spoken to two of the hostages inside the cafe and the man holding them had made a series of demands.

“Our #TenNews team have spoken directly to 2 hostages inside the café. They are confirming 2 demands from the perpetrator,” the network tweeted.

“He needs the ISIS flag to be directly delivered to the cafe; And his 2nd request is to speak to the Prime Minster.

“They also state there are 4 bombs two inside the Lindt café at Martin Place – and two further in the Sydney CBD.”

There was no confirmation from police.

National security response
The scene of the drama, Martin Place, is Sydney’s financial centre and houses several prominent buildings, including the New South Wales Parliament, the US consulate, the country’s central bank and the Commonwealth Bank of Australia.

Many shops in the area opted to close early due to the scare, with only a trickle of people walking along usually bustling streets.

At the nearby Sydney Opera House, where police had swept the area earlier Monday, evening performances were cancelled.

“It’s sad to think this is my home and that it could happen anywhere,” said onlooker Rebecca Courtney.

The government in September raised its terror threat level and police conducted large-scale counter-terror raids across the country. Only two people were charged even though 800 officers were involved in the operation.

More than 70 Australians are believed to be fighting for Islamic militants in Iraq and Syria. At least 20 have died and there are growing concerns about youths becoming radicalised and mounting attacks at home.

Journalist Chris Kenny, who was in the Lindt cafe just before the siege began, said he understood the automatic glass sliding doors had been disabled.

He added that a woman who tried to get in as he was leaving saw someone with a weapon.

“She mentioned it being taken out of a blue bag and people were straight away asked to put up their hands,” he told the newspaper he works for, The Australian.

The joint statement with the Grand Mufti of Australia said that “such actions are denounced in part and in whole in Islam”, noting they awaited further information about the identity and motivations of the perpetrators.

An armed assailant was holding an unknown number of hostages inside a central Sydney cafe on Monday, police said, with local television showing some being forced to hold up a black flag with white Arabic writing in the window.

The Grand Mufti and the council pledged their “full support and solidarity with the victims and their families and aspire to a peaceful resolve to this calamity.” – AFP, Reuters

Jacob Dlamini’s new book, The Terrorist Album, tells the stories of people saddled with that catch-all phrase during apartheid and how their presence on that list made them fair game
Read more
Environment

This entails putting them at the centre of national strategies, but doing it without high CO2 releases
Read more
Africa