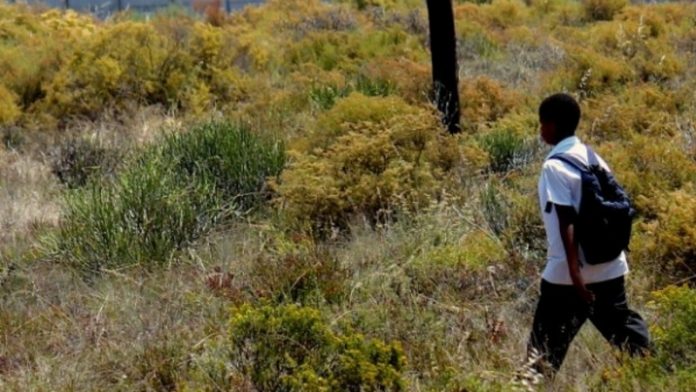 Following allegations of child labour on a grape and mushroom farm in the Hex Valley, outside De Doorns, investigators have also apparently threatened to prosecute the parents – whistleblowers who reported their children’s apparent exploitation.

Fear of this prosecution has gagged the families, and shows the complicated convergence between unlawful child labour and poverty on South Africa’s farms.

“Please leave us alone. We do not want the Department [of Labour] to lock us up. We cannot speak about this.”

These were the words of a farm worker whose child was allegedly employed on Royal Mushrooms farm for a pittance. GroundUp had arranged to meet the families and children earlier this month, but an appointment was cancelled at the last moment.

Provisional details of the children’s labour stint have however emerged via a local farm workers advocacy group – the Hexvallei Plaaswerkers Assosiasie (HPA).

HPA chairperson Wilfred Frolick has met with the parents, interviewed the children and seen the hand scribbled payslips that they received for a week’s part time work in November.

R50 for 15 hours
The children, three school-going boys of ages 13 and 14, are all residents on a farm neighbouring Royal Mushrooms. They worked in the vineyards of Royal Mushrooms, which produces mushrooms and table grapes, for about three hours after school every day for a week, said Frolick.

“They appear to have been paid according to their ages, with the thirteen-year-old receiving R50 and the oldest one (a fourth boy aged 15) receiving R150,” he added.

“Fifty rand for fifteen or so hours work? In my opinion this wage amounts to exploitation. Those kids were working in the vineyards, and were exposed to poisonous chemicals. They were not issued with the proper safety gear, and that is not good for someone’s health.”

The HPA is investigating claims by two other boys, aged 11, who say they worked on Royal Mushrooms during that same week. Frolick had spoken to them, but not seen their pay slips.

Meanwhile farmer Hannes Jacobs, whose lawyers at Mostert and Bosman attorneys answered GroundUp’s queries, has denied any knowledge of any work stint by children on his farm.

“At the outset it is our instructions to state unequivocally that our client has a very strict labour policy, inter alia prohibiting the employment of any child on any basis whatsoever,” wrote lawyer Pierre du Toit.

“Our client has launched an internal investigation in order to verify the veracity of the allegations.”

In light of the Department of Labour investigation, Jacobs declined to comment further.

‘Assisting an employer’
The Basic Conditions of Employment Act prohibits anyone from employing children under the age of 15 and, specifically, in work that would place a child’s physical health at risk. Frolick had also heard that investigators from the Department of Labour had threatened to prosecute the parents, but he had not independently confirmed this.

“It would be bizarre if parents of children, who were in effect whistle blowers, were threatened by investigators of the Department,” said Jan Theron, of the University of Cape Town’s Labour and Enterprise Policy Research Group.

Yet the Act, compliance to which Department investigators are bound to enforce, does prohibit “assisting” an employer in employing an under-age child unlawfully. Parents or guardians who are found to have done so commit a prosecutable offence.

De Doorns was the epicentre of a region wide farm worker rebellion against low wages between November 2012 and January 2013. Royal Mushrooms experienced dissent among its staff weeks before the mass uprising. In October 2012 around 60 workers, many of them foreign nationals, went on strike for higher pay. At the time, these workers claimed to be earning between R150 and R200 a week.

Near the one year anniversary of that strike the Department of Social Development announced that poverty and malnutrition (especially among children) had reached crisis levels in De Doorns – precipitating a roll-out of emergency food aid.

In a labour sector where wages remain low and employment is often sporadic and seasonal, families have in the past relied on children to augment the household income.

“It is always a difficult for us to strike the balance here,” says Karel Swart, general secretary of farm workers union Csaawu. Swart speaks from experience: in 1973 his family’s poverty forced him to leave school at the age of 14 to work on a fruit and dairy farm near Ladismith.

Hard labour
The work entailed hard labour, and Swart remembers tilling hard earth with a shovel for hours on end. He earned R2.50 a week, which he says was “a lot of money in those days”.

“In many instances, child workers that Csaawu engage with have entered into employment willingly. They often tell us ‘we just want to help our families’. So for us as a union, it was a balancing act between protecting children’s legal rights, while remaining sensitive to the financial insecurity of the families from which they come,” says Swart.

GroundUp approached the Department of Labour for an interview to discuss the conundrum faced by their inspectors: how do they deal with children who, with the blessing of their parents, willingly enter into employment?

Spokesperson Page Boikanyo committed to sourcing a response from the relevant official. At the time of publication, however, a response had not been received. The department’s Western Cape office also refused to comment on the Royal Mushrooms investigation.

The issue was acknowledged by Deputy Minister of Labour Nkosi Patekile Holomisa in a speech in Upington in August, where he said that supporting child labour was “almost obligatory” for many farm working families.

But, Swart claims that Csaawu campaigns to educate parents about the importance of keeping their kids in school have been successful. This, coupled with an apparent responsiveness from Department of Labour investigators, has seen child labour all but eliminated in the union’s area of operation between Robertson and Ladismith, he adds.

This is consistent with global trends. A brochure by the United Nations’ International Labour Organisation (ILO), published this month, reported that globally there had been a 30% decline in children “trapped” in labour between 2000 and 2012 – from 246 million to 168 million. The majority of child labourers remaining are doing hazardous work, and 98 million children (59% of the total) are employed in agriculture.

Instead of battling to eradicate child labour, Bolivia’s left-wing government legalised child labour earlier this year, taking a different approach to the complexities surrounding the practice in developing countries like South Africa.

Associated Press quoted Bolivian Senator Adolfo Mendoza saying, “Child labour already exists in Bolivia and it’s difficult to fight it. Rather than persecute it, we want to protect the rights and guarantee the labour security of children.”

‘Oddity’
Both the HPA and Agri Wes-Cape, the farmer organisation which reported the Royal Mushrooms allegations to the Department, have gone to lengths to emphasise that the case is an oddity.

“Agri Wes-Cape will not tolerate child labour practices and all our members know it,” said the orgisation’s Carl Opperman, adding that “steps would be taken” after the labour department’s report is published.

“Agriculture in the Western Cape can’t afford issues like this, especially since we are players within an international market. This is only the second case of alleged child labour that Agri Wes-Cape had to deal with in the past 14 years. The first case had no merit and was proven [to be a false allegation],” said Opperman.

Frolick also said the Royal Mushrooms case was “isolated” and warned that it should not be manipulated to paint all the Hex Valley farmers in a bad light.