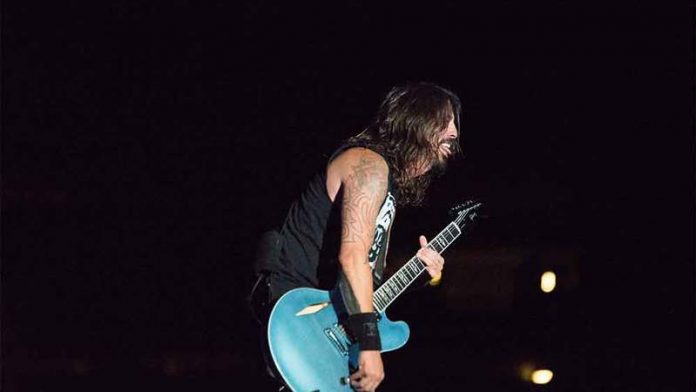 When it comes to music, the world is separated into two camps: those who love music and those who live for it. And when it comes to the United States rock band Foo Fighters, their fans definitely fall into the latter category.

Foo Fighters – on their first South African tour, which “I’ve waited here for you/ everlong” – showed music lovers just how a top-flight rock band should perform.

Twenty-seven hits and three hours later, the crowd left FNB Stadium on Saturday night feeling like a born-again congregation of the church of Dave Grohl.

Opening acts BLK JKS and Kaiser Chiefs enthralled the crowd with their onstage antics, but the vibe was killed briefly as a fight broke out – funnily enough – just as the Chiefs launched into their hit single, I Predict a Riot.

Foo Fighters bassist Nate Mendel says the band is explained as Grohl’s passion-project, and it certainly is, with the enigmatic front-man pulling out all the stops. “It’s essentially Dave’s band,” he said in a telephonic interview, and the band follows whatever Grohl does, knowing that he is leading them to uncharted territory where others have feared to tread.

Chris Shiflett on lead guitar, Pat Smear on rhythm guitar and drummer Taylor Hawkins, don’t mind being in the background when “Dave takes the stage and makes it his”, Mendel says.

Better and better
The band’s Sonic Highways tour, in support of their album and television series of the same name, launched in Cape Town last Wednesday, and Grohl took to the mic and apologised to South Africa for not touring sooner.

“We’re making up for that tonight,” he said to a deafening roar. “We’re playing until we can’t play any more.”

Opening with All My Life, the concert just got better and better, with hits from all eight of their studio albums. “We’ve got a fuck load of songs, Johannesburg. And we’re gonna try to play them all.”

From crowd-pleasers such as The Pretender, Rope, Learn to Fly and Arlandria to Big Me, Hey, Johnny Park and I’ll Stick Around, Foo Fighters did not let up on the energy that had everyone screaming until their voices were given up to the glory that is Grohl.

Even playing newer hits from their most recent album, Something From Nothing, in which Grohl screams “Fuck it all/ I came from nothing”, and Congregation, which oozes Nashville-esque honey-like goodness, fans lapped it up like consecrated wine, wanting more of this rock god who came just short of walking on water.

“Send in the congregation/ Open your eyes, step in the light”, Grohl growled to ardent followers with blind faith.

Each song was extended with blues interludes, showing off the band’s musical prowess.

Sonic Highways was recorded as part of an eight-episode series that mapped the musical history of the United States from Seattle to New York, and is essentially a Foo Fighters album at the core, but is delicately laced with each city’s iconic sounds.

Sublime soloist
Grohl took to the spotlight and made our hearts melt with joy, launching into a solo version of Wheels, with the promise of a return tour if the 50 000-strong crowd sang it back to him. It was sheer emotion as lighters and cellphone torches lit up the darkened stadium and the fans sang: “When the wheels come down/ … When the wheels touch ground …” A solo version of Times Like These tugged on heartstrings until the band launched into full electric mode because “it’s times like these you learn to live again”.

Then magic happened. Grohl, the former drummer for Nirvana – and current drummer for Queens of the Stoneage and Them Crooked Vultures – took to the drum throne and banged the hell out of the kit.

The soundtrack of a lifetime
The Foos then launched into covers of Cheap Trick’s Stiff Competition, with Hawkins on vocals, and then the duo of Grohl and Hawkins belted out Queen and David Bowie’s hit Under Pressure, which Grohl says is the greatest song ever written.

The band said it always comes full circle; they started out as a garage band playing other people’s songs, then made their own hits and came back to playing the songs they once played in their garage.

There was not a dry eye left in FNB Stadium as Foo Fighters closed with Grohl offering up his sins, singing “I’ve got another confession to make …” from Best of You and absolving them with Everlong, which sent teenage memories flooding back like a tsunami, plunging us under a wall of emotion, as the soundtrack to our lives came to life.

For me, it was a near-religious experience, with the music that I live for leading me to the altar of rock. Take a bite, take a sip and you are instantly saved by the glory of the rock gods.

Walking in Memphis singer Marc Cohn once sang the words: “Tell me, are you a Christian child?” and I answered: “Man, I am tonight!”