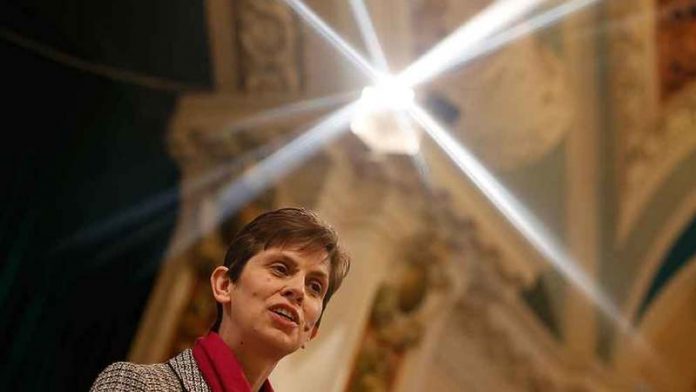 The Church of England appointed its first female bishop on Wednesday, overturning centuries of tradition in a Church that has been deeply divided over the issue.

It named Reverend Libby Lane, a 48-year-old married mother of two, as the new Bishop of Stockport in northern England.

Archbishop of Canterbury Justin Welby, spiritual head of the Church, said the Revd was a “wonderful choice”.

After long and heated debate, the Church of England governing Synod voted in July to allow women to become bishops and formally adopted legislation last month.

Women have served as priests in the Church since 1994, a decision that prompted some 470 male priests to leave in protest, many for the Roman Catholic Church.

“It is an unexpected joy for me to be here today,” Lane said in her acceptance speech. “It is a remarkable day for me and I realise an historic day for the church.”

She added: “I am conscious this morning of countless women and men who for decades have looked forward to the time when the Church of England would announce its first woman bishop.”

It has pitted reformers, keen to project a more modern image of the Church as it struggles with falling congregations in many increasingly secular countries, against a conservative minority which says the change contradicts the Bible.

Two years ago, opposition from traditionalist lay members led to the defeat of a vote in the Synod to allow women bishops, to the dismay of modernisers and the Church hierarchy.

Women serve as bishops in the United States, Australia, Canada and New Zealand but Anglican churches in many developing countries do not ordain them as priests.

A Christian since 11
Lane is married to Reverend George Lane, coordinating chaplain at Manchester Airport, and they have two grown-up children.

A Christian since the age of 11 when she used to go alone to a small church in rural Derbyshire, Libby (Elizabeth) Lane has worked for the past 14 years in the diocese of Chester in northwest England.

She lists her interests as being a school governor, encouraging social action initiatives, learning to play the saxophone, supporting Manchester United, reading and doing crosswords. – Reuters

The archbishop of Canterbury must acknowledge that disestablishment has already happened, and look to a future that deals with reality.
Read more
World

The Church of England's national assembly has given strong backing to the principle of allowing women bishops.
Read more
World

The Church of England held an emergency session after a vote against the appointment of women bishops exposed divisions in the Anglican communion.
Read more
National

A leading member of the Church of England who believes gay people can be counselled to suppress their sexuality is helping select the next archbishop.
Read more
National

The Church of England will not allow same-sex civil partnership ceremonies on its premises without the express permission of its general assembly.
Read more
Advertising
Continue to the category
Politics