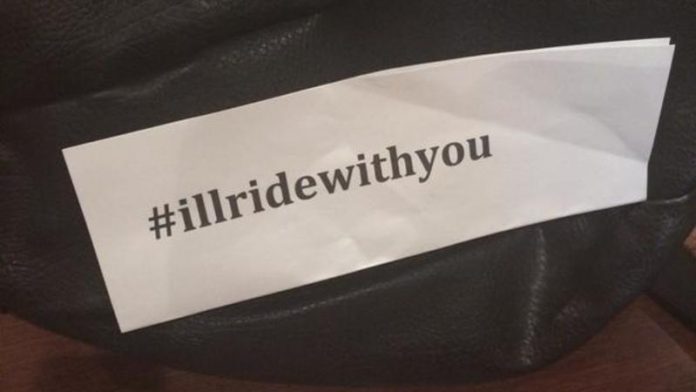 Hours after a self-styled sheikh and two of his hostages were killed in a gun battle in a Sydney café, inflaming anti-Muslim sentiment in Australia’s biggest city, a social media movement showing solidarity with Australian Muslims was gathering steam.

Inspired by the Twitter hashtag “I’ll ride with you”, some commuters heading into the city for work on Tuesday gave their support to Muslims who might feel vulnerable amid concerns about a blowback after the hostage drama.

#IllRideWithYou was trending around the world, popping up across Asia, Europe, Africa and North America as it featured in more than 300 000 tweets. Actor Russell Crowe, who grew up in Sydney and keeps a home here, added his star power to the campaign.

Sydney is home to around half of Australia’s 500 000 Muslims, with many travelling into the city for work from its western suburbs.

On one train headed into the central business district, a young woman had attached a small sign with the popular hashtag to her handbag.

“I wanted to do something and this seemed like something easy and worthwhile,” she said, asking to remain anonymous.

Anti-Islamic abuse
While police stressed that the man behind the 16-hour siege in the centre of the city was acting alone and had a history of mental instability, his move to force hostages to display an Islamic flag immediately raised hackles in some quarters.

A man shouting anti-Islamic abuse near the cafe during the standoff was moved on by police, while Muslim community leaders reported women wearing the hijab had been spat on.

“We’re still getting reports of incidents coming in today,” said Samier Dandan, a spokesperson for the Australian National Imams Council. “But we are quite encouraged by this campaign. It shows the support of the Australian public and how much of a big heart they possess.”

The siege shocked Australians, marring what had been shaping up as a relaxed sunny week in the harbour city ahead of the Christmas break.

Overwhelmed
“There is nothing more Australian than dropping in at the local café for a morning coffee and it’s tragic beyond words that people going about their everyday business should have been caught up in such a horrific incident,” Prime Minister Tony Abbott told reporters.

He cautioned that it would take time to investigate the gunman’s motives.

The hashtag began trending on Twitter ahead of the evening commute on Monday, sparked by a Facebook post by Sydney woman Rachael Jacobs who described her encounter with a Muslim woman who took off her head covering: “I ran after her at the train station. I said ‘put it back on. I’ll walk with u’.”

That prompted other Sydneysiders to take to Twitter, detailing their bus and train routes home and offering to ride with anybody who felt uncomfortable, using the hashtag “Illwalkwithyou”.

On Tuesday morning, Jacobs said she was overwhelmed with the campaign she had inadvertently started: “Mine was a small gesture because of sadness that someone would ever feel unwelcome because of beliefs.” – Reuters