Julius Malema: There’s no ‘me’ in revolution 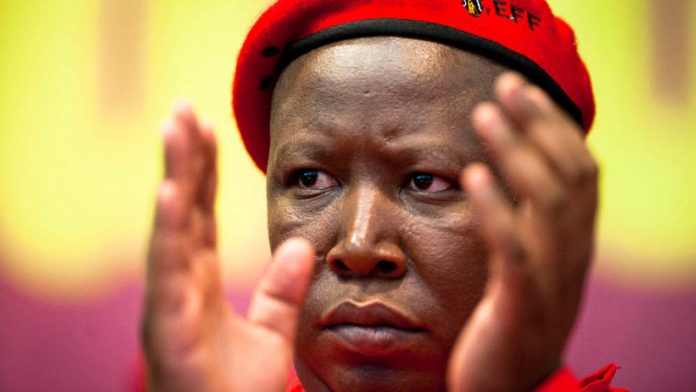 The Economic Freedom Fighters finally went through a proper election process this week. Buoyed by his unopposed election as party president, Julius Malema says he will prevent the ‘cult of personality’ from ruining the party.

How are you going to prevent the Economic Freedom Fighters (EFF) from following in the footsteps of the Congress of the People (Cope) and the United Democratic Movement as a result of founding leaders’ tendency to want to lead forever?
We have done it here. The position of president was available. I don’t want the politics of personality cult. I do not intend serving [as EFF president] until I am removed by the coffin. I also want to be led by others. I don’t have uncontrollable ambitions. I don’t have an obsession with leading. I have been led before.

How long do you intend to serve as EFF president?
There have been no discussions around terms [of office] in the EFF. Otherwise, if I speak about terms, members will be tempted to respond to me through the media.

Most EFF supporters are beneficiaries of the government’s social grants system. Why do you want the grants stopped?
We are not saying the government must stop the grants now. What we are saying is that you can’t have grants as a sustainable solution. We take grants as an immediate intervention, but they must be linked to job creation. Those who are receiving grants should be given a priority when it comes to jobs. That way, we will gradually do away with the grants.

For now, we support the grants. That’s why in our manifesto we are calling for the increase of all social grants. Because what people are receiving now cannot do anything to improve their lives.

But, in the long term, job creation must be the priority.

Don’t you think your call for people to occupy vacant land in the country forcefully might result in violence?
There won’t be violence at all. The state must appreciate that the people are looking for land. What will lead to violence is the inability of the state to redistribute land. We have seen that as a potential to cause a civil war.

Do you have any regrets about the EFF’s disruptive conduct in Parliament, which resulted in the suspension of the party’s MPs?
If we get the opportunity to do what we were suspended for, we will repeat it. We don’t regret anything at all. I’m speaking for all those who have been suspended. We don’t care about salaries. If people think by taking our salaries they are punishing us, theirs is a capitalist mentality, which we have no respect for. We must engage each other politically and win each other through political persuasion.

You accused an unnamed “enemy agent” of working to ensure your conference did not succeed. Who are you talking about?
The ANC is hard at work trying to destabilise the EFF the same way they did with Cope and other parties that were formed against it. I know very well that they have established a committee led by ANC provincial chairpersons to receive members of the EFF who are coming to the ANC. They tried everything in their power to destabilise our conference, but they did not succeed. Even capital itself is not happy with the type of politics we are advancing. They, too, are hard at work trying to destabilise EFF.

Is the EFF involved in the formation of the National Union of Metal Workers of South Africa’s United Front?
The United Front must just join the EFF. We are the only movement with a clear programme of what needs to happen. They must stop what they are doing because they are not sure if they are forming a nongovernmental organisation or a political party. We in the EFF have taken a very conscious decision. We are not a non-governmental organisation; we are a political fraternity. That’s where we should fight the battle for economic freedom.

What’s your strategy to sell EFF for the next elections, beyond campaigning around the ANC’s failures?
I can’t reveal our strategy publicly. That will be giving the enemy agent our plan. But be rest assured, we have got a strategy. There are four metros – Tshwane, Johannesburg, Ekurhuleni and Nelson Mandela Bay – that the ANC will not be in charge of come the 2016 local government elections.