It helps to have friends in high places – ask ex-con Gayton McKenzie’s pals and relatives, some of whom became millionaires overnight.

McKenzie cut in his cronies to the tune of more than R330-million in the R2-billion Gold Fields empowerment deal. ANC chairperson Baleka Mbete also pocketed shares worth a cool R28-million.

McKenzie was brought into the deal along with President Jacob Zuma’s one-time lawyer, Jerome Brauns, to help the mining house to secure new-order mining rights from the government. McKenzie didn’t answer questions and Gold Fields refused to comment. 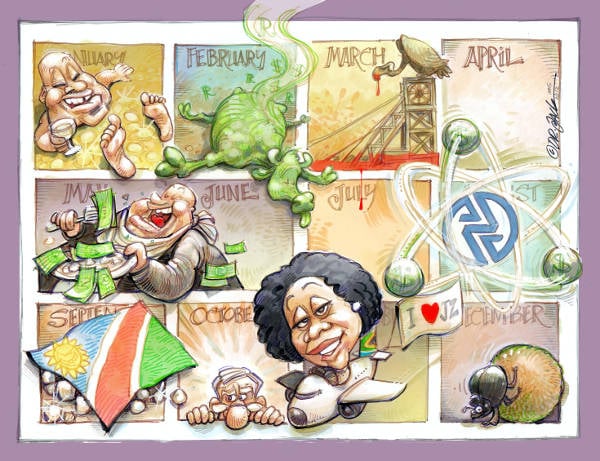 One of South Africa’s biggest unsolved mysteries is the Vrede dairy project in the Free State.

The provincial agriculture department has yet to answer numerous amaBhungane queries or explain to taxpayers how Estina, a company with no agricultural experience, led by a sales manager, was handed a R570-million dairy project without following due process.

The company’s only qualification was its allegedly close proximity to the Gupta family. Questions regarding the project’s benefits have been ignored.

After amaBhungane exposés last year, the national treasury conducted its own investigation and found that the deal flouted treasury rules and was undertaken without budget, a feasibility study or subsequent monitoring.

The company came under fire from the national department of water affairs and Vrede residents after it was revealed that 30 dead cows had been dumped in a ditch close to a river that supplies the town with drinking water.

The Blyvooruitzicht gold mine has been described as a war zone where dozens of beatings and murders have been reported since the bankrupt mine was taken over by Goldrich Holdings. An amaBhungane investigation suggested that 40 people, mostly illegal miners, have been killed.

Goldrich is managed by Fazel Bhana and Thulani Ngubane, who were among those embroiled in the 2010 Aurora mining debacle.

Allegations of violence at the hands of the Goldrich security guards, especially against zama zamas (illegal miners), were rife and a leaked video, showing the beating of two alleged cable thieves, highlighted the brutality of security personnel. The men were later found dead in a nearby dam. Police officers told amaBhungane the police were overwhelmed by the violence and sometimes failed to respond to it.

Swaziland’s bigwigs think they should be immune from criticism. Several journalists, human rights activists and opposition party members have been jailed for opposing the monarchy of King Mswati III and his placemen – and the courts seem to do little to protect their freedom of expression.

Chief Justice Michael Ramodibedi brought contempt of court charges against prominent editor Bheki Makhubu for daring to find fault with him in the Nation magazine. After Makhubu had spent 20 days in custody, Ramodibedi personally opposed his release on bail.

For speaking his mind, Makhubu was sentenced to two years in prison or a R200 000 fine.

Ramodibedi, meanwhile, has been suspended as a judge in his home country of Lesotho.

For someone who claims that people often drop his name to get ahead, the president had no problems in helping his nephew, Khulubuse Zuma, to clinch a $2-million deal for his controversial mining company, Aurora Empowerment Systems, at a time when Aurora was desperate for a cash injection.

GEM has taken court action to recover the $2-million, which allegedly disappeared.

Texas oilman Kase Lawal’s cosying up to the ANC and Zuma apparently paid off when he was handed billions of rands of South Africa’s civil servants’ pension savings.

The Public Investment Corporation (PIC) had given repeated assurances that it would hold off until the Texan’s cash-strapped company tapped into significant new oil fields in Nigeria to prove its viability.

In total the PIC has invested around R3-billion in Lawal’s company, Camac Energy.

Lawal has pledged millions to the Jacob Zuma Education Trust, as well as helping him to land an honorary doctorate from Texas Southern University in the United States.

National Council of Provinces chairperson Thandi Modise bought a R4.9-million farm in 2011 and never looked back – literally – as she apparently had no clue about what was happening there.

After her allegedly unpaid workers absconded, the Society for the Prevention of Cruelty to Animals found dozens of animals had starved to death while others had resorted to cannibalism.

AmaBhungane revealed that the farm had been left under the management of Modise’s former boyfriend and an ANC councillor in Ekurhuleni, Abdul Mogale.

This was despite American-owned Westinghouse being recommended for the bulk of the work in both 2011 and 2013.

The U-turn raised eyebrows about possible political interference, and Westinghouse demanded access to documents relating to the contract.

After releasing them in dribs and drabs, Eskom finally handed over most of the records under threat of a contempt of court case and the potential jailing of two of its senior officials.

Swapo is the gift that keeps giving – especially to individuals close to it.

What was meant to be an empowerment scheme aimed at supplying rough diamonds to beef up the local industry appears overwhelmingly to serve the interests of individuals close to state power.

An amaBhungane investigation found that politicians, their children and businesspeople affiliated with Swapo dominate the list of handpicked recipients, known as “sight-holders”, who have benefited from more than R12-billion in diamonds over the past six years.

Horse-racing enthusiast Solly Bhana and his diminutive son Fazel, along with several of their relatives and associates, have spent another year dodging responsibility for the wrecking of two Pamodzi Gold mines.

This is despite their allegedly crucial role in running both operations, which came under the control of failed mining investment company Aurora Empowerment Systems.

The already distressed assets were all but destroyed, and Aurora’s inability to raise investment caused severe suffering to thousands of unpaid workers.

The Bhanas apparently received millions of rands from Aurora’s bank accounts when the company was technically broke.

liquidators. At the same time, it has emerged that the father-son team has been embroiled in other dubious deals, including, it is alleged, in Dubai.

Despite bitter complaints that she is an “absentee” board chairperson at South African Airways (SAA), Dudu Myeni is still standing while her board critics have been given the bullet. Why is she apparently untouchable? Could it have anything to do with her up-close-and-personal relationship with Zuma? Myeni defied Public Enterprises Minister Lynne Brown, who stated publicly that she had instructed Myeni to reverse the suspension of Monwabisi Kalawe, the SAA chief executive.

AmaBhungane revealed that Myeni and her child were absorbed into Zuma’s extended family many years ago. Scorpions records also showed that she received recurrent cheques from Number One.

She is the executive chairperson of the Jacob Zuma Foundation.

This is the story that just keeps on giving, perhaps until Zuma “pays back the money”. While the state insists the upgrade was to provide top-of-the-range security to the First Citizen, amaBhungane obtained 12 000 pages of evidence showing it was about more than providing bullet-proof windows, electric fences and state-of-the-art surveillance.

After a drawn-out application using the Promotion of Access to Information Act and an ongoing court battle, the pages released to amaBhungane by the department of public works revealed a swimming pool, visitors’ centre, cattle kraal, marquee area and other non-security goodies at his simple rural homestead.