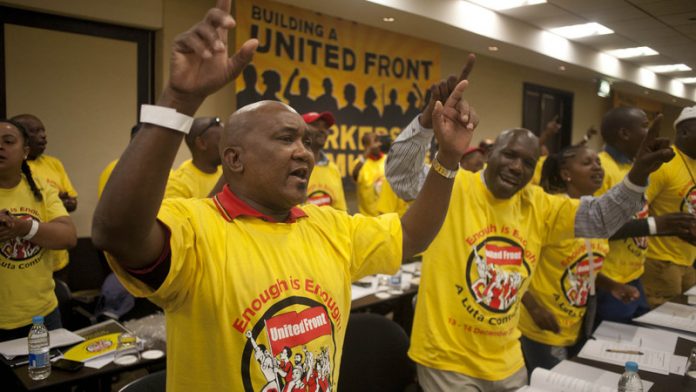 Since its December 2013 special national congress’ call for trade union federation Cosatu to sever its ties with the ANC, the decisions of the National Union of Metalworkers of South Africa (Numsa) have received poor analysis. Most misrepresented has been the union’s resolution for Numsa to lead in the establishment of a United Front.

Despite numerous statements that explained that the envisaged front was a movement whose primary objective is to strengthen and co-ordinate union and community struggles, commentators and analysts continued to describe the United Front as “a party-in-the-making” for electoral contests in 2016 and 2019.

Unfortunately, it is through these jaundiced eyes that the same commentators have analysed the outcomes of the Preparatory Assembly for the United Front that was held in December last year.

Now that the assembly reiterated the view that the United Front was not an electoral political party but a movement that intends to struggle for a “democratic and egalitarian society”, those fixated to the position that the coalition was a party are characterising the whole initiative as riddled with contradictions and united only by antagonism towards to the ruling party.

Days after the assembly, more than one editorial opined that the danger for the front “lies in the fact that the new movement continues to define itself largely in terms of what it is not, rather than what it is” and will therefore disappear into political oblivion like Bantu Holomisa’s United Democratic Movement or the Congress of the People (Cope).

For anyone who was at the preparatory assembly nothing could be further from the truth. While there were intense debates among the 348 delegates that represented 71 organisations, there was convergence on key areas on the agenda. For an example, there was unanimity about building united front whose vision is a democratic society “without huge inequalities; disparities; poverty; legacies of colonialism and apartheid; corruption and unaccountable government”.

There was also convergence on building solidarity; collective needs and interests trumping profits and other elite interests; protection of the environment; opposition to anti-poor and pro-rich economic policies; extending democracy in both political and economic spheres; and campaigns against corruption, failing service delivery, increasingly unaccountable governance, police brutality, violence against women, children, gay and lesbian people.

As it is to be expected, with organisations and movement that come from different backgrounds and that have varied experiences; areas of disagreements are bound to emerge.

As the meeting in December was a preparatory gathering, areas where there was no convergence were referred for democratic discussions in provinces and within constituent organisations of the front. What those who pooh-pooh the outcomes of the assembly miss is that in more than one way, small steps were taken through discussions to build a different kind of politics to the ones who have become accustomed to.

First, the assembly asserted the principles of democratic plurality, diversity, political tolerance and respect for different views within the front. Participants committed themselves to politics of mutual listening and learning where participating organisations and individuals influence each other.

The adopted resolutions warn against any know-all pretences and reliance on trans-historical blueprints. Referring areas on which different organisations did not see eye to eye on back to constituencies was therefore no train smash.

The assembly agreed that the front must be a learning space where organisations travel together, discover solutions jointly and unlearn oppressive, undemocratic and sexist methods of organisation and struggle.

The second way in which the united front hopes to inculcate different politics is to call on all those who associate with the coalition to acknowledge their own weaknesses and adopt politics of consistency that call on all, to actively reflect on and address their own racism, sexism, homophobia, xenophobia and privilege. The personal is political and there is no room within the front for talking left and walking right.

Third, the organisations that were at the assembly committed themselves to confidence-building struggles where they fight for winnable demands while also democratically re-imagining and building their long-term vision of an egalitarian society.

Although there are no guarantees of success, the United Front hopes to build a mass movement in this country through galvanising the tributaries of ongoing struggles into a torrent.

Those who define politics as a game within the purview of parliamentarians, political parties or paid politicians will remain blind to attempts by delegates at the meeting in December to put actions of ordinary people to determine their destiny as the real politics.

Equally, for those who equate politics with contests that we hold every five years, mass campaigns involving millions of people acting directly through their movements will not easily fit into their narrow political boxes.

They will fail to appreciate the steps that ordinary are taking to reclaim mass politics and through their actions transform themselves from being political subjects into being political agents.