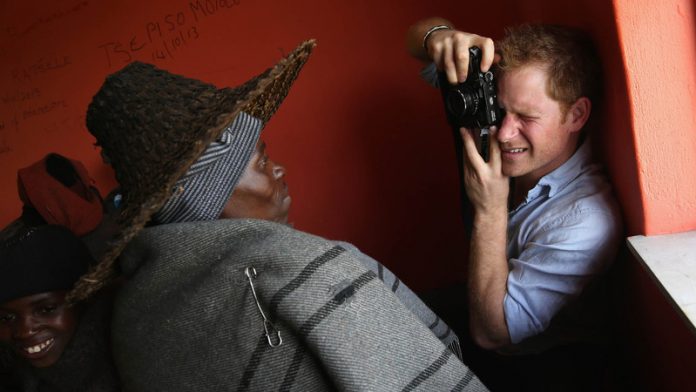 Prince Harry squints like a serious photographer as he points his £729 Fuji X100 camera at a Lesotho herder. The red-walled room they are in emphasises the intimacy of the moment, as the youth poses patiently and Harry seeks that perfect, defining instant of truth.

What is wrong with this picture? Where to start? It is a specious ­salmagundi of complacent assumptions and frightening arrogance.

Look again. The young herdsman is dressed in “traditional” garb, just as colonial subjects might have worn a “native” costume to meet Queen Victoria. In a painting in the National Portrait Gallery called The Secret of England’s Greatness, done by Thomas Jones Barker in about 1863, the ruler of the British Empire presents a Bible to an ambassador from East Africa who wears exotic “tribal” clothing. The positioning of prince and herder in this photograph is not so different.

It may seem harsh to accuse a young man who is seen here taking a sensitive portrait of one of the people helped by his charity of posing like a Victorian imperial monarch next to a colonial inferior. But that iconography is undeniably present. This picture’s appeal – which meant that it made the news – is its portrayal of Harry. The African in this picture is only there to make a prince look good. The contrast of the royal and the herdsman is as stark and as arrogant as in any Victorian imperial portrait.

For a monstrous complacency underlies this meeting. Prince Harry is there to help and to take photographs. His charity supports a school for Aids orphans, and it is a recipient of his philanthropy who poses here. But a report on Harry’s “touching” photographs does not even name the people in them. They are here to represent something more vague: Africa, poverty and, as they might say at the royal Christmas lunch, “those less fortunate than ourselves”.

The polarity here between a recipient and giver of charity is so archaic and insulting you wonder how anyone can keep a straight face. It truly is the rich man in his castle, the poor man at his gate – but do we still believe God ordered their estate? Can we seriously, in 2014, look at this picture and fail to ask the obvious, glaring question – what gives Harry the right to be “generous”, with either money or compassion?

One of the people in this picture was born to poverty and toil. The other was born to palaces and blood sports. And Harry sits there taking a picture, so compassionate from his life of inherited position and wealth. Can we really fall for this hokum in the 21st century?

Perhaps the reason we can is connected with the camera that Harry wields so well. Photography has taught us to see Africans as people to be photographed. In the 19th century such photographs were coldly ethnographic. Exotic costume was emphasised. But of course, Prince Harry does not see himself as a colonialist with a camera – and in fact his monochrome portrait of this young man concentrates on his face, not his dress. It is indeed sensitive.

The prince is playing a photojournalist, taking pictures that a long tradition of visual reportage has schooled us to see as compassionate and humane. Photographers from Don McCullin to Kevin Carter have established Africa as the place where photography becomes urgent, important, radical and profound.

Prince Harry’s photographs ape such reportage, without the nasty bits. There are no vultures here. This scene is remarkably clean and decorous. It is a staged, prettified version of rural Africa carefully selected so as not to be distressing – none of McCullin’s truth – and yet Prince Harry’s pictures use atmospheric black and white to emulate the likes of McCullin and claim a fake seriousness.

Some will say his snaps are touching and insightful, because we no longer look for the real truth in images of Africa. We look instead for the image of the Westerner with a camera, who in this case is also royal. To visit Africa, to take pictures of its people – it’s another adventure for Harry. He may as well have a gun in his hand, a dead lion at his feet and “natives” kneeling around him. That would be a more honest portrayal of the attitudes to race and power that insidiously survive in this photograph. – © Guardian News & Media 2014