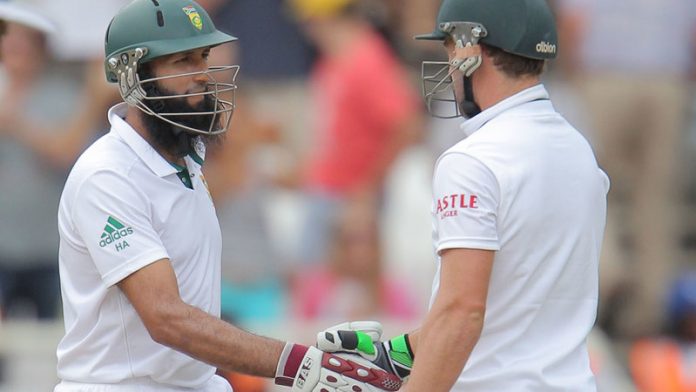 South Africa ended day two well-placed on 227 for three in reply to the West Indies 329 all out in the first innings of the third Test at Newlands in Cape Town on Saturday.

Faf du Plessis notched up his seventh Test fifty for the Proteas with his 68 from 122 balls as South Africa made steady progress towards the total of tourists.

Du Plessis was undone when he came down the track to spinner Sulieman Benn, and wicketkeeper captain Denesh Ramdin whipped off the bails in a flash to have the batsman stumped reducing South Africa to 157 for three.

The strike ended a 53-run third wicket partnership between Du Plessis and captain Hashim Amla. At the close of play, Amla on 55 and AB de Villiers on 32 had taken up the reins for the Proteas – still trailing by 102 runs. The pair notched up an unbeaten 70 run stand for the fourth wicket.

Before tea, Alviro Petersen’s dismal run of form continued as he was run out for 42. Du Plessis was facing and hit the ball to Jermaine Blackwood at backward point, and a direct hit found Petersen well short of his ground. Petersen’s 26th Test innings without a century ended after 130 minutes at the crease, facing 85 balls and striking three fours and a six. The breakthrough also brought a close to a 56-run partnership for the second wicket between Du Plessis and Petersen.

In morning play, Dale Steyn edged closer to the 400 wicket mark with 4/78 as the West Indies were bowled out for 329 in their first innings. Steyn claimed the scalps of Blackwood lbw for 56 and Jason Holder for 23 on day two to add to his two wickets on the opening day.

Steyn moved up to 393 wickets in his Test career, as the West Indies collapsed from their overnight total of 276 for six to be bundled out inside the first hour of play in the morning. When South Africa came into to bat, Dean Elgar fell for eight in the final over before lunch, lbw to Holder as the Proteas lost their first wicket on 48. – Sapa