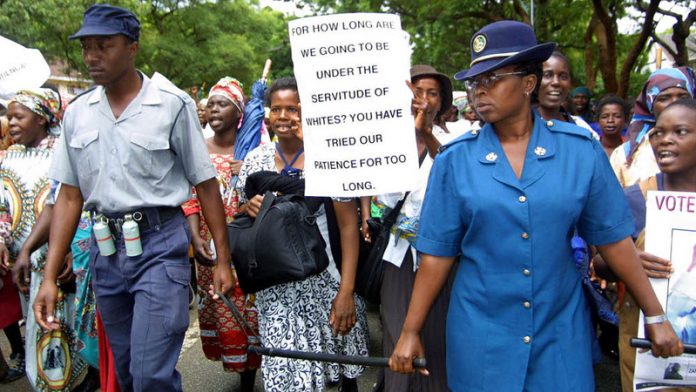 Poor governance, endemic corruption and self-enrichment at the expense of the poor black masses by South African and African ruling parties, governments and leaders spawn a perpetual cycle of racism against blacks.

Centuries of colonialism, slavery and apartheid have left an entrenched legacy of institutional racism across the globe, whereby darker-skinned people are often instinctively prejudiced in societies and invariably suffer from lack of social, political and economic power.

This happens in the industrial countries – former colonial powers with histories of slavery – where these discriminatory systems were formally in place in the past.

Barack and Michelle Obama, president and first lady of the United States, recently recalled in a joint interview with People magazine how, before becoming the most powerful couple in the US, they had suffered their share of prejudice. Once, while Obama waited outside a restaurant after dinner, he was handed a set of car keys by a fellow patron, who assumed that he was the parking attendant.

Institutional racism also remains in many developing countries, which experienced colonialism and where indigenous communities were colonised by settler communities from colonial powers and slavery was practised.

Brazil and Bolivia are cases in point, where gradients of colour – with black people at the bottom and white people at the top – often determine political, economic and social power, opportunities and privileges.

But institutional racism also exists in developing countries with ancient cultures, such as India, where some communities were seen as lower castes. In spite of redress measures and antidiscrimination legislation, formerly lower-caste communities often experience continued day-to-day prejudice in these societies.

Racism is also endemic in global relations between nations: those seen as white are invariably higher in the pecking order than black or coloured ones. For example, since independence from colonialism and white-minority regimes, many developing and African countries have, in the context of the global order, suffered from an inequality of power compared with their former colonisers and industrial nations.

Black, brown and indigenous cultures’ perspectives and norms often also have different nuances and emphases. Because of global and institutional racism, these cultures are often not recognised as the “norm” or “equal” and are, at best, seen as “exotic”.

In the phenomenon described by an American feminist and anti-racism activist, Peggy McIntosh, as “white privilege”, “white” countries and individuals are socialised with the implacable assumption that their view of the world, social understanding and ways of looking is the “normal”.

This is also replicated in global institutions, companies and international culture – whether in films or thought, quality universities or global media.

Those from countries of people of darker colour, or who are black or indigenous in countries where white privilege dominates, have to make the adaption to “whiteness” or play by “white” rules.

Instructively, Assata Shakur left the Black Panther Party because leader Huey Newton used the fight against racism to create a leadership based on himself as the ‘Supreme Commander’ who did not brook internal criticism.

Many wrongly argue that poor African countries and poor blacks in rich “white” countries are in their predicament because they are somehow lesser countries and individuals.

One danger is that institutional racism at global and country levels can plunge black people into perpetual victimhood, never taking accountability for their own individual failures or those of the countries they live in, forever blaming racism, apartheid and colonialism and, therefore, not being able to take active control of their own individual and country’s destinies.

In fact, since African independence after World War II, many African governments and leaders have used global racism, imperialism and the continued legacy of colonialism to cover up for their own incompetence.

A case in point is the way some black people rally behind Zimbabwe’s Robert Mugabe and the ruling Zanu-PF because of their “blackness”, their shared victimhood of racial oppression and the crippling impact of colonialism on their development.

But they ignore Zanu-PF’s terrifying oppression of ordinary black Zimbabweans, let alone its looting of their country while the citizens starve.

Similarly, there is often the temptation for black people to hide behind racial solidarity to support undemocratic practices by black leaders or organisations, merely because they are black and publicly condemn global white privilege.

Assata Shakur left the Black Panther Party in the US because its leader, Huey Newton, used the fight against racism to create a leadership centred on himself. Newton called himself the “Supreme Commander”, was sexist and discouraged internal criticism.

What we should not do in our bid to debunk outrageous racial generalisations, “white privilege” and racial inequalities is to defend individual incompetence, wrongdoing and even corruption just because the person is black. The argument being that because he or she, or a predominantly black government, is “one of us”, other blacks should publicly rally behind them, even if they are corrupt and incompetent.

We should not hide behind racial solidarity to support undemocratic practices. For example, should the appointment of a black judge be applauded just because he or she is black? In many rape judgments in South Africa, many black judges’ values were as conservative as some of their white colleagues.

In South Africa, many black and white judges and magistrates still astonishingly blame the victims of rape for being responsible for their plight. Surely, in such cases as these, a black magistrate or judge cannot be supported merely on the basis of his or her blackness, even if their judgments are blatantly against the letter and spirit of the Constitution.

To deal decisively with racism, we must also be able to point out when an unskilled or inexperienced black person is put in a position where they are not performing, rather than keep silent, because at least “he or she is black”.

Black politicians in South Africa often call for affirmative action and black economic empowerment only to enrich themselves, which paradoxically strengthens racism and the defence of “white privilege”.

Figures from the department of trade and industry show that R500-billion was transferred to a few black individuals between 1994 and 2005, whereas millions of other blacks are mired in desperate poverty.

Yet some black people astonishingly applaud such black economic empowerment deals, which make a few black individuals, who are politically well connected, rich – because they are at least “black”.

Similarly, to defend President Jacob Zuma’s R280-million Nkandla compound, built with taxpayers’ money, while most black South Africans, who voted for the ANC, are struggling to make ends meet is just being silly.

Shouting “racism” to sideline rivals for self-enrichment at the expense of the public good or to deflect attention from black wrongdoing is simply wrong.

To slay the racism dragon demands more honest politics from black leaders, less opportunism in using the race card for self-enrichment and more ethical behaviour. African leaders and governments must govern in the interest of all, rather than a small elite, whether it is their “ethnic” group, region, political faction or party.

Black communities and countries need to hold leaders more accountable for their actions.

Cornel West, a noted American scholar on race, rightly argues that we must “replace racial reasoning with moral reasoning, to understand the black freedom struggle not as an affair of skin pigmentation and racial phenotype but rather as a matter of ethical principles and wise politics”.

The challenge for South Africa and Africans is not to embrace leaders because they shout the loudest against racism, the continuing effect of colonialism or imperialism, but then go on to use racism to hide their own incompetence, personal self-enrichment and oppression of their own black people.

Unless we do this, blacks in Africa will forever get the same useless, incompetent and self-interested leaders and governments that will perpetuate a continual cycle of black poverty and underdevelopment, helping to reinforce racism against black people and countries.

This is an edited and adapted extract from the introduction to the new edition of the autobiography of Assata Shakur, Assata: The FBI’s Most Wanted Woman, published by Best Read, an imprint of HSRC Press, this month. William Gumede is the chairperson of the Democracy Works Foundation and the author of, among others, Restless Nation: Making Sense of Troubled Times (Tafelberg).

Although Africans must continue to support the Black Lives Matter movement, there is also the need for them to raise their voices against injustices in other African countries
Read more
Advertising
Continue to the category
Coronavirus