I am Charlie Hebdo, just like I am everyone 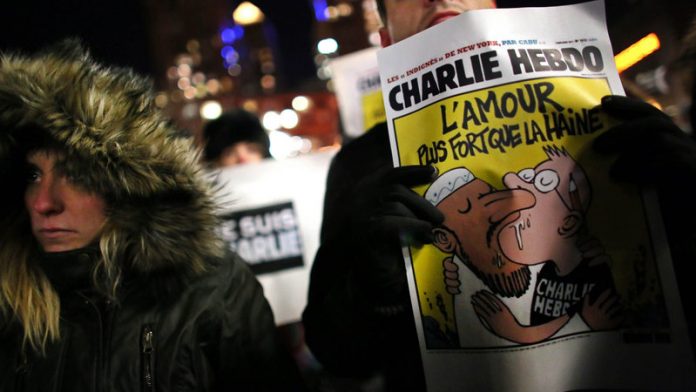 When atrocious events like the Charlie Hebdo massacre occur, when the word terrorism is thrown around by the media, when headlines containing the words “extremism” and “barbaric acts” are hung on lampposts and read by passers-by, three groups of people develop or, rather, become more visible.

One group thinks critically about it.

They consider the context of the cartoons published by Charlie Hebdo, who is responsible for drawing and publishing them. The tradition of satire, its point.

They consider the effects and the meaning of such atrocities on things such as freedom of speech and press freedom, they try to think about it in an analytical way and to process the aftermath.

They know, to an extent, about how the world works, how the media works, how to read between the lines and how to think about it all in as close to a balanced way as possible.

But this is a very small group.

Media responsibility
There’s also a group who will buy into the often one-sided portrayal of these events in the media. I am not saying that this is always the case.

Publications do make allowances for a view, or angle, that is less “popular”, more balanced or objective. But let’s not forget that “history belongs to those who write it”.

Just like Charlie Hebdo’s white editor who once declared that the Prophet Muhammad means nothing to him and so he finds no reason to “protect” him, or the idea of him, so too do many media organisations lean toward the views and kinds of reporting that fit ­comfortably within their own belief systems.

Let’s not kid ourselves, this does happen. Even if they don’t like it, the end game is to beat other papers, and sell more of their own.

Sometimes there is a right way of doing this with the right message – the fair and balanced one.

Often there is not.

Often it is because something that has already gained popularity and worked elsewhere has now bled into the belly of the media and so it must be portrayed that way.

This is not without its consequences.

The Charlie Hebdo killings and the effect it has on Islamophobia and the face of terrorism is not only Paris’ and France’s problem … it is ours too because we live among the group ready to pounce on these stereotypes and events to prove their point.

The killings breed hatred and are based on a lack of understanding and ignorance.

They thrive on expecting an apology from someone they have grouped under the same blanket as this act, just because they are part of the same religion.

Does the media contribute to this? Maybe.

Should we censor ourselves and not report on it? No.

Should we ­realise that we serve to educate an audience instead of riling them up, whether it is through the use of satirical cartoons, as Charlie Hebdo has done, because we reserve the right to be a free press but must also consider that this comes with the freedom of responsibility as well? In my opinion, yes, definitely.

Targeted prejudice
We must start to take some responsibility for the third group.

The group who is waiting, with bated breath, to read the next headline written to increase sales, to see a name reflected that maybe resembles that of their brother or mother or uncle.

A name that not only identifies the way they are called, but which religion they belong to, what the media has indicated are their values, and how they should expect they will be perceived by the public.

Again, this is not a universal truth – not all publications do this.

The US never has to apologise for its heinous acts.

There is no trend on social media created by US civilians who need to defend themselves from castigation every time superior technology is used to bomb schools in the Middle East.

But in many ­corners of Europe – and undoubtedly in South Africa’s troubled society – Muslim people are preparing their defences.

They are distancing themselves from the word “terrorism” they are trying to find ways to convince people that they are not all like that.

They are pondering endlessly about the kinds of insults they will have to face, how they will be categorised, how many ways they can prove that violence, terrorism and fundamentalism are not fields in which only brown people play.

They are thinking twice about that overseas trip because of the name on their passport and how they might be treated because of it.

With freedom comes responsibility
I am any one of these three people on a daily basis.

No, I do not condone the killing of human beings, not for satire, not for anything.

But I am the critical thinker, the idealist and the click baiter.

If we in the media are all Charlie Hebdo because we are all people who do not stand for a press or speech that is oppressed, then we must be everyone else who is going to be oppressed.

I do not want this to read like one of those articles or columns that comes to the defence of Islam, or Muslims, or any religion at all.

But the truth is that no matter how hard I try, that is exactly how it’s going to come across. Because that is the world we live in.

It is okay for Charlie Hebdo to be satirical about any religion.

It is not okay for the fundamentalists of any religion to declare themselves superior and above the realms of critique, offence, satire and introspection.

It is definitely not okay to convey this irresponsibly and with disregard of the audience who will receive it.