Editorial: Let us all be Charlie 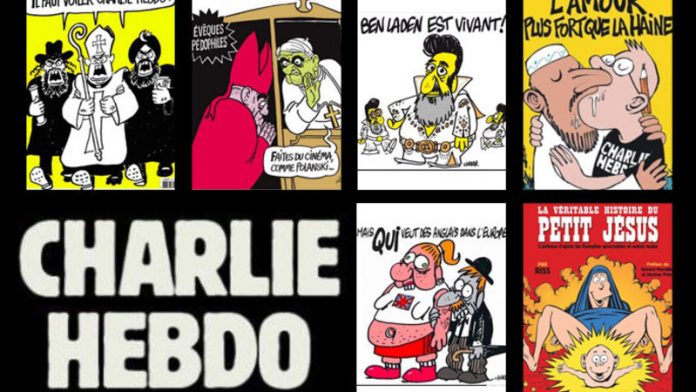 Today at 4pm a global coalition of publications and organisations publishes cartoons, covers and writing from the satirical magazine Charlie Hebdo as a signal of solidarity with the French publication, which came under such deadly attack on Wednesday.

The joint action also underlines the commitment of authors and journalists around the world to state their commitment to freedom of expression and its vital importance.

Those involved include the Mail & Guardian, the Guardian in the UK, , Brazilian daily Folha de Sao Paolo, the City Press as well as the Comic Book Legal Defense Fund, freeDimensional, Index on Censorship, PEN America, Reporters Without Borders and English PEN. They will be part of a moment around the world when people from many nations speak up for the fundamental right to freedom of expression and what it stands for. And to show #solidarity.

M&G Editorial: Only a rebellion of courage will strangle extremism

The goals of terrorism – if we were to dignify utter insanity with having aims – are fear and polarisation. And over the past decade and a half, terrorists, especially those with the temerity to associate themselves with Islam, have met with some success on those fronts.

The fear was encoded into security protocols, the polarisation evident in pulpit rhetoric.

By their metrics, at least, the terrorists were winning.

For a time, that victory obscured what we should have seen writ large in human history: all tyrants must die, even the tyranny of terror. And perhaps the time of its passing is now.

On Wednesday Paris did not cower; it rose up.

People gathered not only to mourn those who had been killed in the offices of Charlie Hebdo, but to show their defiance.

“You cannot take our liberty,” they said, and the saying made it so.

Like ripples in a pond it spread, sped up by social media: a rebellion of courage.

When a lone attacker laid siege to a café in Sydney in mid-December it should, by rights, have strengthened the hands of those who couch their xenophobia in economic terms or spout nonsense about a clash of civilisations.

Instead, Australians reached out to one another.

“Not in our name,” said Muslims. “Nor in ours,” said Christians, who offered themselves as human shields against thoughtless reprisals. Solidarity ran riot.

Extremists have proven, in recent years, that they cannot be defeated by arms or vigilance, or by turning their own methods against them.

But in the past month Sydney and Paris have proven that they can be defeated by the resilience of the human spirit.

Perhaps these examples will give fresh hope to Kenyans, Nigerians and others around the world who face these perils.

Je suis Charlie. Let us all be Charlie.