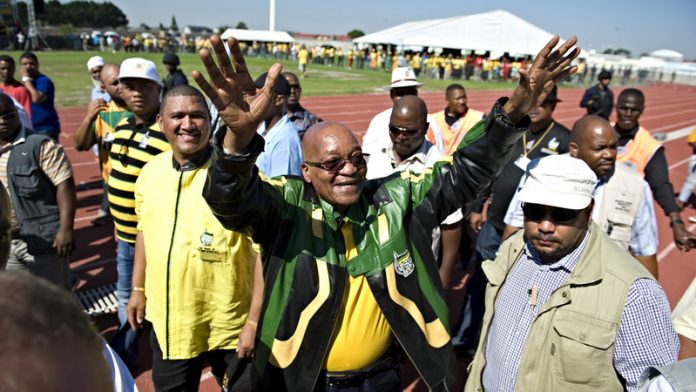 Shopping came to a complete standstill at the Mitchell’s Plain Promenade Mall this afternoon when President Jacob Zuma and hundreds of supporters brandishing flags and handing out pamphlets walked through the centre singing “happy birthday ANC”.

Baffled shoppers crowded the doors and abandoned trollies in their rush to catch a glimpse of the president, who stopped at different storefronts to greet and shake hands with residents in the DA-led coloured community.

Supporters of all races, some in ANC t-shirts, joined in the festivities and sang along to the birthday and struggle songs while trying to take pictures of the president.

For the first time since he started knocking on doors and visiting townships in the build-up to the party’s birthday celebrations this weekend, the president did not address the people of Mitchell’s Plain and, instead, walked through the mall and straight to his waiting motorcade, where he took off his cap to wave at the hundreds of people gathered, before going off to the next event.

The residents, however, said they appreciated the fact that he had included them in his campaign this week, and would take his visit as an invitation to the party’s anniversary festivities on Saturday.

Shameema Fritz (45) said it was an amazing and rare sight to see any leader walking through their malls in Mitchell’s Plain.

“It’s the first time Zuma has visited our streets and even though it was just a walkabout, we appreciate his presence. I know he is the president of the country and is very busy and cannot be everywhere at once. It is a good thing that he has shown us that we are also part of the ANC’s plan. We really hope they can take over and show us what they can do in the Western Cape.”

Nomapaseka Rakaibe (34) on the other hand, said she was sceptical of the promises of change that the party had been spreading while mobilising support for the celebrations.

“They always make us promises they know they can’t keep. That is why people are losing hope now in the Western Cape. But if they work hard at addressing the issues we face, they have a good chance of getting Mitchell’s Plain back.” she said.

“Vote for the ANC, then go back to your party when you are done”
The mall was Zuma’s second stop of the day, after a visit to Langa’s taxi rank, where he had residents in stitches as he mocked the staying power of political parties in the country.

“The ANC celebrates 103 years of existence today, while lots of other parties have come and gone, we are still standing. The other parties are like a fire created using papers, which burns fast and fades fast. We are here to stay, and we are going to be here until that man comes,” he said, referring to earlier statements where he had said the party would rule until Jesus came back.

He also told Langa residents not to be afraid of voting for the ANC, even if they were card-carrying members of other political parties.

“You can vote for the ANC, then go back to your party when you are done.” the president said.

He also gave a small lecture on the history of the party, and urged black people not to forget it.

He sang and danced for the supporters, who couldn’t get enough of his signature song Mshini Wam.

Langa resident Nomvula Kupe (80), who was one of the first to be greeted by Zuma in the area, said she had gained energy from his handshake.

“I always see him on TV and in papers, but have never seen him. When I heard he was coming, I quickly dressed and rushed here, because I didn’t want to miss this opportunity. I feel blessed,” the wheelchair-bound pensioner said.

The president finished off his campaign with a mini rally in Khayelitsha, where he urged residents to help the party paint Cape Town yellow on Saturday for the ANC’s birthday celebrations from 6am.

At the same time, Deputy President Cyril Ramaphosa held a mini rally in the Embekweni Township, after a two hour long door-to-door campaign in the Kayamnandi Township in Stellenbosch.