SA’s first people demand their place in the sun 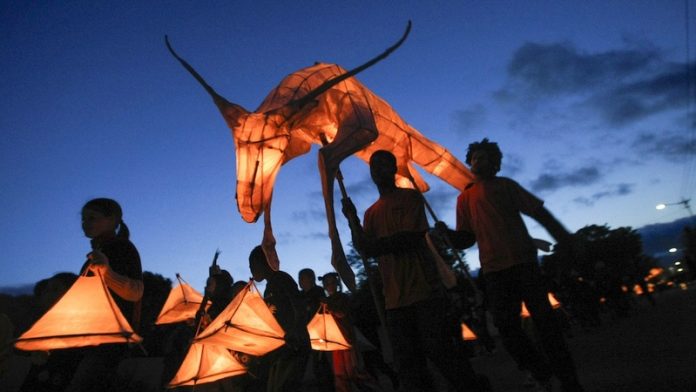 Once upon a time, according to the generally accepted narrative of our history, different groups of tribes started arriving in the southern part of Africa from far beyond the Limpopo River. They were black or, to use the language of the ANC, African. Finding the place uninhabited, they settled here.

Much later other people arrived from Europe. They were white and settled in the Cape. The whites conquered the land and, as they were to claim, brought civilisation and progress to the land that was to become the Republic of South Africa.

The whites, later to call themselves Afrikaners, pushed into the interior. In their drive to imprint their will on the land, they fought bloody battles against the African tribes. Superior weapons won the country for the whites or Afrikaners. They were to lose this supremacy to the British but eventually ruled the country. Their legacy to South Africa was the policy of apartheid, which in essence said white minority rule was okay.

In 1990 the ruling National Party (NP) freed Nelson Mandela and began negotiating with groups that had taken up arms and resisted their policy of apartheid. Four years later a new democratic country was born.

Much of the credit for the new country was owed to the heroic liberation struggle waged by the ANC.

This rather overused narrative sounds so romantic and reeks of mythical bravery. That’s the problem: fact has made way for convenient myths and fiction that both sets of conquerors, those from the north of the Limpopo and those from Europe, used to justify their conquest of this beautiful land of my forefathers.

On arrival in South Africa, Africans and whites found the first people, the Khoisan. They were conquered. With the loss of their lands came another handy lie: the one that claimed the first people died without leaving any descendants. This lie made it easier for those who had driven the Khoisan off their lands and enslaved them to claim they were the real owners of South Africa.

Another handy lie was that diseases brought to Khoisan land by the white colonists had wiped them out. Not entirely true.

People like me are proof of that. My roots are in Boesmanskloof in the Overberg. My tribe is the Hessequa. I’m Khoisan. I’m African. I’m part of the first people. My forefathers were the first freedom fighters. They fought – and at times conquered – the Portuguese in what today is Mossel Bay and Table Bay.

Indeed, the freedom struggle did not begin when the ANC was formed. Yet, as author and journalist Max du Preez pointed out in a recent column, official history is silent about the resistance of the first people.

History gushes about the African resistance. This is not surprising because those who invade, conquer and dispossess must write their own history to justify their myths. The NP did it; the ANC is following suit.

Lots of myths will be sold during the ANC’s 103rd birthday celebrations in Cape Town this week. Certainly, not much will be said about the first people and their descendants. According to the ANC’s undisguised policy of race discrimination, they are regarded as coloured – and not African. Now they have to endure a policy that talks about addressing the disadvantages suffered by African people in particular.

Of course, this is another way of saying Africans first. Nothing in this self-centred ideology mentions undoing the dispossession, rejection and alienation of the first people. One has grown tired of racist accusations that the Western Cape is not African enough. Decoded, this type of message says: forget it if you are of a brown hue, you are not African, even if you are in the majority in that province.

When President Jacob Zuma addresses the nation on behalf of his party, he will tell us how wonderfully we’re doing. He might even flick a few bones from his table in the direction of the coloured people.

The time of eating from the new African political master’s table is past. The misery, hopelessness, self-destruction and other social ills so prevalent among indigenous communities worldwide charge that we stand up and demand to be recognised and treated as the first people.

Mere representation in the House of Traditional Leaders is not enough because it equates us with other tribes and robs us of our distinction as the first people. We are not a disgrace to be avoided, shamed and humiliated: we are the first people.

In 1985 anti-apartheid cleric Allan Boesak, speaking at the launch of the United Democratic Front, bluntly told PW Botha: “We want all of our rights, we want them here and we want them now.”

Boesak was talking about a nonracial society. Freedom and liberation did come (for some). Who can blame those who say that the lands of their forefathers are still under occupation, this time not by whites, but by Africans, their erstwhile comrades in the liberation struggle?

It’s true that some of those now called coloured by the ANC, and the NP before them, have embraced this racial stigmatisation. But their adoption of this identity does not destroy their heritage. There are also those who are proud of their heritage as the indigenous people.

For coloured people, mostly, the future for their children is bleak, filled with fears about affirmative action, discrimination, acute poverty, drug abuse, gangsterism and prison cells that are teeming with their men and women.

They want a different life. The hypocrisy and meaningless promises from the ANC, and even the Democratic Alliance, won’t do. Dealing with the real history of the country and the rightful claims of the first people will.

Now, President Zuma, people like me are looking for leadership from you and your party on this burning issue. Or do we have to take matters into our own hands?

Dennis Cruywagen is a former deputy editor of the Pretoria News, an author, political commentator and the recipient of two fellowships to Harvard University