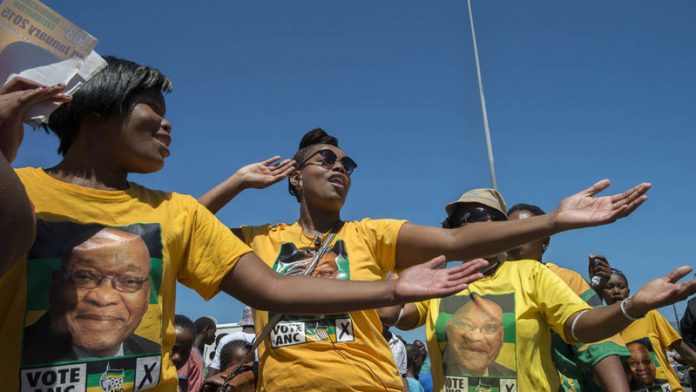 From face painted minstrels to hundreds of Apostle Church members in white and green, thousands of ANC supporters are gathered at the Cape Town stadium to celebrate the party’s 103rd birthday.

With some toting Vuvuzela’s and whistles, the ANC supporters have been steadily streaming into the stadium since 7am, singing struggle songs and dancing as they waited for the official programme to start.

Businesses also took the opportunity to sell caps, umbrellas and various party merchandise outside the venue. Having made use of the 1 000 taxis, 800 buses and trains provided to transport people from the townships and other areas of the city, the supporters have brought their whole families in preparation of spending the day at the event.

Dunyiswa Teta (54), who travelled from Port Elizabeth and arrived early this morning, said she could not miss the party as it was a way to celebrate the ANC as well as the freedom people enjoyed. “I’m really excited about being here. We basically got on a bus, travelled here and came straight to the stadium. No sleep, or showers.

“It is a great time for the ANC, a time when they can host a party in a city they don’t govern and do it well. This is the only way the people of the Western Cape can feel included and actually see what the party has to offer. This should be fun.”

Tourists
A group of tourists from Denmark decided to make the party a part of their learning experience in South Africa. The group of four social work interns, who have been in South Africa for a little over six months, said they had found out about the ANC party when they called a tourism agency hoping to get a guided tour of the stadiums.

Charlotte Lund (25) said they could not miss the opportunity to observe the ruling party in action. “We don’t know much about the politics of this country, but we do know that the ANC is the ruling party and we wanted to see what it’s all about. When we found out we couldn’t tour the stadium, it was either we go home or join the biggest party we have seen in a while. So we decided to come here and enjoy the culture.”

Lene Holm (38), said it was amazing to see so many different cultures interacting. “It is an amazing vibe and we want to experience every bit of it.” Anele Matiso (26), from Khayelitsha township in Cape Town, said he was honoured to be part of the celebrations. “This party restored our dignity and has been a part of our history. I could not miss this party, especially since it has come to us.”

David Matthews (66), from Paarl just outside Cape Town, said he saw the ANC as a friend and had to come to wish the party a happy birthday. Dorcas Molefe (60), from Potchefstoom and her group of five friends had travelled for two days to get to the party. “We have been on the road for around 36 hours and am so glad we got here on time. It is one of those can’t miss events. When we heard that there would be a bus travelling to Cape Town, we quickly gathered out things and hopped on. And the event is great so far,” she said, dressed in full ANC Women’s League regalia.

The event started with a performance from drummers Masupatsila, before the Cape Minstrels took a turn around the stadium.

President Jacob Zuma, alongside deputy Cryil Ramaphosa and several ministers, also did a walkabout around the stadium before the official programme was opened with a prayer.  The event is set to continue until after 4pm.

ANC superfans are so vested in a romantic vision of a political party with a great past that they struggle to accept the realities of what this party has become.
Read more
Coronavirus

As Gauteng braces itself for its Covid-19 peak, the provincial government says it is knuckling down to deal with ‘shameful’ corruption allegations
Read more
Advertising
Continue to the category
Coronavirus