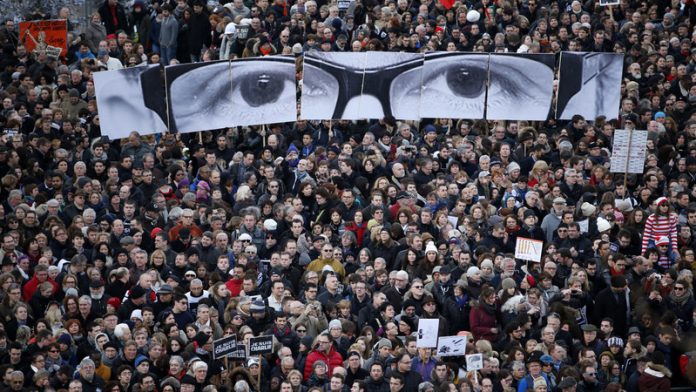 Israeli Prime Minister Benjamin Netanyahu and Palestinian president Mahmoud Abbas had their closest encounter in years on Sunday when they joined world leaders in a historic march against terrorism in Paris.

On a day that was already heavy with symbolism, one of the most remarkable scenes was that of the two nemeses walking on the front line of the unity rally, with just four dignitaries standing between them.

They were among dozens of foreign representatives who had jetted into the French capital at short notice to take part in an unprecedented show of solidarity after 17 people were killed in Islamist attacks in France this week, including several journalists and cartoonists.

Media watchdog Reporters Without Borders was heavily critical of some of the dignitaries attending the march – including Turkish Prime Minister Ahmet Davutoglu and Egyptian Foreign Minister Sameh Shoukry – accusing them of restricting media freedoms in their own countries.

As the heads of state and government kicked off the march, it had been a long time since Netanyahu and Abbas had been in such close proximity.

With the Middle East peace talks deadlocked, the last face-to-face meeting between Netanyahu and Abbas dates back to some four years ago. No such meeting was expected of them Sunday.

They were not the only foes to brush shoulders in Paris. Also present were Ukrainian President Petro Poroshenko and Russian Foreign Minister Sergei Lavrov, whose countries are engaged in a violent struggle in Ukraine.

‘Predators of press freedom’
“Paris is the capital of the world today,” said Hollande ahead of the unity march, which also brought crowds onto the streets across Europe and the Middle East.

Before he set off for the Paris march, Britain’s David Cameron said: “We in Britain face a very similar threat, a threat of fanatical extremism.

The procession was organised in record time following a three-day jihadist killing spree that began on Wednesday when two gunmen mowed down 12 people at the Paris office of satirical weekly Charlie Hebdo, a target of repeated threats over its cartoons mocking the Prophet Mohammed.

A third attacker shot dead a policewoman on Thursday and took hostages in a Jewish supermarket a day later, killing four of them.

All three gunmen were eventually shot dead by security forces.

Many of the millions of people taking part in the rallies on Sunday held up pens and signs with the words “Je Suis Charlie” in support of freedom of expression.

Reporters Without Borders said it was “outraged” by some foreign dignitaries showing solidarity in Paris while cracking down on freedom of expression in their own countries.

The group singled out Egypt, Russia, Turkey and the United Arab Emirates for criticism, accusing them of systematically persecuting journalists and bloggers.

“On what grounds are representatives of regimes that are predators of press freedom coming to Paris to pay tribute to Charlie Hebdo, a publication that has always defended the most radical concept of freedom of expression?” it said in a statement.