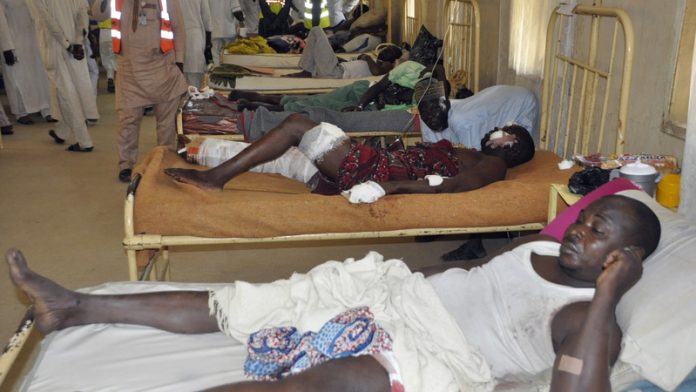 Four people were killed in suicide attacks by two female bombers on Sunday in the latest deadly violence in northeast Nigeria after the military appealed for support to help fight Boko Haram.

The two women targeted a crowded market in Potiskum, Yobe State, a day after 19 people were killed in a similar attack in neighbouring Borno State, by a girl thought to be aged just 10.

Potiskum – a repeated target for the militants – was also hit on Saturday, when a car exploded outside a police station, killing the driver and an officer.

The three explosions followed what is thought to be the worst attack in the bloody six-year insurgency, when Boko Haram fighters attacked the Borno town of Baga and razed at least 16 surrounding settlements.

Nigeria’s military said descriptions of the January 3 strike on the fishing hub as “the deadliest” in a rebellion that has claimed more than 13 000 lives since 2009 were “quite valid”.

“The attack on the town by the bloodhounds and their activities since January 3 2015, should convince well-meaning people all over the world that Boko Haram is the evil all must collaborate to end, rather than vilifying those working to check them,” said defence spokesperson Chris Olukolade.

‘This cannot go on’
Nigeria’s military – west Africa’s largest – has faced repeated criticism for failing to end the Islamist insurgency, as well as allegations of human rights abuses.

Soldiers have complained of a lack of adequate weapons and even refused to deploy to take on the better-armed rebels.

In Baga, 14 soldiers were killed, Olukolade said, but independent corroboration of the huge numbers of dead cited locally has so far been impossible to obtain.

The UN children’s fund said harrowing reports from survivors of the attack and the use of a 10-year-old girl as a human bomb in Borno state capital Maiduguri “should be searing the conscience of the world”.

“Words alone can neither express our outrage nor ease the agony of all those suffering from the constant violence in northern Nigeria,” UNICEF executive director Anthony Lake said in a statement.

“But these images of recent days and all they imply for the future of Nigeria should galvanise effective action. For this cannot go on.”

Boko Haram, which has been fighting to create a hardline Islamic state in northeast Nigeria, has in the last six months seized dozens of towns and villages in the remote region, seemingly at will.

The land grab, which has raised fears in Nigeria’s neighbours Niger, Chad and Cameroon, began soon after 276 schoolgirls were abducted from the Borno town of Chibok in mid-April.

Nine months on, 219 are still being held.

But although mass casualty attacks are not new – nearly 200 people died in Baga in 2013 – the scale, severity and frequency of the group’s assaults appears to be increasing.

On Friday, Boko Haram fought running battles with the military in the Yobe state capital, Damaturu.

Spike in violence
Security analysts have said more attacks were to be expected, as Nigerians go to the polls next month and the insurgents are looking to further undermine the legitimacy of the vote and the secular government.

Nigeria’s main opposition has already said that the overall result of the February 14 poll could be invalidated because tens of thousands of displaced people in the northeast will not be able to vote.

Boko Haram’s use of female suicide bombers, however, is a relatively new tactic.

Experts believe that older women may willingly become human bombs as they share the Islamists’ radical ideology or are out to avenge the death of loved ones at the hands of the military.

But the young ages of some – such as the girl in Maiduguri – and the actions of a 15-year-old who was one of Sunday’s bombers in Potiskum, strongly suggest coercion.

A civilian vigilante who witnessed the Maiduguri bombing said of the girl: “I doubt if she actually knew what was strapped to her body.”

Another eye-witness said it appeared that the bomb was remote-controlled, which chimes with testimony from other attacks across the wider north of Nigeria.

In Potiskum, a security official involved in the rescue operation said: “The second bomber was terrified by the explosion and she tried to dash across the road but she also exploded.” – AFP