ANC fights for the rights of all Africans 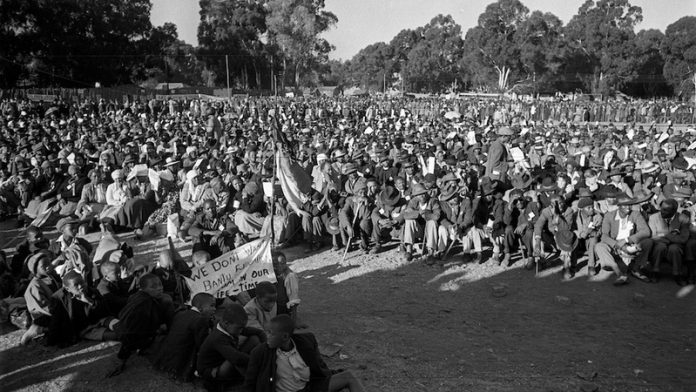 In the history of the liberation struggle of the dispossessed, oppressed people in South Africa, there were various turning points that changed the character of the fight against the oppressors. The 1955 Kliptown Congress of the People was one such occasion that marked significant change in the struggle: it first prioritised the unity of the oppressed people, particularly black people. It further agreed on the common shared destiny of oppressed people and also amplified the inclusiveness that the outcomes of the struggle should achieve.

The Congress of the People that adopted the Freedom Charter was, and remains, the apex of the struggle that underpins the ANC policy of nonracialism and the shared common destiny of South Africa’s people. The different racial groups made it known who their common enemy was – racial segregation (apartheid) and dispossession. They further agreed and communicated their interests for unity with purpose through common interest for a peaceful democratic South Africa, where all would enjoy franchise.

The 1994 edifice is premised on many such breakthroughs by Africans while engaged in the struggle for freedom, including the birth of the ANC in 1912.

Dennis Cruywagen’s article, (SA’s first people demand their place in the sun) misses some of these breakthroughs while distorting others. The formation of the ANC in 1912 was one such major breakthrough; it united struggles waged by various racial groupings: Indians, coloureds, Africans and progressive whites. Most importantly, the ANC’s formation is the highlight of the admission of the origin of South Africa’s oppressed black people that they were Africans. Thus Cruywagen’s notion of “first people” was rebutted in 1912 and buried in 1955.

The outcomes of the struggle were never a disputed variable as Cruywagen seems to imply. It was clear from the beginning, and it was recorded as such, that the aims of the ANC would be: “The creation of the united, nonracial, nonsexist, democratic society … the liberation of the Africans in particular, and black people in general from political and economic bondage.” The backdrop of these aims and objectives was the agreement that the oppressed classes were of African origin and black in pigmentation.

The complexity of the nature of these agreements and actions of our forefathers and founding fathers of the liberation movement seems to have eluded Cruywagen and he further confuses himself and thus his argument: he admits he’s African, yet he disputes the common destiny of Africans and seeks a separate destiny for the Khoisan.

This is no different to the demand by the vanquished Afrikaners, who waged a protracted struggle for a volkstaat (a people’s state) and refused to be part of the shared common vision as agreed and orchestrated by the forefathers of the struggle for liberation of the people of South Africa.

History relegates those who resist change to oblivion. The verligte (enlightened) Afrikaners survived the crushing wheel of change but the verkrampte (conservative) Afrikaners struggle with political dustbins eager to consume them. These developments can easily be noted within the current political players. Many liberal Afrikaners were absorbed by the Democratic Alliance whereas the right-wingers were absorbed by the smaller organisations such as the Freedom Front Plus. The progressive Afrikaners joined the democratic movement, the ANC, and continue to play a meaningful role in the new democratic dispensation.

The ANC continues to undo the consequences of colonialism and dispossession while it promotes the vision of inclusiveness. The ANC’s 103rd birthday celebration, which revealed the main theme for 2015 through the statement delivered by President Jacob Zuma, highlighted the importance of the Freedom Charter as South Africa’s freedom road map.

The founding fathers of the liberation movement, which included the Bushmen, understood very well the strategic outcomes of the struggle and embraced it. Thus flirting with separate development today can be equated to seeking to reverse both the 1955 and the 1994 edifices and would have catastrophic outcomes. They understood the importance of unity in action by the dispossessed African people and the furtherance of the struggle to regain control of their land and their governance.

They understood that Africa belongs to Africans and thus the importance of unity with other Africans in furtherance of the objectives of liberating African people in particular and all the other oppressed black classes in general.

The Freedom Charter thus amplifies those ideals. The people shall govern and all national groups shall have equal rights, and the people shall share in the country’s wealth, reinforcing the notion that all are equal before the law.

Azania Matiwane is a businessman, writer, blogger and social commentator based in Cape Town. He is the chairperson and founder of a civic organisation, the South African Economic Forum, that performs economic policy research and advocacy