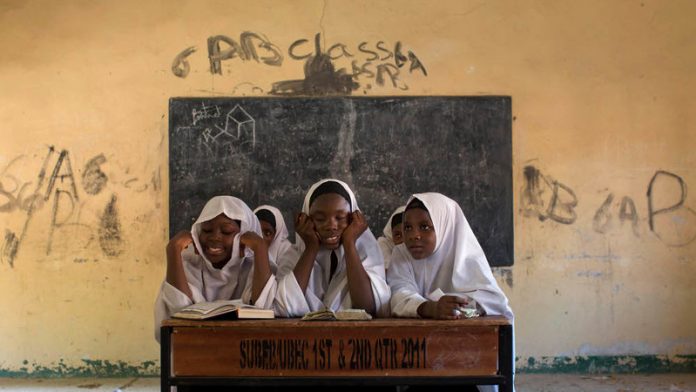 Little is known about the girl, except that she was no more than 10 years old.

With a hijab wrapped around her head and explosives strapped to her tiny frame, she walked into a market in the town of Maiduguri in northeastern Nigeria on Saturday. When the time bomb was detonated remotely, at least 19 people were killed. The little girl’s body was blown into two halves.

Her torn limbs and defeated shadow are the embodiment of an unfathomable war on life in this part of Nigeria. Boko Haram, loosely translated as “Western education is a sin”, continues to wage a vicious war against the Nigerian state.

It has been six years since the current insurgency began and the three hardest hit states of Borno, Yobe and Adamawa are now easily among the most dangerous places on Earth.

The attack in Maiduguri, as pitiless as it may have been, comes days after the group ended an outrageous six-day assault on a series of villages around the fishing town of Baga, close to the border with Chad.

Amnesty International described it as the most brutal operation ever conducted by the group. It certainly is the most devastating incursion in Nigerian history.

For six days, the fighters raided up to 16 human settlements in the area, rounding up victims and executing them indiscriminately. Homes were burned to the ground, 20?000 families were uprooted and between 500 and 2?000 people were butchered.

Here, even in death, human life is barely given the most basic dignity of an accurate statistic. No one seems to know how many were really killed.

One fisherman, Yanaye Greme, said he “kept stepping on bodies” until he reached a neighbouring village, five kilometres away. When he got there, he found the village had been razed to the ground and deserted.

To the outside world, including many Nigerians in the country’s south, Boko Haram is nothing more than a band of militant Islamist caricatures, steeped in bigotry and drunk on their so-called desire for nation-wide sharia law.

To others, the group is just one monster in a valley of thuggery.

What is certain is that, although the group might have once held ambitions to become an alternative apparatus to an absent state administration in the northeast, it has long ceased to be anything but a mockery to human life.

To turn a little girl into a human bomb, a “suicide bomber” as she will be erroneously described, signals a new level of depravity. There is no way she could have understood what had been decided for her.

And although the group’s record is devastating, to say the least, it is the Nigerian government and its military’s equally shocking record in the region that makes the prospect of a solution in the immediate future almost untenable.

In August 2014, Amnesty International researchers gathered video footage of suspected Boko Haram fighters or associates being beaten in public and loaded into trucks, only to be found later by the side of the road with bullets to the head and chest. Other footage showed men having their throats slit and being dumped in mass graves outside villages. “This shocking new evidence is further proof of the appalling crimes being committed with abandon by all sides in the conflict,” Amnesty said.

These findings followed a report by Human Rights Watch in 2013, which described the military as “engaged more in destruction than protection”.

Boko Haram reached notoriety for its kidnapping of more than 200 girls from the town of Chibok in April 2014. Although the abductions prompted outrage worldwide, few knew that the Nigerian military was already involved in similar methods as a tactic in its war against the group. Those seen to be associated with the group, including women and children, were being routinely held for weeks or months on end.

For the world, Chibok was despicable; for Boko Haram, it was just another part of its war.

Nigeria’s military, for its part, is no stranger to heavy-handed tactics; it has a long history of repression and subjugation. Its second experiment with democracy is barely 16 years old. Its operations in the northeast often involve state-sponsored militias, which only furthers hostility and deepens impunity.

With media not allowed to travel to much of the affected region and communication blackouts still existing, the army has operated with little accountability.

To be clear, before Boko Haram drove into Baga last week, its reign of terror had cost at least 13 000 lives. The mismanagement of the crisis has assisted in the uprooting of more than 800 000 people from their homes, forcing them further on to the margins.

This is an election year in Nigeria. And the stakes are high. There is some talk of President Goodluck Jonathan facing stiff competition when the polls are held in February. Under such duress, elections are often meaningless events in the project of democracy; it is difficult to understand how elections involving “big men” chasing power politics involving oil, rising dissent in the Niger Delta and international interference will help to improve the value of life in the northeast.

For instance, on December 30 2014, just hours before a landmark vote at the United Nations Security Council, both Benjamin Netanyahu, the Israeli prime minister, and John Kerry, the United States secretary of state, called Jonathan and urged him not to support Palestine in its bid for statehood. Nigeria was widely expected to support the bid, but the late call convinced its leader otherwise.

With just two months before a crucial election and with Nigeria vying hard for a permanent spot on the security council, who knows what promises were made to him?

All of this doesn’t matter, for these convoluted knots surely cannot be hidden forever. Except the story of the little girl, whose name we are never likely to learn.

Azad Essa is a journalist at Al Jazeera and the author of Zuma’s Bastard: Encounters with a Desktop Terrorist. This article was first published in Kindle magazine