Charlie Hebdo sticks to its pencils 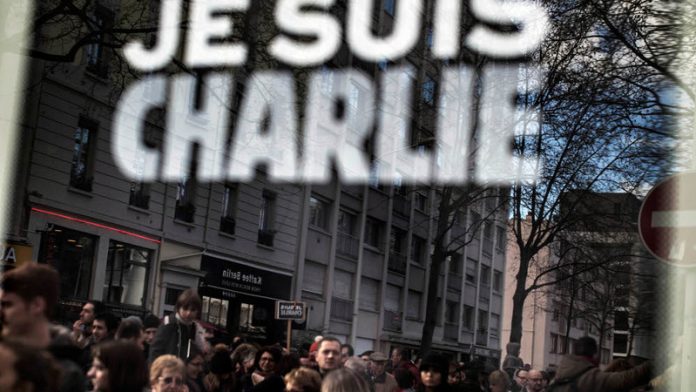 A week after the killing of eight of its journalists, Charlie Hebdo staff have published a “survival issue” of the French satirical magazine that adds poignancy to its usual irreverence and vulgar sense of humour.

But the edition, kept to the usual 16 pages, is otherwise classic Charlie: from the front cover by surviving cartoonist Luz that portrays the Prophet Muhammad – one of its favourite satirical targets in recent years – and throughout the edition, which is peppered with its typically cheeky and ribald drawings.

Nobody is sacred: they mock figures from Sister Emmanuelle to the pope, Angela Merkel and Madonna, and take comic revenge over the jihadis who burst into their offices last week. Three of them are shown plotting in typically Muslim garb; one says: “We mustn’t touch the people from Charlie Hebdo.” The reply is: “If we do, they’ll become martyrs and once they get to paradise they’ll steal all our virgins.”

The gunmen killed 12 people in and around the magazine offices on Wednesday January 7 .

The special edition has a centre spread of cartoons devoted to the turbulent events of the past few days. “Sunday 11th January, more people for ‘ Charlie‘ than for mass,” the headline says across two pages, which thanks people for their support and solidarity by turning out for a unity march that attracted more than four million people across France.

A drawing of the Arc de Triomphe is emblazoned with the words “Paris is Charlie”. Underneath, the flame in honour of the unknown soldier has a speech bubble saying: “I’ve got an erection.”

One cartoon strip features Charlie‘s regular “shrink” columnist, Elsa Cayat, with a terrorist on her couch telling her: “I had a dream that I was killing Charlie Hebdo.” The psychiatrist seeks a deeper meaning when the terrorist says: “I didn’t kill the dog. There was a dog in the office. A cocker spaniel with long hair and big ears.” She replies: “And so you had a vision of your mother’s sexual organs, right?”

The paper has published a column under Cayat’s name, and the late editor Stéphane Charbonnier makes a passing appearance, saying: “I am everywhere and nowhere.” It also contains a moving piece by the weekly’s regular “emergency” columnist, Patrick Pelloux, a doctor still reeling from the sight of his dying colleagues, whom he was unable to save.

The paper’s editorial by Gérard Biard, the chief editor, who was on holiday in London when the attack occurred, demonstrates that despite the tragedy the journalists have not lost their sense of humour.

Charlie, “an atheist paper, is accomplishing more miracles than all the saints and prophets together”, he says, adding that all the staff had a good laugh when the bells of Notre Dame pealed in memory of the dead during a nationwide minute’s silence.

“We want to send a message to Pope Francis, who also ‘is Charlie‘ this week: we will only accept the Notre Dame bells pealing in our honour if the Femen [the feminist protest group founded in Ukraine] are allowed to ring them.”

Deaths in vain
On a serious note, Biard says he fears that his colleagues’ deaths, which prompted such a global outpouring, may have been in vain. Already on the internet, he says, there are conspiracy theorists saying the attack was part of a Jewish-American-Western plot.

Charlie Hebdo is attempting to remain optimistic in these dark days. In a passionate appeal for France’s brand of secularism, which underpins the republic, Biard says: “We hope that from 7 January 2015 the firm defence of laicity [secularism] will be obvious for everybody.

“All the millions of people who have said ‘I am Charlie‘ since last Wednesday must know that the expression also stands for ‘I am laicity’.”

Charlie Hebdo‘s brand of humour has never been to everybody’s taste, and the weekly had been struggling to keep going with a readership of only 60 000. With this edition, which is to have a print run of five million and will be sold all over the world, the magazine has been reborn. – © Guardian News & Media 2015