Lost in translation: ‘Hilarious’ mistakes can be dangerous, too 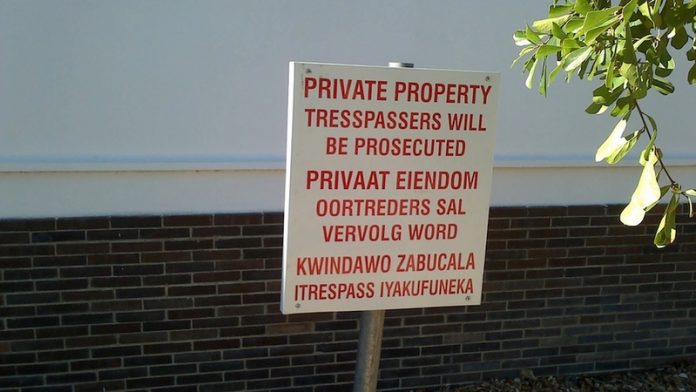 If African language speakers were litigious, they could have a lekker time in South Africa. Here are a few possible scenarios, based on mistranslated signs seen around Cape Town (some of them since corrected).

Non-African-language-speaking official: “Hey, can’t you read this sign? You aren’t allowed to be here, so I’m arresting you!”

isiXhosa-speaking citizen: “Oh yes? In fact, your sign tells me a TRESPASS is needed (itrespass iyakufuneka). See you in court!”

Non-African-language-speaking official: “Why are you selling things in a NO HAWKING area? That’s not allowed.”

isiXhosa-speaking citizen: “No, the sign says nothing about no hawking. It says no walking (akuhanjwa). Your isiXhosa translator must have misheard you. Watch it, you will get arrested if you carry on tramping around the place.”

Non-African-language-speaking official: “You can’t have a picnic here unless you’ve booked. The sign clearly says that. You’d better leave.”

isiXhosa-speaking citizen: “Sorry, bru, but this sign doesn’t say anything about booking. It says if I want a picnic here I can bring a book (Ungazisa incwadi xa ufuna ipikniki). See, here’s my book. It’s War and Peace by Leo Tolstoy.”

And so it goes on. In the Western Cape we have had signs that have told us to “mount the bus driver” in isiXhosa instead of “Get on the bus”. (This one has been removed after complaints, but some bus drivers must be missing the sexual excitement.)

Medical questionnaires that require you to select the description that “fits” actually ask the isiXhosa-speaker to pick the answer that has epileptic fits (iyaxuzula) – the translator apparently blissfully unaware of the different meanings of “fit”.

Some signs don’t make any sense in the African language and, like the garbled gestures of the sign language interpreter at Nelson Mandela’s memorial service, are gobbledegook. Hilarious perhaps, but also misleading and potentially dangerous.

At an Eastern Cape beach, a sign warning of what you should do if caught in a riptide tells you (in English) to look at the pictures. In the isiXhosa version there is a garbled reference to water pictures – and then, to add insult to injury, the annotations on the pictures are not translated into isiXhosa at all. What the hell? If you don’t speak English, we’ll let you drown.

In Sierra Leone only 20% of the population speak English, but for some time all the warning pamphlets about Ebola were in English only.

What about here, in South Africa, eMzantsi Afrika? If we have 11 official languages spoken by more than 70% of the population, why are there such poor translations in those languages? I discussed this with former isiXhosa schoolteacher and now MP Thandi Mpambo-Sibukwana, a wonderful wordsmith and language specialist, and she put her finger on the problem: it all depends on who does the translation.

Although we do have brilliant trained translators who have sufficient knowledge of both the source language (English) and the target African languages to produce meaningful text, there are not enough of them. And the number of African language scholars and postgraduate students is pitifully small: English is high status, whereas African languages, as linguistics scholar Professor Vivian de Klerk of Rhodes University discovered, are regarded by many young people in the townships as mere “domestic appliances”. Some of my students – first-language speakers of African languages themselves – report that they are laughed at for studying African languages.

No wonder that, if you’re the official who has to produce a sign in a hurry and you don’t know anything about African languages (and maybe you really don’t give a toss either), you just ask the nearest available person who happens to understand the two languages to do the job, “quick, quick, my bru”. That kind of carelessness is why “hawking” gets mixed up with “walking”. That’s how the “mad, mad prices” you’re advertising to attract people to your super-cheap products become “mentally unstable prices”, which might raise a laugh but isn’t likely to land you a sale.

If you care about translation, you’ll at least do the following.

Second, confirm that the translation carries the meaning of the source language by having it independently back-translated (for example, getting your isiXhosa translation translated back into English and comparing that with the original wording).

Third, have the translation proofread by a competent speaker of the target language. (I remember a menu in Greece describing a vegetable dish as “fried aborigines”, and I’ve certainly come across many similar howlers in isiXhosa texts, which would have been eliminated by proofreading.)

There are many more issues to consider: culture, dialect, conceptual gaps, register, word play, humour … the list seems long, but with common sense and respectful attitude to the target language, the rest will follow.

Dr Tessa Dowling is a senior lecturer in African languages in the University of Cape Town’s School of Languages and Literatures. She will be giving a lecture on translation in South Africa, entitled “Trespassers welcome but please don’t ravish the bus driver”, at UCT’s Summer School on January 22 at 7.30pm. More information about the Summer School can be found at www.summerschool.uct.ac.za