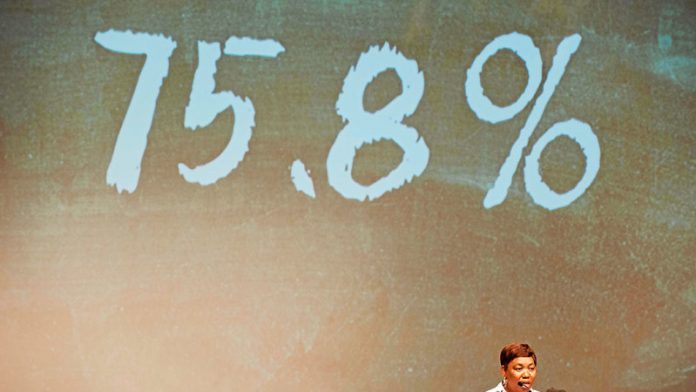 One of only four tables about the 94 000 part-time matric 2014 candidates – in more than 900 pages the government has released on the results – gives information that educationists say misleads the public.

In matric 2014 technical report, which the basic education department released last week, the table concerned provides the results of all 94 884 part-time candidates in “selected subjects” – 11 out of 58 examined.

The single line below the table reads: “The performance of part-time candidates has improved for the following subjects: mathematics, physical science, business studies and geography.”

The president of the National Professional Teachers’ Organisation of South Africa (Naptosa), Basil Manuel, told the Mail & Guardian the table “is indeed misleading … Only geography has improved.”

“Maths, science and business studies have all shown a drop.”

Not only does the table show a drop in achievement between 2013 and 2014, it also shows a drop in many subjects compared with even 2010’s results.

The department did not respond to requests for clarification.

Long-standing problem
The bungle is symptomatic of a long-standing, widespread information blackout about a large group of matric candidates, including part-timers, whose results aren’t used to calculate the national pass rate (“Angie fails the test for accountability”, M&G, January 9).

Factoring in the 532 860 full-time candidates who wrote matric 2014, the part-time group equalled 20% of the full-timers and comprised 15% of all who wrote.

“The lack of detailed information is highly dubious,” said John Aitchison, emeritus professor of adult education at the University of KwaZulu-Natal.

“Generally weaker pupils, or adults who dropped out of school, register as part-time candidates. Their results are much worse than the full-time candidates’ results and it is these that the department does not want to get out.”

Aitchison sat on the standardisation committee of the state’s quality assurance and monitoring body, Umalusi, for many years.

Some part-time candidates write exams for “what could be seen as an old, easier, second-class version of matric” in June; and a second group writes examinations for the new curriculum at the end of the year, he said.

Lower pass rate
Many don’t write the full complement of six subjects, “so it is hard to work out what both groups’ pass rate is. But for those who wrote six subjects in the old exams, the pass rate in 2013 was 33%.”

Part-time candidates mostly enrol at state-funded public adult learning centres (PALC) but some do so at fee-paying private centres.

Manuel said many of these part-time candidates were victims of “gatekeeping” by schools that “encourage or coerce struggling pupils to register as part-timers to improve the schools’ chances of good pass rates”.

In a technical briefing on January 5, a few hours before Basic Education Minster Angie Motshekga announced the results, the department gave Naptosa and stakeholders an indication of why it never, as a rule, releases any fuller results of the part-timers.

“We were told that very few part-timers do a full cohort of subjects and, as a result, it is very hard to report on the pass rate, but that it can report on subjects,” Manuel said. “We were shown those results in a slide show and they included how well [some] part-timers did – those who got above 70% or 80%, for example. But we were never given a document with this information in it. I think this is because the department does not want us to share it with anyone.”

He suspects the department doesn’t make the “high failure rates” of part-time candidates public because “it doesn’t see them as important”.

Money wasting
Doing so would also “lead to uncomfortable questions about oversight and accountability in the PALCs, as well as accusations of money wasting”.

Naptosa “views the information available on part-time candidates as inadequate”, he said.

“We need more information to test the success of the part-time system and the success of individual centres. Those centres with the largest dropout rates or no-show rates must be investigated. We must also guard against these centres becoming dumping grounds for schools that are gatekeeping.”

Aitchison said if there were “these many people doing these exams, then their results need to be released properly so we can apply the same amount of analysis and comment as we do for the regular matric results”.

“The writing of the exams by part-time candidates has not been monitored correctly. The old exams, which were supposed to be phased out years ago, and their results need to be very thoroughly scrutinised – and even by now neither the

department nor Umalusi have done that. There have been irregularities in the past over the administration of the exams and I have anecdotal evidence of cheating in these centres.”